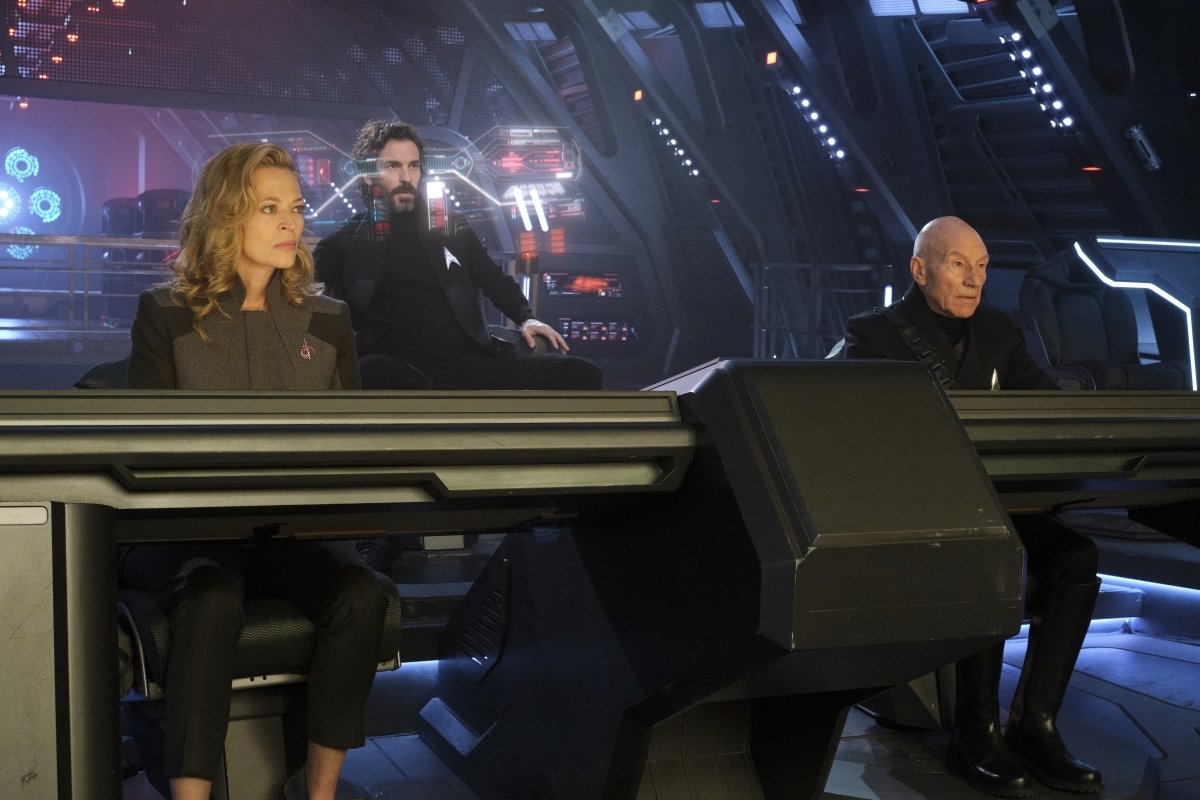 If you’ve never seen Star Trek IV: The Voyage Home, it’s maybe hard to imagine it even existing. Unlike many other famous science fiction films, what makes The Voyage Home so absurdly good is that it’s equal parts ridiculous and brilliant. It makes a statement about conservation and ecology but also has a very silly chase scene in which Captain Kirk and Dr. McCoy break Chekov out of a hospital. These days Star Trek: Picard season 2 isn’t playing all the Star Trek time travel tropes for laughs, but, starting with episode 3, “Assimilation,” the series is doing a pretty serious Voyage Home homage in the best way possible.

The way the latest episode of Picard begins remixing The Voyage Home starts pretty quickly at the top of episode 3. As teased in the previous episode, the La Sirena crew uses the old-slingshot-around-the-sun time travel trick perfected by Kirk and Spock. Although this “cruder method” of time travel originated in the 1967 TOS episode “Tomorrow Is Yesterday,” it was visually made famous by The Voyage Home in 1986. And, just like in The Voyage Home, the crew is in a stolen ship that isn’t really “theirs”; the alternate timeline La Sirena, versus the stolen Klingon-Bird-of-Prey, nicknamed HMS Bounty.

Both stolen time travel ships have technical problems right away, which extends to the transporters. And, then the spotty transporters lead to the away teams getting separated from each other. Dramatically, this results in Rios materializing in mid-air — something Star Trek has teased can happen, but almost never does — and then falling to the pavement and getting seriously injured. In The Voyage Home, Chekov has a similar fall and ends up in a hospital, just like Rios.

But this gets a little more layered when we look at how people treat both Rios and Chekov and the reasons why. In both stories, Rios and Chekov are treated with prejudice and suspicion not because it seems like they’re time travelers, but because of their ethnicity. Chekov is assumed to be a Russian spy, and Rios is targeted by ICE, only because he’s not white. On top of it, Rios does scan as an immigrant without papers.

In another meta-Trek reference, Rios’s predicament is also eerily similar to what happens to Bones in “City on the Edge of Forever,” complete with a humanitarian caretaker. Our new Edith Keeler is a kindly doctor named Teresa (Sol Rodriguez), who is willing to help Rios, regardless of his background. Let’s hope Teresa isn’t destined to die to restore the timeline!

Either way, what Picard is doing with these tropes is smart: When you take the Star Trek people out of their egalitarian future, and drop them in the past, optimism alone won’t actually save them. In The Voyage Home, the prejudice shown toward Chekov is mostly played for laughs, but the message is pretty similar: Earth is always just a few missteps away from turning into the discriminatory “totalitarian nightmare” Jean-Luc and the crew just witnessed in an alternate future. In this way, Picard is doubling-down on some of the themes first broached in “Encounter at Farpoint.”

From a macro viewpoint like Q’s, the human race has a pretty bad track record. And, in Trek canon, the mid 21st century was possibly the worst moment in human history. In the 1960s and the 1980s, the idea of a terrible world war some time in the 21st century seemed far enough off to be both plausible and avoidable. But, Star Trek: Picard season 2 is confronting the reality of our contemporary world, and weaving it into a Star Trek time travel story, using the structure of The Voyage Home, without actually ripping off that film. As Seven says, “maybe the [terrible] future we saw starts right here.”

Picard season 2 may lack the subtlety of some Treks before it, and as we’re in the thick of the story, it seems a bit hopeless. But, just as Bones says “it’s a miracle these people made it out of the 20th century” in The Voyage Home, Raffi is similarly confused as to how a society can function with “so many contradictions.”

Star Trek is often lauded for giving hope and optimism for a better future and a united world. But, because most of Trek takes place in that better future, we tend not to see the work that was required to get humanity to that point.

“Assimilation” also references the Star Trek: Deep Space Nine episodes “Past Tense Parts 1 and 2” because we see Raffi and Seven walking through a “sanctuary district” full of homelessness. This isn’t lingered on very long, but the idea that Raffi and Seven are both kinda unfamiliar with a wealth gap on Earth is jarring. It’s a reminder that the great future forecasted by Star Trek is, in some sad ways, still mostly a dream.

The Voyage Home confronted movie audiences with the reality of what Greenpeace was doing to save endangered species. But, what DS9 did with “Past Tense,” and possibly, what Picard season 2 is doing now, is to confront that sunny Trek optimism with a different endangered species: humanity itself. Jean-Luc, Rios, Raffi, Jurati, and Seven are all trying to save the future, but unlike some other Trek stories, they’re going to have to work for it. What happens now matters just as much as what happens in the future. And maybe that’s a message Star Trek should be sending more often.