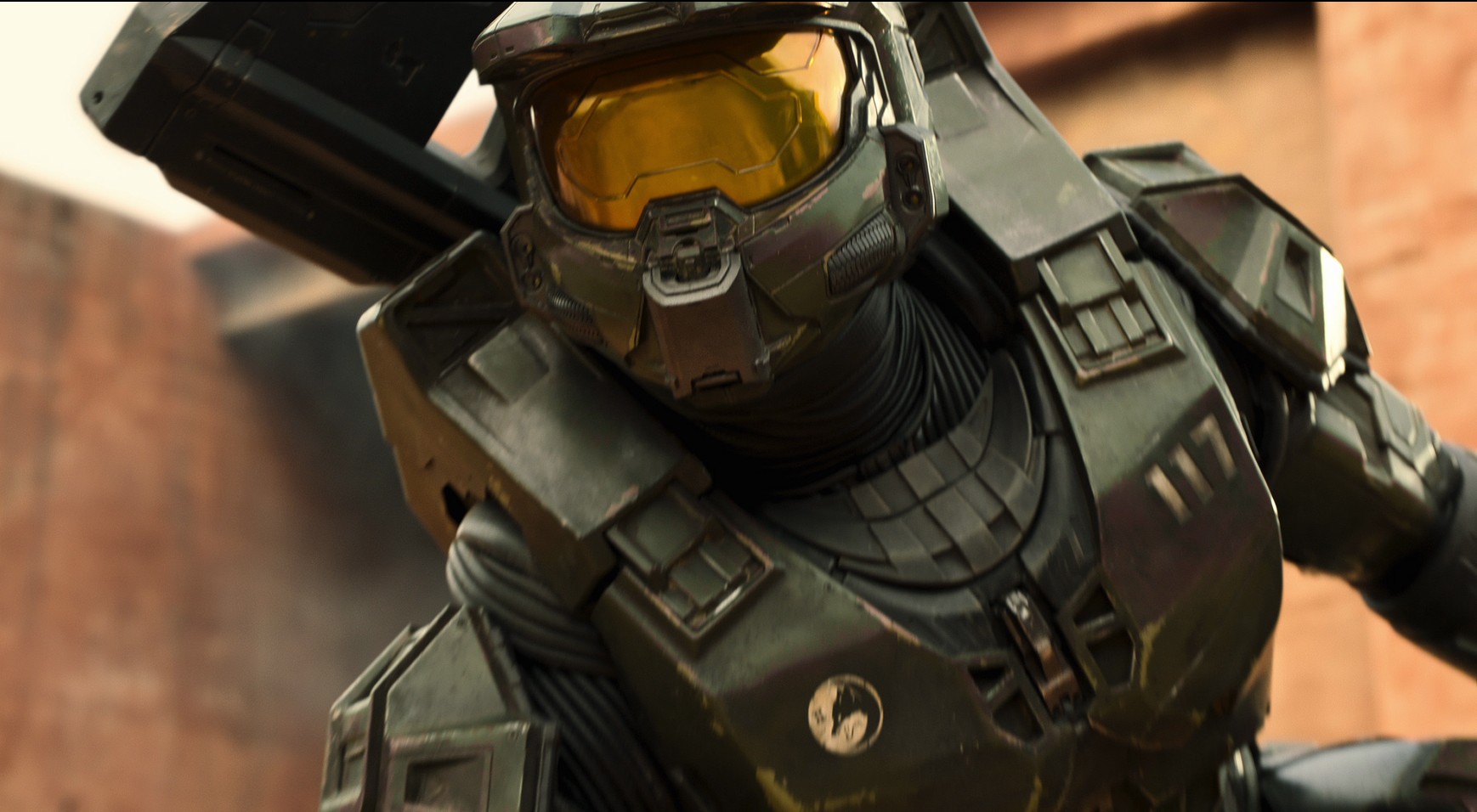 2022 is a strange time to release a Halo TV show. While the franchise was a hot topic in Hollywood in the 2000s, the Halo series as a whole seems like less of a juggernaut today. While the latest game, Halo Infinite, was well received, there simply isn’t the whole-hearted enthusiasm the series garnered in the days of the original Xbox and Xbox 360. Is the age of Halo over? Is the TV show the start of a new golden age for the franchise?

The first episode answers “no” to both questions, while offering up some decent sci-fi entertainment. There’s some geeky fun to be found in “Contact,” if not quite enough polish and shine.

Quick clarification: the TV series is not canon to the games, per se. Instead, an alternate “Silver timeline” established for the show allows the creators to mix-and-match familiar concepts from the games, books, and comics in any way they see fit for the new medium.

Our point of view character is primarily Quan Ah (Yerin Ha), the daughter of a general leading a settlement on the planet Madrigal, which seeks independence from the government that rules both Earth and all of humanity’s colonies in space. Although she’s up to teenage hijinks at the start of the episode, it’s not long before her life becomes irrevocably intertwined with Spartan Master Chief John-117 (Pablo Schreiber).

Like in the games, the Spartans like Master Chief are surgically-enhanced soldiers wearing high-tech powered armor. But unlike the surface reading of the games, the Spartans aren’t treated as the heroes here. Quan sees them as the fist of a restrictive empire. Before the alien Covenant attacks Quan’s base and slaughters everyone except her, the colonists consider Master Chief’s division of super-soldiers to be the ultimate enemy.

Complicating things is that the Master Chief is beginning to remember things the UNSC forced him to suppress. Touching an alien artifact makes him remember his own long-lost childhood and family. That’s a problem for UNSC scientist Catherine Halsey (Natascha McElhone), the creator of the Spartan program, and Admiral Margaret Paragonsky (Shabana Azmi), UNSC intelligence master. Concerned they can’t control their best living weapon any more, they attempt to force Chief and Quan to return to base for a “debrief” that could prove fatal for at least one them. Ultimately, the attempt fails, and the two unlikely shipmates head off into the galaxy to discover the rest of the season (and, presumably, the titular Halo ring).

There’s a lot going on in this first episode, and we’ve hardly touched on Halsey’s daughter Miranda (Olive Gray); the cloning project which presumably has something to do with Cortana; or Makee (Charlie Murphy), a human raised among the Covenant. Quan’s planet is also the source of a plant that produces a drug used for everything from powering starships to recreational highs (not unlike the Spice from Dune). With all this in play in the first episode, “Contact” is both a smorgasbord of easter eggs and references for Halo lore fans and a bit overwhelming for viewers who haven’t spent much time with the tie-in books.

Citing a Star Wars influence is almost a cliché itself when talking about science fiction, but Quan’s interactions on Madrigal have a distinctly Tatooine feel. The comparison doesn’t extend to the idea of practical sets or creatures, though. The alien animation is detailed and scatters light beautifully, but the budget strains against the show’s admirable desire not to skimp on the creature shots. I have to wonder what Halo might look like if it had an Apple-funded budget like the incredibly cinematic Foundation series. Instead, the primary joy of seeing Spartan and Covenant aliens zapping each other comes from recognition rather than the lackluster CGI.

Halo sound effects pack the opening battle full of nostalgia and a perfect, fun shorthand for the mix of whizz-bang and military science fiction tone the series goes for. Close-up shots also work better than the far-off ones, with the fight choreography effectively portraying the Elites’ deadliness and weight when characters are allowed to get close to them.

Zooming in, the show set out to present Master Chief as more outwardly expressive than in the games, and Pablo Schreiber makes a good first impression. It’s hard to not to compare his performance to the both softer and deeper voice of Steve Downes, or the surgically beefy animated character, but Schreiber’s glimmers of confused humanity show promise for this take on Chief.

Yerin Ha balances portraying a believable teen and a burgeoning soldier pretty well, although the script doesn’t always give her enough to dig into. She briefly shows her chops in a scene where she’s asked to create a propaganda video against her own faction, playing it just conniving enough to still be vulnerable. Quan’s interactions with Chief require her to move rapidly from shell-shocked to on-the-move, though, and I hope future episodes dig into them as people a little more. (A scene where Chief attempts and fails to tell a joke also admirably tries to be heartfelt and funny, but comes a little too early in both the character relationship and the world-building to really land.)

As a game lore fan, I’m pleasantly surprised the show is putting so much on the table so early. The initial descriptions of the “Silver timeline” as not quite a reboot but not quite canon were confusing. I’m probably showing my hand by taking a stance on them at all. Large portions of the fandom have flags staked firmly in the ground for how they feel about the last few years of the series, another reason the timing of the show seems strange. But, as a 2001 Halo fan, I find the decision to put the Insurrectionists in the foreground to be rich narrative fodder. In the games, we hardly see them at all; they’re simply a backstory for why humanity had super-soldiers ready to go when the alien crusade began. Now, they’re our eyes into the story.

There’s a sort of argument over utilitarianism going on here: the UNSC’s techniques are obviously duplicitous. (In the books, Paragonsky oversaw a project to sell weapons to Covenant rebels.) On the other hand, the Spartan program works. Or does it? Spartans don’t actually save the civilians in the first scene; Kwan’s survival is essentially an accidental by-product of the Spartans serving as indestructible cameras for the UNSC’s spies. Master Chief starting to figure that out might be the core of this series.

A major element missing from the first episode is a glimpse into how Halsey feels about Chief. It’s implied in the lore that their relationship is a sort of twisted facsimile of mother and son. That seems like a missing and load-bearing emotional pin in the subplot involving Miranda’s father, Jacob Keyes (Danny Sapani), and Halsey. But that can’t be present yet because the show needs to keep Chief’s past a secret.

Still, the show has neatly gathered many other story threads that are glossed over in the games. It was a treat to see Shabana Azmi as Paragonsky, a particularly deep lore cut. However, it might be a bad sign that a lot of the pleasure of the show comes from seeing the (alternate timeline) familiar faces, not the dynamics of the characters. The conversations among the UNSC characters are particularly slow, the sets sterile in a way that was probably intentional but borders on generic.

One episode in, Halo as a TV series is off to a competent but dull start. All of the statements about war and surveillance it might or might not be making will need to be backed up by some actual entertainment, especially if the show hopes to reach viewers inside or outside the fandom.

Why Seinfeld Was the TV King of Movie References
The Legend of Zelda: Who Created the Triforce?
Marvel’s Avengers Superior Seminar | Hulk
How to Get All Cyberpunk: Edgerunners Equipment in Cyberpunk 2077
Sci-Fi Short Film “Laboratory Conditions” | DUST | Starring Marisa Tomei & Minnie Driver