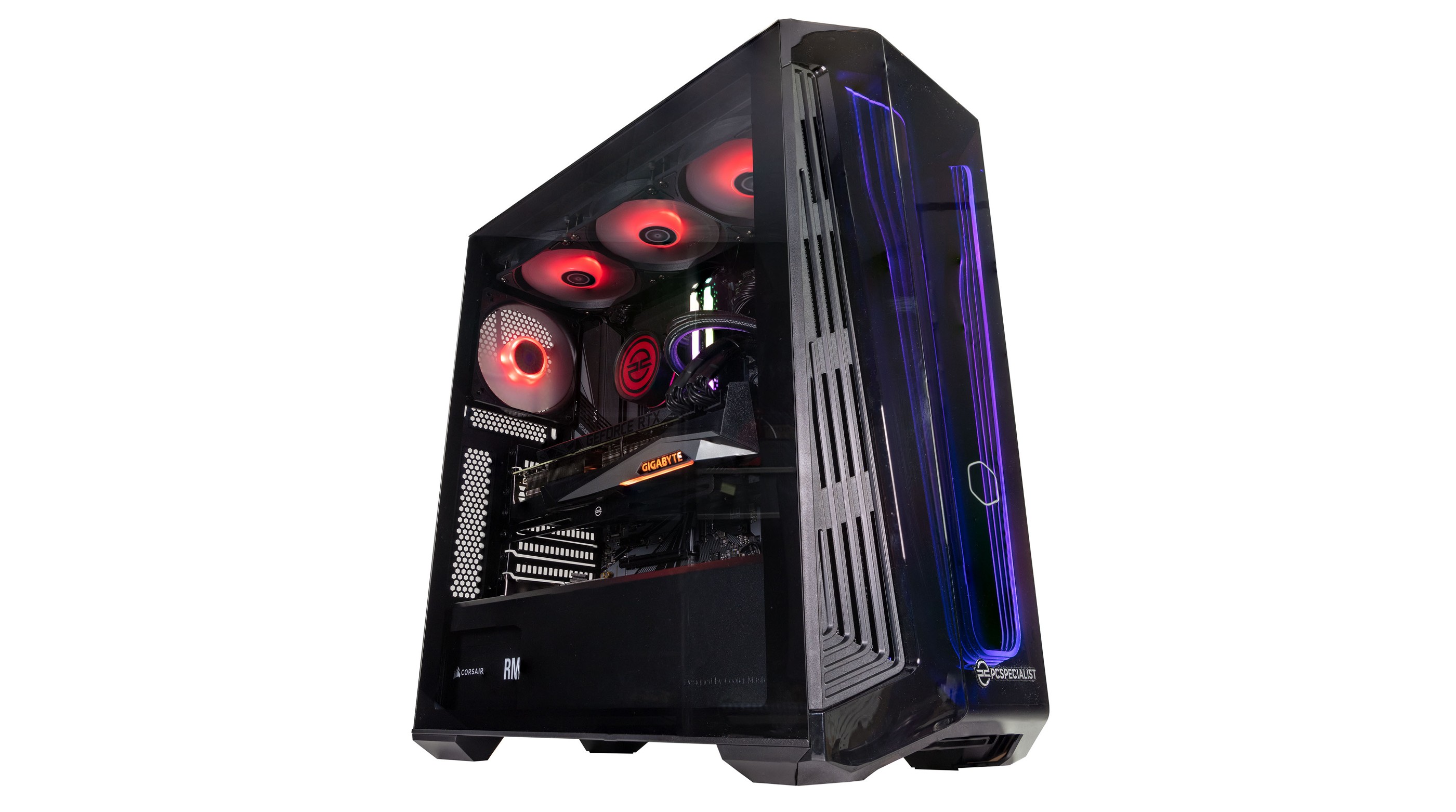 This review comes courtesy of:

It’s unusual to find an RTX 3080 Ti PC for under £3,000 at the moment, but PC Specialist has done it here – and by some margin. Impressively, the Gigabyte-made graphics card inside the Magnus Pro is an overclocked model with a 1710MHz boost clock, and the card’s 12GB of memory and 10,240 stream processors promise fearsome gaming pace.

It’s a good start, and NVIDIA’s GPU sits alongside one of Intel’s newest processors. The Core i7-12700K has eight Hyper-Threaded P-Cores that peak at 5GHz – barely slower than the same cores inside the i9-12900K – along with four power-efficient E-Cores.

The rest of the PC Specialist’s specification is solid: the Magnus Pro (£2,499) has a 1TB Samsung 980 Pro SSD with rapid read and write speeds of 7,090MB/sec and 5,177MB/sec, and a Corsair RM850x PSU with modular design and 80 Plus Gold certification. The inclusion of 32GB of 3600MHz RAM is good for content creation too. It’s DDR4 memory rather than DDR5, which isn’t ideal for futureproofing, but our tests show very little advantage of using DDR5 over DDR4 with 12th-gen Intel systems.

As the Gigabyte Z690 UD motherboard is a DDR4 model, you don’t get an upgrade path for faster memory either. The board has plenty of mod cons, though. Its primary 16x PCI-E slot supports PCI-E 5, it has three M.2 connectors that support 4x PCI-E 4, and it has 2.5Gbps Ethernet. There’s an extra CPU power connector, and loads of on-board headers for cooling and lighting as well.

Meanwhile, the rear I/O panel sports a USB 3.2 Gen 2×2 Type-C port that handles 20Gbps transfers, alongside nine other USB ports of varying speeds. PC Specialist has also added a dual-band 802.11ax Wi-Fi card. The board’s biggest issue is audio – its entry-level Realtek codec is partnered with three rear outputs and no optical S/PDIF. That’s fine for everyday use, but it’s a bit lowly in a machine at this price.

The board isn’t littered with lights either, but that doesn’t matter thanks to the Cooler Master MasterBox 450 chassis. The case’s chunky fascia highlights a dramatic strip of RGB LED lighting that can be customised with software or a control box behind the machine’s rear panel. The bold plastic strip combines with the lights on the graphics card, memory and powerful PC Specialist FrostFlow 360 AIO liquid cooler to create a dramatic interior.

The build impresses in practical departments too. The case is robust, the CPU cooler doesn’t impede on the motherboard and there’s plenty of room to work. The top of the case has a USB 3.2 Gen 2 Type-C port, and around the back, you’ll find neat cabling and room for pairs of 2.5in and 3.5in drives.

PC Specialist’s standard warranty offers three years of labour coverage, one year of parts protection and one month of collect and return service. That’s fine, but not the best deal around – you ideally want at least two years of parts cover on a machine at this price.

The overclocked RTX 3080 Ti delivers fantastic pace. At 4K, it returned playable frame rates in Assassin’s Creed Valhalla, with a 99th percentile minimum of 50fps with a 68fps average. It dropped down to a 99th percentile of 38fps in Cyberpunk 2077, but that figure improves to 41fps if you enable Medium ray tracing and DLSS – you’ll easily be able to get this rig playing demanding games such as this at 4K if you tweak your settings a bit.

Likewise, Metro Exodus isn’t a cakewalk with ray tracing enabled, with the Magnus Pro dropping down to 38fps at 4K, but enabling DLSS saw this figure go up to 50fps. The machine also rattled through our Doom Eternal 4K test at 237fps, with a 99th percentile result of 146fps. This RTX 3080 Ti has a solid lead over the RTX 3080, and the PC Specialist also offers similar gaming speed to the Core i9-powered Scan machine. The only way you’ll get more grunt is with an RTX 3090, and even then, the difference won’t be significant.

It’s no surprise that the PC Specialist keeps up with the Scan in games – the Core i7-12700K virtually matches the i7-12900K in lightly threaded workloads, even if it does fall behind in multi-threaded benchmarks. It’s faster than the Ryzen 9 5900X in most tests too. Ultimately, the Core i7-12700K is a great all-round processor for tough workloads and content creation, as well as gaming.

Thanks to its 360mm AIO liquid cooler, PC Specialist’s machine is a good thermal performer too. During gameplay and work benchmarks, the noise remained modest, and the CPU and GPU delta Ts of 51°C and 43°C are fine. Performance isn’t an issue either – the processor’s P-Cores ran at 4.7GHz during multi-threaded benchmarks and 5GHz in single-threaded tests.

The Magnus Pro is a mightily impressive machine for the money. Its overclocked graphics card delivers loads of gaming pace, the Alder Lake processor is fast, and the case is good-looking, quiet, and accessible. You only get DDR4 memory and entry-level audio, but these small compromises are more than acceptable at this price. If you want a quiet, powerful and relatively affordable PC for top-end gaming and work, few are better than this example.

+   Cheaper than most rivals

Warranty
One year parts and labour with first month collect and return, then two years labour only return to base