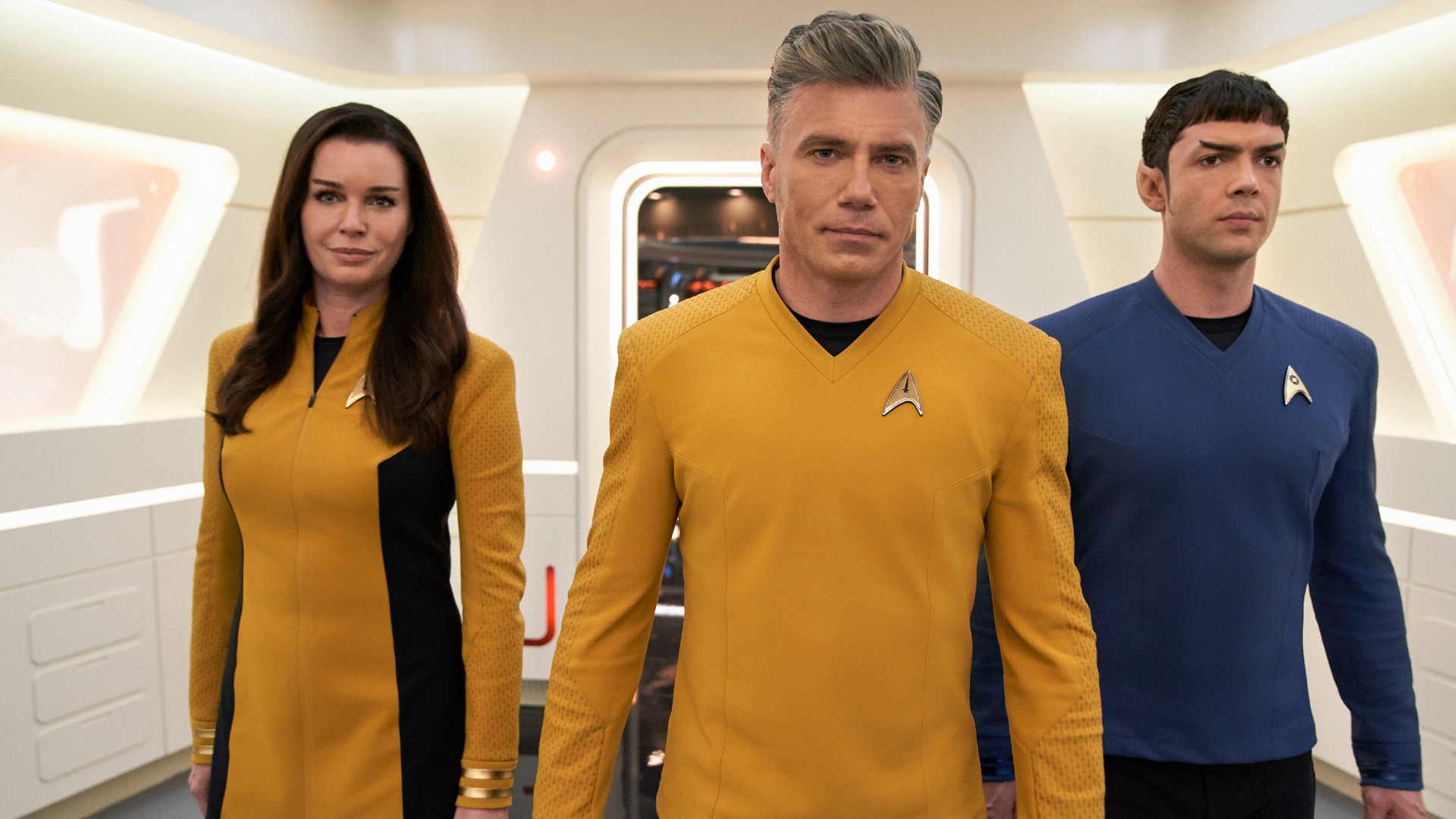 The final frontier is getting fun. A new full-length trailer for the upcoming series Star Trek: Strange New Worlds has dropped, and the name of the game is classic, lighthearted space adventure with phasers a-blasting. For Trekkies who have craved a retro approach — but with great production values and VFX — Strange New Worlds seems to be the most fan-service oriented Star Trek project in a very long time. It’s not quite Galaxy Quest as actual Star Trek, but it feels close, in a good way.

But, the unique thing about the trailers for Strange New Worlds is the interesting way that deep-cut Easter eggs are appearing. Basically, there’s just a bunch of stuff we didn’t see coming. Oh, and did we say trailers rather than trailer? Yes, although the new minute-and-a-half full trailer for the series has been getting a lot of attention, Paramount+ has also been dropping 30-second character spotlights on social media for a week. That means, if you squint, there have been about ten new Strange New World trailers in the past week or so. In all of those, and perhaps more, here’s five of the biggest Easter eggs we spotted, and what it all might mean.

In the full-length trailer, we clearly see the Enterprise going toe-to-toe with a big, circular alien warship. Although it’s not the exact same ship, this design is similar to the Orion scoutship, created for the 2007 remastered version of the TOS episode “Journey to Babel.” Elsewhere in the main trailer, it looks like Captain Pike (Anson Mount)  has been kidnapped by at least one Orion, so just like Discovery Season 3 and Lower Decks, it appears Strange New Worlds is doing deep on Orions.

But, in the 30-second spot focused on Lt. Ortegas (Melissa Navia), we also see what appears to be a Tholian Web forming around the Enterprise, just like in the TOS classic “The Tholian Web.” Canonically, we know Starfleet knew about the Tholians before that episode because Spock quipped about the “renowned Tholian punctuality,” in that episode. (Which was a line added by Leonard Nimoy!) And, in the Short Treks episode “Ask Not,” Pike also mentions the Tholians while testing Cadet Sidhu (Amrit Kaur).

In each of the 30-second trailers for Number One (Rebecca Romijn), La’an (Christina Chong) and Chapel (Jess Bush), we get more hints about the connection between La’an Noonien-Singh and everyone’s favorite genetically engineered madman, Khan Noonien Singh. In the La’an-centric trailer, she alludes to having been a survivor. In the Chapel trailer, Nurse Chapel hints that they are going to “mess with your genome,” which seems like an allusion to her having been genetically engineered. Finally, in the main trailer, the Number One trailer, and the La’an trailer, we see Number One and La’an brawling in what can only be main Engineering. This scene is very reminiscent of a fight between Kirk and Khan in the same exact place in the TOS banger “Space Seed.”

At this point, we have to assume that La’an is an Augment, or, somehow previously connected to the Augments. This is very interesting considering that Star Trek: Picard is seemingly creating new canon about Augments and genetic engineering in the early 21st Century. Could there be a connection between La’an and Adam Soong? What about Arik Soong from Enterprise?

Trek Twitter lost its collective hive mind over the footage of Spock (Ethan Peck) and T’Pring (Gia Sandhu) when these various trailers dropped, which is understandable. In the TOS classic “Amok Time,” T’Pring was Spock’s betrothed bride, and it seemed like he hadn’t seen her since they were both kids. So, if this is T’Pring, Spock meeting her pre-TOS could scan as a canon hiccup. However, on top of the fact that we don’t know for sure if this is T’Pring, there’s also a precedent for this.

The person who gave Spock the majority of his backstory, writer D.C. Fontana, also penned a 1989 novel called Vulcan’s Glory, which depicted Spock’s first mission on the Enterprise with Captain Pike and also a meeting between Spock and T’Pring pre-”Amok Time.” In Fontana’s novel, T’Pring and Spock don’t get near as cozy as they appear to be getting here, but, nonetheless, the meeting did happen. In that novel, T’Pring was basically calling Spock out for not taking care of his duties as her betrothed on Vulcan, and giving him an ultimatum to figure out when their wedding would happen. It’s possible that Strange New Worlds could be doing something very similar.

In the full-length Strange New Worlds trailer, we clearly see one scene where Ortegas is wielding a sword, while dressed as a pseudo-Musketeer. While you could argue this is a general Easter egg for the entire vibe of The Original Series, the specific Easter egg is likely “The Naked Time.” In that episode, Sulu (George Takei) ran around the ship with a sword. Like Sulu, Ortegas is the helmsperson/flight controller. This means that yes, Strange New Worlds is giving us another Enterprise helmsperson who is great at sword fighting!

Then again everybody got a sword in “The Day of the Dove,” so we could guess that maybe something like that is going on here.

Although the vast majority of the Strange New Worlds trailers are upbeat and fun as hell, the 30-second spot focused on Pike does specifically connect to the darkest revelation of Discovery Season 2, specifically, the idea that Pike is aware of the tragedy that will result in his mind being cut off from his body. In The Original Series classic, “The Menagerie,” this has already taken place, but in the Discovery episode “Through the Valley of the Shadows,” Pike specifically glimpsed his fate thanks to a time crystal, and was locked into that destiny as a result. In the short Pike trailer, he says, “I know exactly how and when my life ends.” And, that segment, and the longer trailer, Spock seems in on this discussion saying, “No one can know the future.”

It also appears that Pike will be haunted by the vision of his future in several moments. In addition to several scenes that are actually taken from Discovery, we get a creepy moment where Pike sees a reflection of his future self in the amr of his command chair. Could this future memory storyline play out in a big way? Will it change what we know about TOS? Or will it get retconned?

Even though Strange New Worlds is charting a new direction for the Trek franchise, one thing is clear: Everything that happened in TOS still matters, and everything in Discovery Season 2 matters, too.