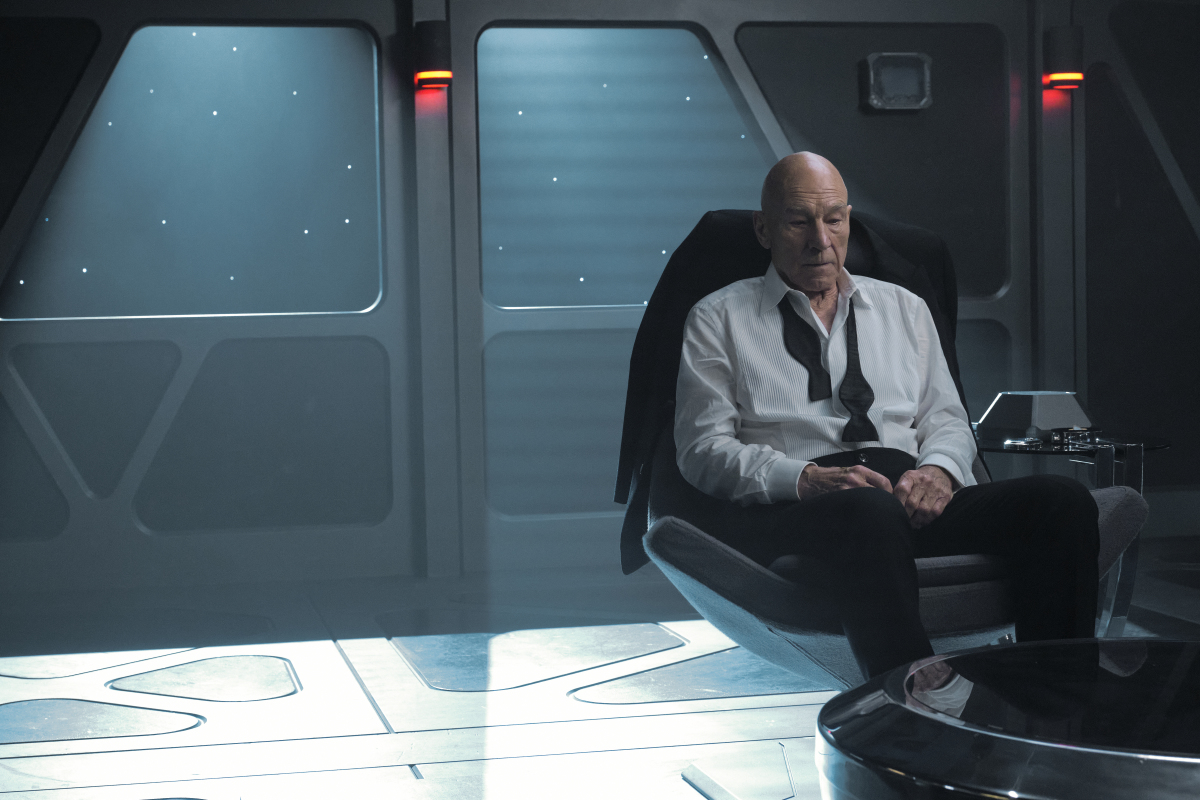 After two fairly exhilarating and propulsive episodes, Star Trek: Picard pumps the brakes on almost all forward narrative momentum in an hour that, unfortunately, goes back to some of Season 2’s weakest elements (and even the great cliffhanger at the end, which sees Guinan and Picard get arrested by the FBI thanks to some unfortunate security camera footage, can’t entirely save it).

Part of the problem is much of “Monsters” revolves around a trope that’s kind of lame even when it’s executed well, which involves one character being forced to enter the mind of another in order to help them subconsciously fight the demons that plague them. And perhaps there’s a way Picard could have pulled this off—a better set-up for Jean-Luc suddenly finding himself trapped in his own mind besides randomly getting hit by a car might have helped, or having someone like Seven or the Borg-controlled Jurati have to be the one to basically mind-meld with the admiral in order to save him, rather than a character we’ve essentially only just met.

As it stands, sending Tallinn into Picard’s childhood nightmare feels like nothing so much as a set-up for her to reveal to him that she’s secretly Romulan, and allow the show to continue pushing the supposed romantic connection between Jean-Luc and Laris. Which I assume someone, somewhere must find interesting, it’s just that I am not one of those people.

And the thing is, it’s not like I’m averse to an episode that’s essentially a deep dive into what makes Picard tick, subconsciously speaking. There’s something painfully poetic about the idea that the reason child Jean-Luc went on to become an adult who was willing to fight so hard to save others is that he couldn’t save his mother from the darker parts of her own mind. That’s practically Shakespearean, in many ways.

Of course, he carries emotional scars from those experiences, likely of the sort that he’s probably never really wanted to look too closely at. Again, all of this is completely understandable and deeply human. Where the story loses me is the bit where his grief over his mother’s madness literally rewrites his entire understanding of his own father and his role in his life. (Well, that, and the fact that Picard had a brother that none of these flashbacks ever mentioned in any way. How does he—and that relationship—fit into all this?)

To be fair, Picard’s dungeon of emotional sorrows is both beautifully and creepily rendered, a dark fairytale where his mother is somehow simultaneously the storyteller, the damsel that needs rescuing, and the monster threatening to destroy her. It’s a fascinating snapshot of how Picard thinks or, perhaps most importantly, of how Picard has become the storyteller of this particular piece of his own history. Though “Monsters” does raise the uncomfortable question of exactly how reliable a narrator Picard is in this instance, given the lifelong lies he seems to have told himself about both his mother’s behavior and his father’s intentions.

In any event, this isn’t exactly uninteresting character work, and “Monsters” certainly hints that we’ve still yet to see the full story of everything that went on between Picard and his mother. But I think we have to question the wisdom of inserting this particular interlude here, in a way that basically nearly brings every other plot to a screeching halt. How does this serve the story of saving the future and getting the La Sirena back to their own time? Why is it necessary to tell this part of the story right now, when Picard Season 2 finally felt like it was gaining some momentum?

The episode’s B plots are almost entirely forgettable, save for the fact that Seven figures out pretty much immediately that Agnes has been body-snatched by the Borg Queen, who’s now plotting to assimilate all of humanity. There’s zero development of Q’s nefarious plan now that Renee Picard is safely out of his clutches, nor do we learn anything further about the fallout from Kore’s discovery that she’s some sort of clone and her dad is basically a comic book supervillain. We don’t even see much of Agnes and the Borg Queen, save for a dramatic moment where she breaks a window in a dive bar for the high of the endorphin rush.

And, look, I’m sure that there are people watching who truly enjoy Rios’s flirtation with the nice 21st-century clinic doctor, and if that is you, please take a second and explain the point of this to me like I’m five, because other than potentially risking the very future Rios wants to go back to, what exactly is his character arc here? Simply that he wants to impress a girl by showing her his time-traveling spaceship? That he likes real, non-replicator-produced food? Forget causing butterfly ripples, these people are basically opening Jurassic Park at this point. (And that’s before we get to the whole the FBI now have video evidence of transporters thing.)

But, the episode’s last ten minutes is almost enough to paper over many of its other flaws, as Picard returns to see Guinan in the hopes that she can help him figure out what Q’s epic trial is really all about. And, in doing so, Picard answers another long-standing Star Trek: The Next Generation Mystery, namely—why Q seemed afraid of the El-Aurian in that series. And it turns out that part of the reason is because of the truce struck between their races long ago, Guinan’s people apparently have the ability to vaguely control him, or at least enough to summon him whether he is willing to be called or not. But her attempt in “Monsters” fails, but her confusion about it is so genuine that it seems obvious that something bigger is more likely at play. (More evidence that Q’s powers are waning or broken? Food for thought.)

But since we certainly aren’t getting answers to any of this until next week–let’s take a second just to appreciate Ito Aghayere’s performance—her younger version of Guinan is just so spot-on, from her warm chemistry with Patrick Stewart to her effortless snark and the physical mannerisms she’s clearly copied from watching Whoopi Goldberg’s Next Generation work. At this point, if we don’t get to see her face-off with John de Lancie properly before Picard and friends go back to their own time, it’ll be a real shame.