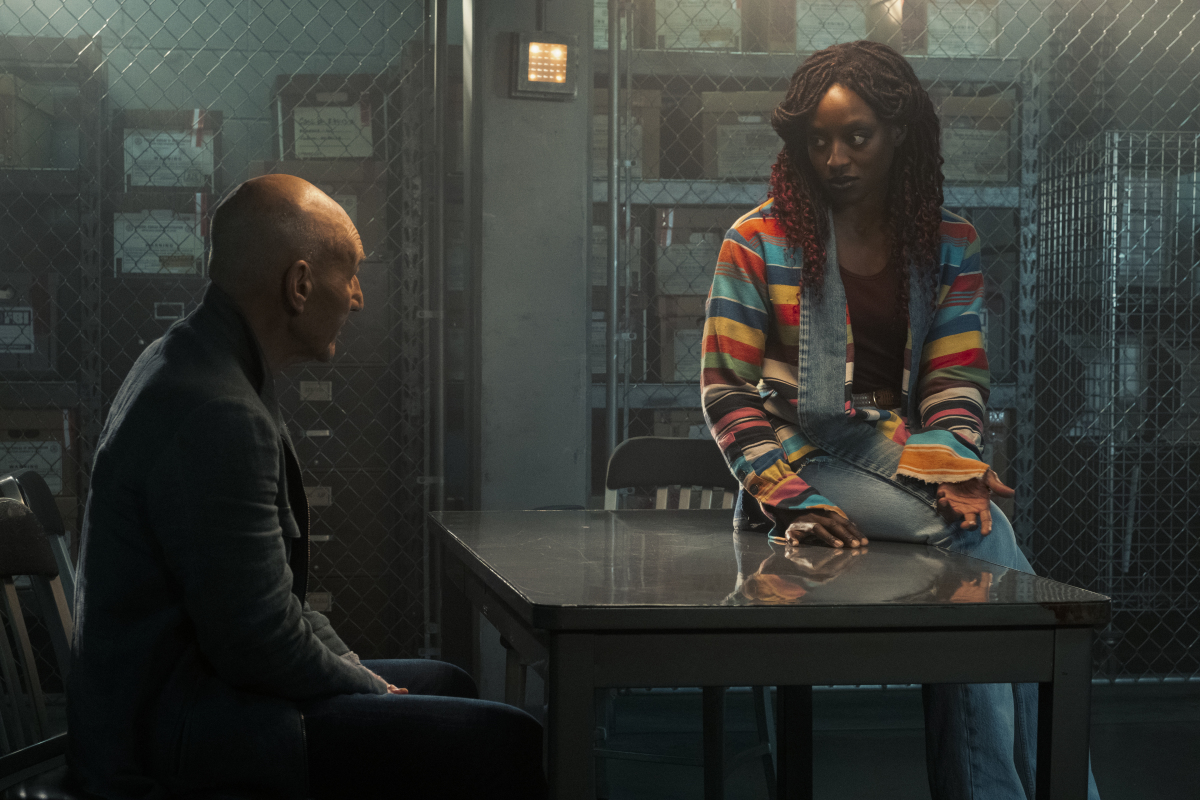 At this point, it seems like we all need to just admit that the pacing of Star Trek: Picard Season 2 is a problem. Its primary story has progressed in the barest of fits and starts over the course of the last two episodes, and rather than give us any concrete answers about Q’s plans, how Picard and friends can save the future, or what Adam Soong and his Orphan Black-style clone experiments have to do with anything, the show generally seems content to tread water, occasionally poking at interesting plot threads or character quirks as it sets up cliffhangers that largely go nowhere.

Look, even a mediocre Star Trek: Picard episode is better than a lot of things on TV right now, and with a cast that’s this consistently great it’s pretty easy to ignore the messy overall narrative in favor of simply watching them work. I mean, if this show was just about Jean-Luc and Number One living their best lives at the family vineyard, that’d probably be fine with me.

But Season 2 is ostensibly meant to be aiming higher than that. Or at least, the folks in charge told us it was. Yet, while there are certainly plenty of standout individual moments sprinkled throughout this season, it’s becoming more and more difficult to pinpoint what its central arc is supposed to be, or what larger point it’s working toward.

Is the primary story of this season about preventing a megalomaniacal god being from turning the future into a dystopian hellscape? Rewriting Picard’s own understanding of himself? Exploring the emotional scars he’s been afraid to look too closely at all his life? Something else entirely?

On the plus side, “Mercy” does at least recapture some of the lost momentum from last week’s installment, in that almost every plot takes major steps forward and the hour features the sort of necessary revelations that indicate that we’re moving into whatever the endgame of Season 2 will look like. Yet, it’s hard not to feel as though Picard is really dragging out our journey toward that final act, and with just two episodes to go in Season 2, that seems like a huge mistake. Because there’s almost no way that whatever that endgame is doesn’t end up feeling incredibly rushed, just because we’ve spent so much time on side quests and character moments that don’t necessarily (or, at least particularly clearly) tie back to the main narrative.

Part of the problem is that I think most of us (read: me) likely assumed Season 2 was going to be a fairly straightforward, though not necessarily simple, story. Picard and friends have to travel back to the past to put things right after some Q shenanigans threaten to turn the world as they know it into Authoritarian Disney. Sure, that’s probably not a light-hearted romp, but it should at least be a fun adventure, as our team has to figure out how to solve a very 24th-century problem using only 21st-century resources and work to conceal their identities along the way. This is something Star Trek has done many times in the past, after all. (See also: The Original Series epiosde “The City on the Edge of Forever” or Next Generation’s “Time’s Arrow”.)

Instead, we’ve ultimately gotten something that’s much more convoluted, with little sense of narrative urgency or even a clear end goal. And as a result, Season 2’s story manages to somehow feel both painfully thin and weirdly overstuffed at the same time. Because in all honesty, as entertaining as watching Picard and Guinan banter with a Fox Mulder-esque twenty-first century FBI agent is, it’s also not exactly an incredibly necessary piece of the story this season is telling. Though it’s certainly more directly impactful than virtually any plot involving Rios, the FBI twist serves little purpose beyond giving Picard a reason to be absent from the other major storylines going on at the moment.

It also feels more than a little bit like a cop-out. Part of the reason the previous episode’s cliffhanger worked so well is that it was such a great problem to force Picard to solve: There’s video evidence of the existence of transporter technology, along with some ill-advised quotes from Rios’s time in ICE custody, and photos of the gang essentially breaking-in to the Europa gala. How will Picard get them out of this? What will he have to risk, or sacrifice to do so? The answer is nothing, apparently.

To be fair, there’s something thematically appropriate about Picard offering this man a way to work through the major childhood trauma he’s been carrying around for most of his life. Especially given how much of Picard’s own story this season has revolved around a similar “stuck in the past” theme. But it’s also pretty hard to believe that one seemingly crazy old man’s explanation of a Vulcan mind meld would be enough to undo literal decades of fear and anxiety or convince this man to release the very beings he’s spent his entire life chasing. But, then again, if Patrick Stewart sat me down and gave me a heartfelt explanation about how he needed my help to save the future, I’d probably do whatever he asked, too.

(Plus, the confirmation that the Vulcans did indeed visit Earth prior to the official date of First Contact is nice.)

Despite the vague pointlessness of much of this subplot, it’s all almost worth it simply for the fact that we get to see Ito Aghayere’s Guinan and John de Lancie’s Q meet face-to-face. Picard hasn’t given de Lancie a lot to do in the past few episodes, but he more than makes up for it here, a towering presence that both questions what lurks in the undiscovered country after death and rages against the proverbial dying of the light that is his impending doom.

Most of us had guessed already that something was happening with Q—that he was likely dying or losing his powers in some way—several episodes ago. But we still have little idea why he chose to set this particular test for Picard, or why he thinks forcing his longtime nemesis to face his emotional failings is the thing that will give meaning to the twilight of his days. To be fair, de Lancie still sells the heck out of the material, poking at the uncomfortable idea that on a long enough timeline, everything loses its luster and even death starts to look appealing, simply for the fact of its newness. But just…imagine if this season had chosen to really center Q in this story alongside Picard, is all I’m saying.

At least it seems like the Borg Queen has a straightforward plan, even if it does involve assimilating all of Earth. (Does Picard even know Agnes has been body-snatched yet? Guess we’ll find out next week!)

The Last of Us HBO Series Trailer Reveals Nightmarish Clicker Designs
The Rings of Power: How Adar’s Origin Story Reignites a Long-running Tolkien Debate
Why Google Stadia Failed and Is Finally Shutting Down
How to Get All Cyberpunk: Edgerunners Equipment in Cyberpunk 2077
Taskmaster: Ranking Every Series From Merely Quite Good to Ludicrous Best