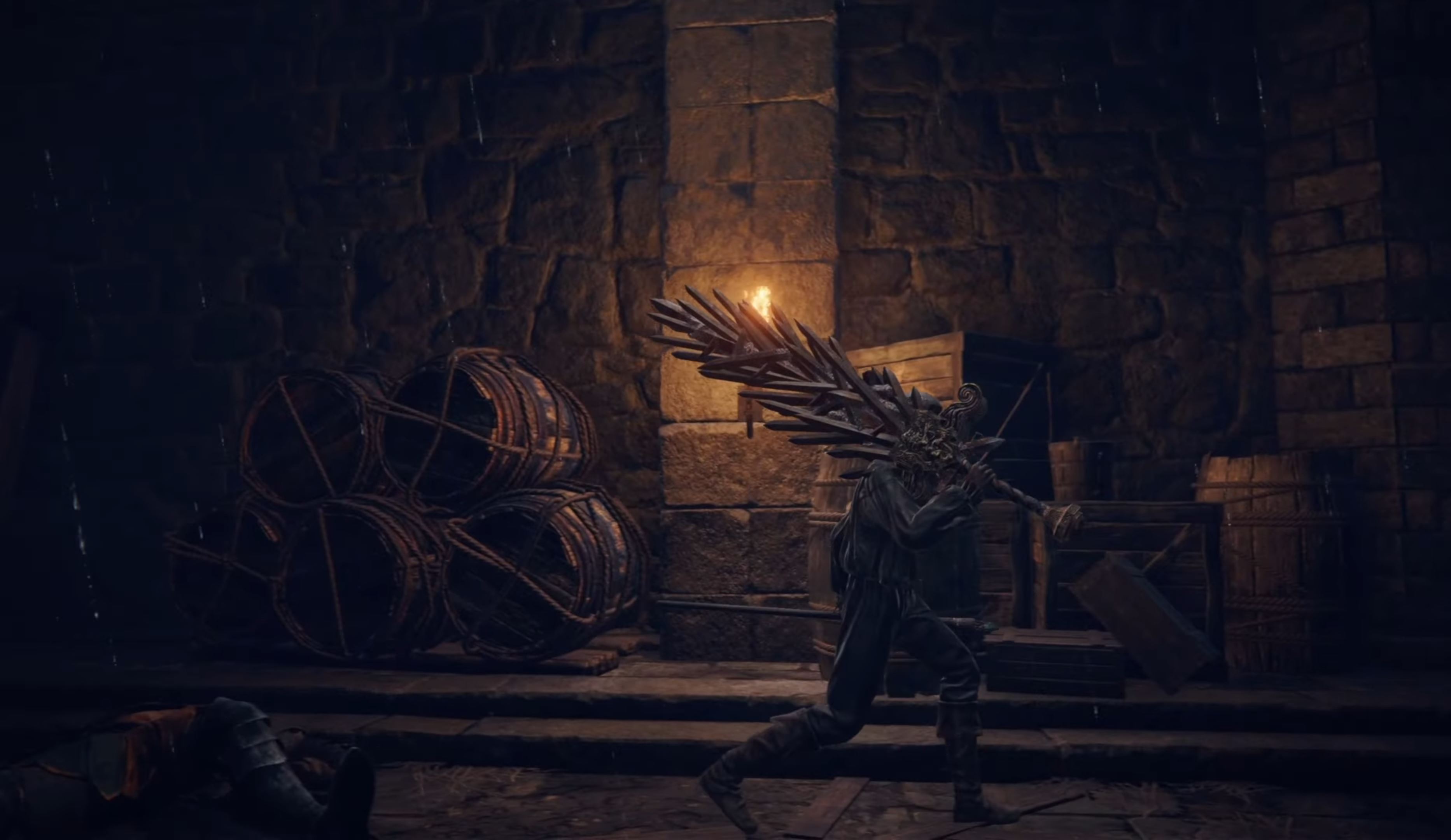 Elden Ring‘s recent 1.04 update includes quite a few notable buffs, nerfs, and changes, but the highlight of the update’s patch notes has to be the fact that the open-world RPG‘s various Colossal weapons are significantly better than they were before.

While Elden Ring‘s Colossal weapons were always big, visually impressive, and the preferred choice of Strength-based builds everywhere, their painfully slow attack speeds and dependence on a few key abilities made them a tough sell over so many other incredible options. Now that the attack speed, recovery time, block rate, and two-handed power of Colossal weapons have been buffed across the board, though, charging into battle with the biggest weapon you can find is suddenly a much more viable strategy.

That being the case, now seems like a pretty good time to reexamine the game’s roster of Colossal weapons and find the absolute best options for fans of comically large weapons everywhere.

This absolutely massive hammer boasts one of the better Colossal Weapon Skills in the game: Prelate’s Charge. That unique ability allows you to charge forward while setting the ground around you on fire. Because the charge attack lasts as long as your FP bar does, it proves to be a pretty effective way to deal with smaller groups of foes or even stagger some larger ones. It doesn’t hurt that the hammer itself hits like a truck.

You’ll find Prelate’s Inferno Crozier in Fort Laiedd near the Seethewater Terminus Site of Grace. It’s a guaranteed drop from a nearby flame-spewing monster who actually wields a version of this weapon.

While I didn’t think that Starscrouge Greatsword could possibly be better than it already was, Elden Ring’s 1.04 patch just made one of the best weapons in the game even more powerful. Thanks to that recent update, Starscrouge Greatsword’s dual-wield/two-hand attacks are noticeably stronger. That also means that it’s easier than ever to lure enemies in using the gravitational effect of this weapon’s incredible ability (Starcaller Cry) before finishing them off with a few quick strikes.

As always, you’ll need to defeat General Radahn and turn his Rememberance into Enia at Roundtable Hold in order to unlock this weapon. Given that Radahn was recently “buffed” following an accidental nerf, you’ll need to be at the top of your game to take him down and claim his swords.

Here we have another example of the rich getting richer. Maliketh’s Black Blade already boasted an incredible Weapon Skill that made it one of the more useful Colossal Swords in the game, and the recent universal buffs to Colossal weapons make Maliketh’s basic attacks more than just something you’ll use when you have to. This is a true late-game weapon, but it’s nearly irreplaceable for those Strength and Faith-based builds that got significantly better thanks to the recent update.

To unlock this amazing sword, you’ll need to defeat Maliketh and turn in the Remembrance of the Black Blade to Enia at Roundtable Hold.

There were already quite a few Elden Ring players who swore by Godslayer’s Greatsword, and it’s certainly easier than ever to recommend this special weapon thanks to the recent Colossal weapon buffs. You’ll need a decent amount of Strength, Dexterity, and Faith to properly wield this sword (20,22, and 20, respectively), but its incredible Weapon Skill (The Queen’s Black Flame) can absolutely melt through even the toughest foes. Its base attack is also shockingly fast for a weapon of its type.

To find this weapon, you’ll need to head to the Divine Tower of Caelid. There, you’ll fight the Godskin Apostle boss. While the boss doesn’t drop this sword, you will be able to loot it from a nearby chest after you defeat him.

The Fallingstar Beat Jaw was one of those Colossal weapons that were always floating near the edge of usefulness but could typically be replaced with slightly better options. Now, though, it’s easier than ever to appreciate the versatility of Fallingstar’s Gravity Bolt Weapon Skill (which basically allows you to summon a series of lightning strikes that crash down upon nearby enemies). This is the rare Colossal Weapon that performs about as well in PvP as it does PvE.

You’ll earn this weapon after beating the Full-Grown Fallingstar Beast atop Mt. Gelmir. That boss is no joke, but the reward for winning is now worth the effort.

Greatsword (AKA the “Guts Greatsword”)

This sword probably seems pretty basic, but that’s honestly part of the reason it’s so good. This is one of the few Colossal weapons worth using that can be upgraded with Ashes of War, which grants this sword an incredible level of versatility you don’t typically get out of that weapon class. Its basic attacks are also significantly faster than before, which means that it’s easier than ever to use this thing’s quick strikes to mow down waves of lesser enemies.

The easiest place to grab a Greatsword is in Caelid near the Caelem Ruins Site of Grace. You’ll find it in the back of a nearby carriage that is being guarded by some dogs.

I don’t know if I’m ready to call the Ruins Greatsword the best Strength-based weapon in Elden Ring as some have already done, but it’s certainly a powerhouse. If you meet this weapon’s sizeable Strenght requirements (50 points), you’ll find that its jump and power attacks will just crush all but the toughest foes. Meanwhile, this sword’s Weapon Skill (Wave of Destruction) is capable of generating a gravitational wave that will ruin the day of anything that has the misfortune of getting in its way.

You can acquire the Ruins Greatsword by defeating the Misbegotten Warrior and Crucible Knight at Redmane Castle Plaza. The easiest way to access this fight is to head to that area before you unlock the battle against Radhan.

Giant Crusher’s fantastic name and absurd Strength requirement (60 points) have long made it kind of a meme weapon, but this thing is a joke no more. Anyone going for a pure Strength build will want to pick this weapon up at some point. It deals a ridiculous amount of raw damage, can be equipped with Ashes of War and is no longer as dependent on jump attacks as it was before. Seriously, it’s worth putting up with the early-game frustrations of a pure Strength build just to eventually watch this thing pancake most enemies in the game.

Finding the Giant Crusher can be a little awkward. Your best bet is to head to the Outer Wall Phantom Tree Site of Grace. Head south from there until you run out of room to roam. You should spot a nearby chest that contains this weapon.

The Grafted Blade is another one of those weapons that always looked really cool and was technically viable for those determined to use it, but it was just always outclassed by too many alternatives. Now, though, this Colossal Sword is about as powerful as it looks. It’s fast enough to ensure that you won’t be too dependent on jump and power attacks, and its stat-boosting Weapon Skill (Oath of Vengeance) is better than you might think. This is an amazing overall two-handed option that got significantly better thanks to targeted buffs in the recent 1.04 update.

The Grafted Blade can be acquired by defeating Leonine Misbegotten at Castle Morne. You’ll likely need to revisit this boss after leveling up several times and defeating a couple of non-optional bosses along the way.

While the Dragon Greatclaw’s less-than-great Weapon Skill (Endure) certainly hurts its viability compared to other Colossal weapons, this thing’s built-in lightning damage makes it a contender. Anything that is even remotely weak to lightning (which includes quite a few notable Elden Ring enemies) will have a tough time standing up against what this unique weapon can dish out.

You’ll acquire the Dragon Greatclaw by defeating the Draconic Tree Sentinel at Capital Outskirts. It’s not an easy fight, but you should be able to handle it by the time you get there.

House of the Dragon: Meet the New Princess Rhaenyra and Queen Alicent
Wrath of the Lich King Classic: How Long Does it Take to Reach Level 80?
MST3K Season 13 is Embracing the Chaos
Natalie Jongjaroenlarp guests on Z Nation Season 5 Episode 11 Review & After Show
Call of Duty Modern Warfare 2: Best Guns and Loadouts