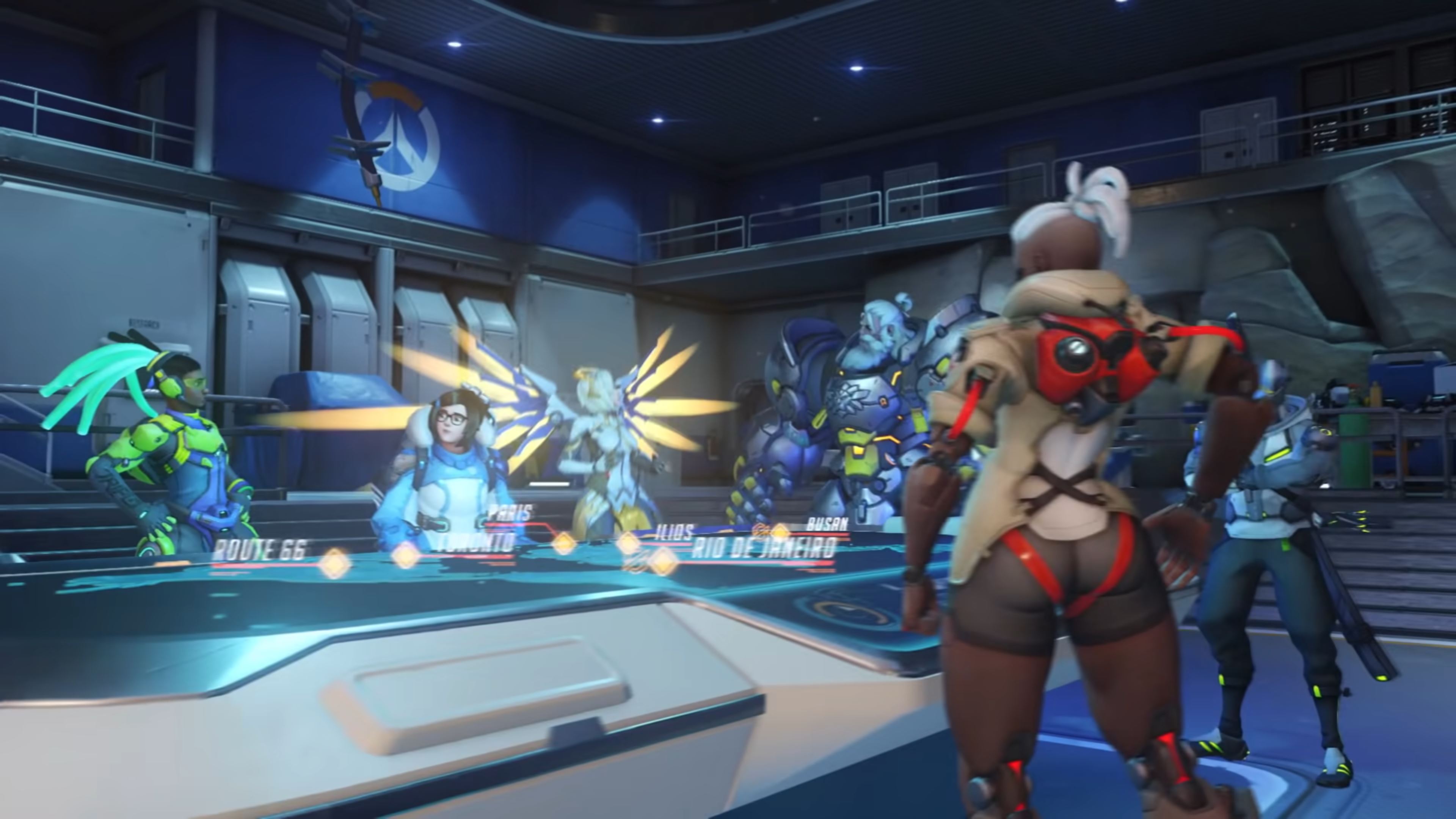 While the jury is still out on Overwatch 2, early previews of the game’s recent Closed Alpha have confirmed a number of Hero alterations that will likely change the way you look at your favorite (and least favorite) characters.

Even though Overwatch 2‘s new Hero characters have been stealing much of the attention so far, it’s really the various buffs, nerfs, and reworks to the game’s existing roster of Heroes that will likely have the biggest impact on the game in its earliest days. After all, Overwatch 2 is more of an expansion than a sequel, which means that a lot of fans are going to have to readjust their expectations regarding what the current members of the Overwatch roster are (and aren’t) capable of.

So while there’s going to be much more to say about Overwatch 2‘s Hero changes as the game progresses, here’s a rundown of all of the changes that have been discovered so far.

The first thing many long-time Overwatch fans will notice when they start Overwatch 2 is the fact that Doomfist (the longtime scourge of the DPS roster) is now a tank. It seems that the character’s long-awaited rework ended with him joining an entirely new class.

Here’s a visual breakdown of everything new about the tank version of Doomfist:

As you can see, Doomfist retains many of his key abilities but will no longer be able to deal as much damage with them as he did in the past. It seems that the goal is to make him a much more mobile tank comparable to Winston or Wrecking Ball. You’re still looking to jump into the fray as Doomfist in order to disrupt enemy teams, but you’ll no longer be able to do quite as much damage while you’re there (at least not as easily as before).

Doomfist’s new Power Block ability is undoubtedly the most fascinating part of his reworked kit. While that new shield isn’t big enough to protect the rest of your party, it will allow Doomfist to get closer to the fray and absorb some extra damage while charging up his Rocket Punch ability. That “absorb damage to increase your damage” idea has long been one of Zarya’s defining features, though it sounds like Doomfist’s version of that basic concept won’t be as versatile. It’s really just there to enhance the effectiveness of one of his key abilities rather than boost his universal damage output.

While Orisa has long been one of Overwatch’s most interesting shield tank options, her lack of mobility and limited offensive kit meant that she was kind of tricky to properly utilize outside of specific situations. Well, it seems that the Overwatch team is determined to make Orisa just a little more versatile than that.

Here’s a visual breakdown of everything new about Orisa in Overwatch 2:

As you can see, the biggest changes to Orisa involve the abilities she lost. Now that Orisa is no longer able to generate a protective barrier, you’re no longer going to be able to rely on her as one of Overwatch‘s few true shield tanks. That’s a big deal.

Orisa’s Energy Javelin is really the key to her new kit. It’s basically a lightning spear that can seriously ruin the day of anyone who gets hit by it. That ability (and the Javelin Spin ability that goes with it) allows Orisa to deal with close-range threats in ways that just weren’t available to her before.

As for Orisa’s new Ultimate, it’s basically a gravitational pull similar to Zarya’s Ultimate. The big differences between the two are that Orisa’s Terra Surge ability doesn’t “trap” enemies (they can move away from Orisa as quickly as they’re able to do so) and can deal direct damage. It’s kind of an odd change, but it complements Orisa’s reworked primary fire ability (which deals more damage the closer she is to her target).

Overall, it’s clear that Orisa was designed to be much more effective at closer ranges and a much more interesting “pushing the point” tank option. Players seem split so far regarding the overall effectiveness of her reimagined kit, but it’s certainly interesting

Bastion’s rework isn’t quite as dramatic as Orisa’s and Doomfist’s, but he’s certainly a different kind of character than he was before.

Here’s a visual breakdown of Bastion’s new and modified abilities:

The gist of these changes is that Bastion will no longer be limited to parking in a corner or sitting atop the payload. While he can still serve that purpose if need be, you might actually want to treat Bastion like he’s…well…pretty much any other Overwatch character. That’s basically another way to say that Bastion might actually be able to contribute to the team while running around the map.

In fact, some players have discovered that the new Bastion is surprisingly mobile. While it remains to be seen if he’ll find a home in the new game, he’s certainly a more appealing overall option than he was before.

Much like Bastion, Sombra hasn’t been completely reworked, but a series of little changes made to the Hero will also change how you use her.

Here’s a visual breakdown of Sombra’s new and modified abilities.

This seems to be yet another example of the Overwatch team trying to make a character built around “interrupts” a little less annoying than they were before. Unlike some of the other changes we’ve seen in that area, though, you could easily argue that Sombra isn’t strictly worse than she was before but will function slightly differently.

Indeed, Sombra actually seems to be just a bit closer to Tracer now in terms of her ability to bounce around the map and pick apart enemies. The changes to her Hack ability are significant, but Sombra’s various damage buffs and alterations should help soften the blow.

As previously rumored, Cassidy’s old Flashbang has been replaced with a Magnetic Grenade that is capable of sticking to enemies and dealing extra damage. It’s basically a nerf seemingly implemented to remove a stun attack from the game, and it’s already dividing Overwatch 2 players everywhere.

In a somewhat surprising move, Mei will no longer be able to freeze enemies using her primary fire ability in Overwatch 2. While Mei’s Ultimate ability will still freeze anyone caught in its radius, Mei’s primary fire attack will now simply slow down those affected by her icy blast. That will make her significantly less annoying, but it also makes her noticeably less effective.

The only major to Reinhardt’s kit is his newfound ability to hold two Fire Strikes on the same cooldown timer rather than one (which is certainly a nice little buff). It’s also far easier to control the direction of his Charge ability (and you can even cancel that Charge mid-maneuver if you’re so inclined to do so). Rein’s shield is stronger than before (its health has been raised from 1200 to 1600), while Reinhardt himself enjoys a slight buff to his overall health (300 points, up from 250 points) while suffering a slight nerf to his overall armor (200 points, down from 300 points).

There seems to be a little debate about this change, but it sounds like Junkrat’s trap has been reworked to allow you to move around slightly while you’re ensnared by it. While you won’t be able to move a significant distance, you may now be able to doge certain incoming attacks. This change makes a lot of sense given that Overwatch 2 seems to be reducing the number of stun effects in the game.

Winston’s new Tesla Cannon alt-fire ability allows him to shoot a charged blast toward enemy players. It’s a straight-shot ability you’ll need to hit with sniper-like precision, but it will finally give Winston a way to deal direct damage to enemies without having to get quite so close to them. Winston’s barrier is also stronger than it was before, and your allies can even see its remaining health.

In a surprising move, Zarya’s bubble abilities are now “connected.” That basically means you can either bubble yourself twice, bubble you and an ally, or bubble two allies. It seems like that change is supposed to make her a little more flexible, but some players are reporting that it’s now a little more awkward to manage her cooldowns and feel confident that you’re going to have access to either bubble when you need one most. This is definitely one change to keep an eye on.

Despite some persistent rumors, it seems that Lucio’s key abilities remain roughly the same as they ever were in Overwatch 2. However, it seems that allies affected by Lucio’s speed boost ability now produce a green glow around their feet.

D.Va’s pretty much the same as she was before, but her Defensive Matrix ability now lasts a little longer and recharges a little quicker than before. Furthermore, she’s now able to move about 20% faster while firing, and her cannon fire spread has been reduced by about .5% (according to the latest reports).

Ana still has access to her Sleep Dart ability, but its cooldown has been raised from 12 seconds to 15 seconds. Meanwhile, her Biotic Grenade ability will be slightly less effective than before (its healing/damage has been reduced from 100 to 60 according to player reports).

Well, the very good news is that Brigitte’s Shield Bash ability no longer stuns enemies (though it can seemingly still interrupt certain abilities). The bad news is that it now does more direct damage, boasts a longer range, enjoys a shorter cooldown, and can now go through shields. I haven’t seen exact damage figures yet, but it seems to be much more powerful as a direct attack overall.

Brigitte’s Inspire ability also does less overall healing now, though there seems to be a little debate about the exact figures.

Despite rumors that Blizzard intended to completely rework Mercy for Overwatch 2, it seems that she’s pretty much the same as she was before. However, it does appear that she now does less self-healing overall, and her healing staff appears to be slightly less effective than it was before.

The only notable change I’ve seen to Zendaya is the fact that it’s now much easier to see who is in range of their Ultimate ability. It’s a nice little QOL update.

Those are all the significant hero changes I’ve found so far, but let me know about any that you’ve discovered in the comments below!