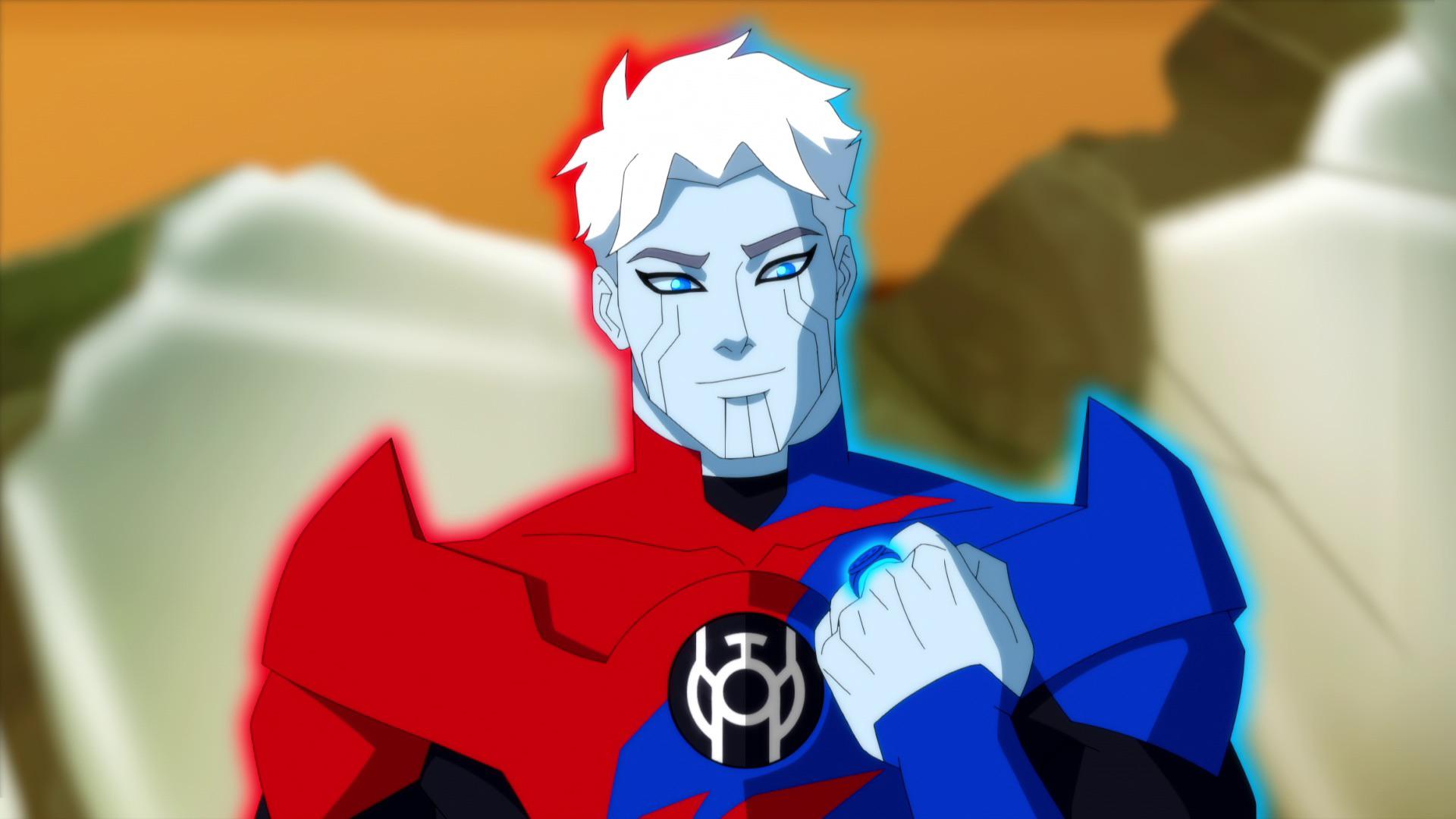 Who would have guessed that Young Justice: Phantoms would continue the story of another beloved, canceled-too-soon, decade old DC animated series? Nobody, and yet here we are, finally getting a follow up to Green Lantern: The Animated Series.

For those of you who don’t remember (and my god, why would you? The intervening decade has been a BIT MUCH), Green Lantern: The Animated Series followed Hal Jordan and Killowog as they traveled the galaxy on a ship operated by an AI named Aya. After averting a war with the Red Lantern Corps, Hal and Kilowog were joined by one of those Red Lanterns, Razer, who developed feelings for Aya and even worked with the Blue Lantern Corps on controlling his rage and developing hope.

At the end of the show, Aya, who had merged with the corpse of the Anti-Monitor, was ready to rewrite all of reality by traveling to the dawn of time and changing the Big Bang to exclude all organic life. Aya returned to herself after zapping Razer and realizing who she really was. However, she had left copies of her evil mind in an army of Manhunters, and needed to feed them all a computer virus to shut them down and prevent the whole Big Bang thing from happening again. Aya sacrificed herself to save the universe, and at the very end of the first (and only) season of the show, Razer, convinced she was still alive out there somewhere, headed off into the cosmos to find her.

Cut to 10 years later. Kilowog and Tomar Re are heading to New Genesis for a summit with the New Gods, Rocket, and Jay Garrick about an alliance to fight Darkseid’s game playing on Earth. The Lanterns respond to a distress call from elsewhere in that solar system and find…Razer. In a Blue Lantern outfit. About to die, because his ring, powered by hope, isn’t working anymore because he’s all out.

From there, the show more or less completely integrates Razer’s story from Green Lantern: The Animated Series into Young Justice continuity. He never finished his quest (even whispering Aya’s name at the very end of the episode), but he did give up his Red Lantern ring when the Blue ring found him. He felt that his rage was complicating his search, so he handed the red ring to Metron, jerkiest of the New Gods, for safekeeping. Metron spent four years studying the red ring and goading Razer into losing hope, so he could swap out the rings and study the blue one. As was the case last week, the classic New Gods lore here is great, as Metron is a giant asswipe in both the original Kirby comics and this episode.

Razer and Metron’s encounter culminates in a big flying fight through Supertown. Girl Forager gets inadvertently hurt, powering Razer’s fury even more, but he also manages to rip the blue ring out of Metron’s containment field and wear both rings at the same time, reworking his red costume into a slashy, blue-red mix that looks like Lantern Corps Zubaz, something I said at first as a joke but now really want in my life.

The subtle fun of this episode is the slow realization first that they kept the same voice actors as the GL show, and then that they used those same voices because they were already working on Young Justice. Jason Spisak is two characters in the same episode – Boy Forager and the returning Razer – and Kevin Michael Richardson picks up where he left off a decade ago with Kilowog after spending a good chunk of the first half of the season as Nabu. Josh Keaton and Grey Griffin (Hal Jordan and Aya, respectively) aren’t in this week’s episode, but both are regulars on this show as Black Spider, Helga Jeice, and others.

This was a busy episode, another extremely strong entry buoying Young Justice: Phantoms since its return.

15 Best SNES Fighting Games Ever
Quantum Leap Showrunner Has a Secret Plan for Original Star’s Return
Deadpool 3: The Problem with Bringing Back Hugh Jackman’s Wolverine
The Legend of Zelda: Who Created the Triforce?
13 MCU Theories That Were Too Good to Be True