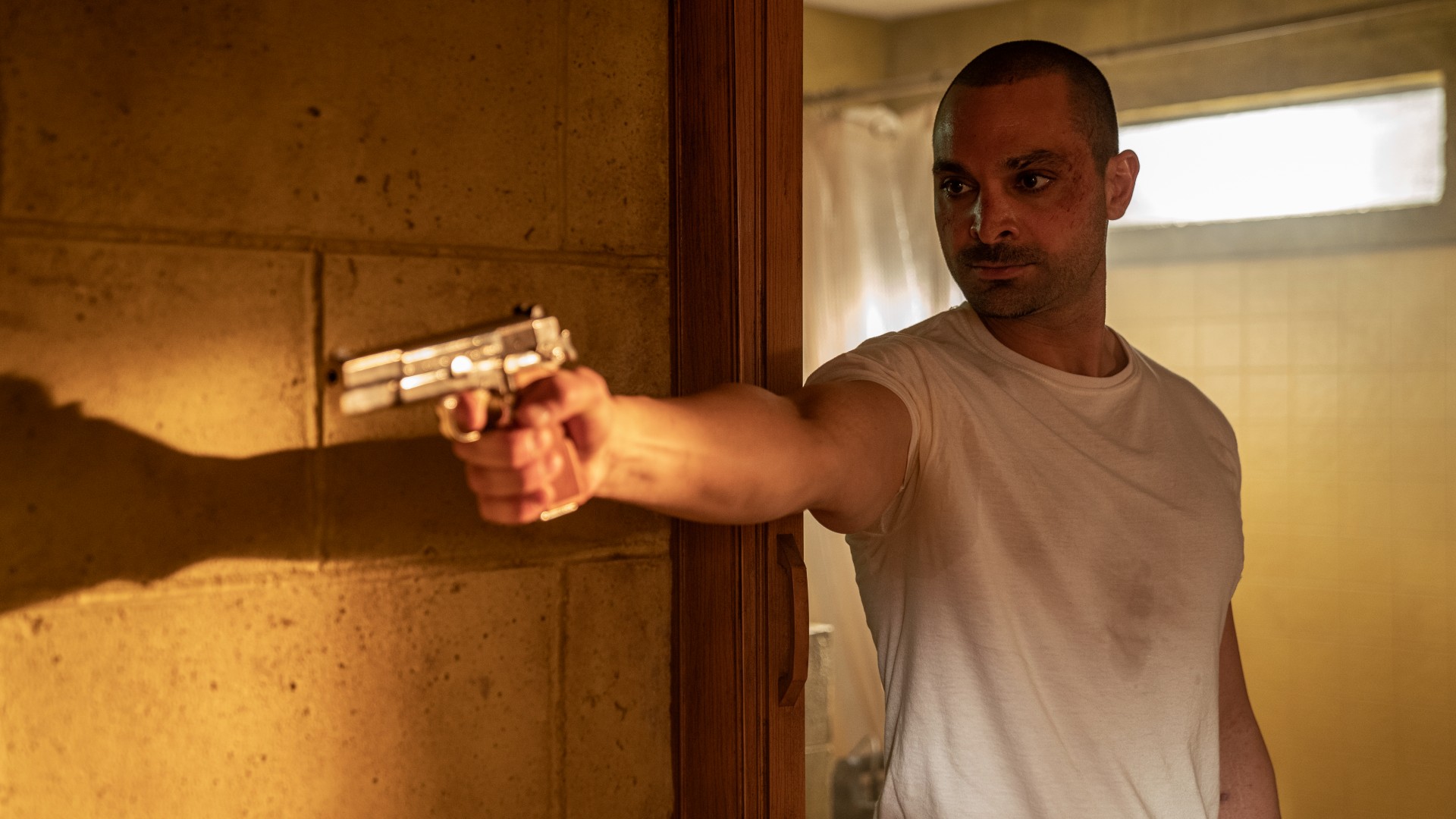 NO, REALLY. PAY ATTENTION TO THE BIG YELLOW SPOILER ALERT ABOVE YOU! I’ll even add a couple of blank paragraphs just to be safe. Those who have not yet seen Better Call Saul season 6 episode 3 have been duly warned!

Nacho Varga (Michael Mando) is one of Better Call Saul’s most consummate survivors. And that’s why he had to die.

That’s right. As those who watched Better Call Saul season 6 episode 3 “Rock and Hard Place”, or merely those who ignore big yellow spoiler warnings, now know – Nacho is the first major casualty of the show’s final season…and inarguably its biggest character death since Chuck McGill at the end of season 3. Framed by Gus Fring for the attempt on Lalo Salamanca’s life, Nacho was truly between the rock and hard place of the episode’s title. His only options were to accept the relatively merciful death at the hands of Gus’s people or the decidedly less merciful death that the Salamancas had to provide. Ultimately he chose the same path that a certain chemistry teacher will eventually take in a few years, dying from a bullet he himself fired.

Reading this in the wake of Nacho’s death, it may seem ironic or cruel to call him a consummate survivor. But that’s what he was in all sincerity. Through six seasons of Better Call Saul, Nacho was consistently crafty, resourceful, intelligent, discerning, and even athletic. Seemingly every new season provided a new opportunity for the show to execute Nacho (one of the few main characters it actually could kill since so many other characters fates’ were wrapped up in Breaking Bad), and yet every season he somehow got through until now.

Look at what Nacho does to survive just within the first few episodes of season 6 alone. He runs through the harsh Mexican desert for hours on end, with no chance of rest. Then he’s guided to a seedy, non-air conditioned motel in the middle of nowhere by Gus’s people. Gus has every intention of this motel functioning as Nacho’s tomb but Nacho uses his intellect to sniff out the treachery and takes out a would-be assassin. Then, as the Salamanca twins and all of their soldiers arrive, Nacho hot wires a truck and drives it through a hail of bullets to relative safety once again. If all that weren’t enough, however, the Salamancas catch up to Nacho’s damaged ride in the beginning of “Rock and Hard Place.” Thinking absurdly quickly, Nacho opts to hide, not run. He crawls into an abandoned oil tanker in the field off the dirt road, and even submerges himself under the inky black sludge when one of the twins comes looking.

Nacho is the latest and most profound example of what Breaking Bad and Better Call Saul do better than almost any other storytelling venture. These shows present believable characters who unquestionably embody Darwin’s “survival of the fittest” ethos and then it kills them anyway. Because even all the ability, intellect, and experience in the world can’t make up for any given character’s original sin.

Walter White’s original sin is pride. In the Breaking Bad series finale, he says it himself: he did all of this for him…because it felt good. Pursuing that sense of self superiority leads him only to ruin. He dies with his family loathing him, his empire in ashes, and the cancer he thought he could outrun coursing through his body. Gus’s mercy cannot prevail over his wrath. He lets Hector Salamanca live to emotionally torture him and Hector eventually kills him with an assist from Walt. Mike Ehrmantraut gets greedy. Gus’s death would be the perfect time to get out of the game but Walt’s meth was so pure and his granddaughter had so many future bills on the horizon. Mike dies alone watching the sunset.

What was Nacho’s original sin? Unlike the other karmic ghosts of the Breaking Bad universe, it’s not one of the seven deadly ones. In reality, his sin was simple complicity. Nacho has been a part of the criminal underworld on Better Call Saul ever since the series second episode. First introduced as a lieutenant to Tuco, Nacho then is elevated to Hector Salamanca’s right hand when Tuco is carted off to prison.

During his time with Hector, Nacho began to have second thoughts about his life in the cartel. After Hector expresses a desire to turn Nacho’s father’s store into a laundering operation, Nacho betrays him and poisons his medication with an assist from Mike. It’s ultimately this act of familial loyalty that dooms Nacho. Since Gus knows what Nacho did, he blackmails him into being a double-agent against the Salamancas. That sets him down a path that eventually concludes with his involvement in Lalo’s assassination attempt becoming known and his death becoming inevitable.

Nacho was a “good” cartel member. He had love for his family, was gentle with the people in his life, and abhorred violence. As early as the show’s second season, Nacho clearly wanted out of the life that he had chosen for himself. The problem was that he already chose it. His father would routinely beg him to go to the police, confess, and leave this whole life behind. But obviously Nacho could do no such thing. There is no cell or safe house on Earth that could keep him from the Salamancas vengeance forever. Nacho’s fate was sealed before the first moments of Better Call Saul season 1 even began. What’s remarkable is how the show eventually gets around to it…three episodes into the final season nearly a dozen before the show’s ultimate end.

This is another example of the Breaking Bad universe’s improvisational writing style paying dividends. Better Call Saul likely always had plans to kill Nacho Varga. His absence from the plot in Breaking Bad was unavoidable. Writing this before the release of episode 3 and not having spoken with Peter Gould or the show’s writers, I would venture a guess that the timing of when death came calling for Nacho surprised even them. But now was indeed the time.

All the major characters on Breaking Bad and now Better Call Saul solve problems over and over again. Walter White is presented with a problem, like say the DEA tracking down his cooking camper in an impound lot, and he solves it. Jimmy McGill is presented with a problem, like say Howard Hamlin not settling the Sandpiper lawsuit quickly enough, and he solves it. There comes a time for each character where fate forces their hand and the problems can no longer be solved. The math quite simply does not add up.

That’s what makes the circumstances of Nacho’s demise so tragic, yet dramatically satisfying. He did it all right. He trudged through dirt, mud, blood, and oil. And yet the math finally started to work against him. Luck ran out. There is no world in which Nacho can survive both Gus Fring and the Salamanca family wanting him dead. Rather than insulting the audience’s intelligence and insisting otherwise, Better Call Saul has Nacho accept his fate.

As another TV titan, Captain Jean-Luc Picard, once said “it is possible to commit no mistakes and still lose. That is not a weakness. That is life.” Sometimes the difference between good television and great television is whether or not it understands that maxim.

Marvel’s Avengers Superior Seminar | Hulk
The Legend of Zelda: Who Created the Triforce?
13 MCU Theories That Were Too Good to Be True
MST3K Season 13 is Embracing the Chaos
Sci-Fi Short Film “Golden Shot” | DUST