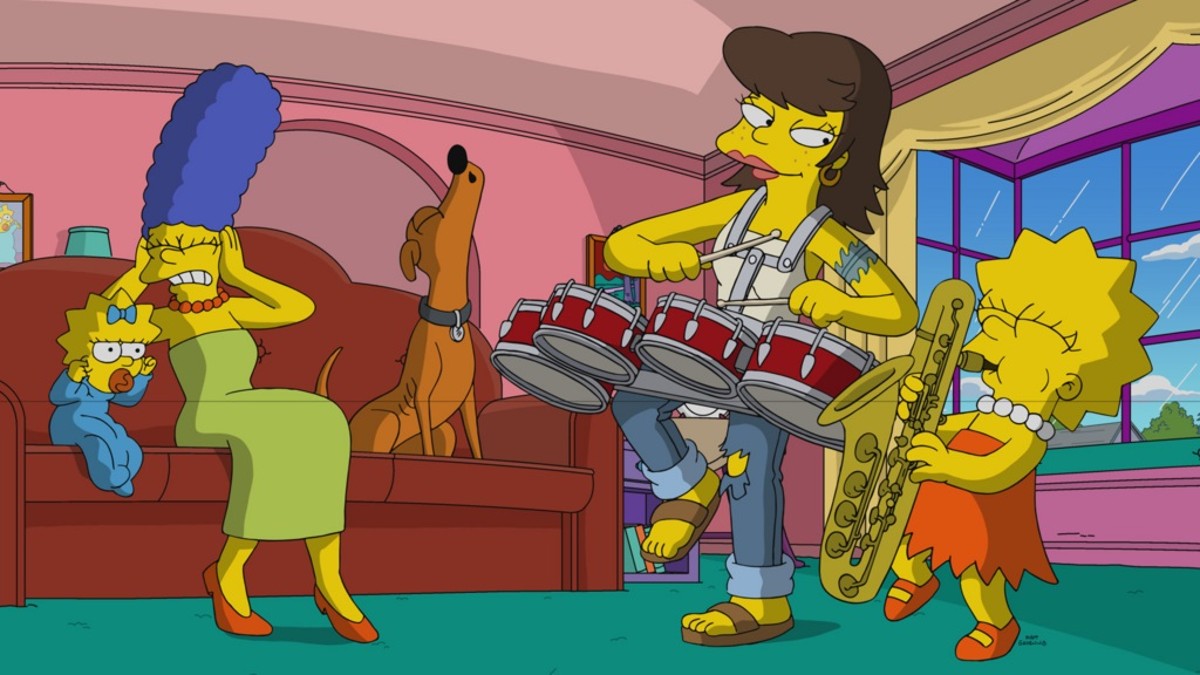 This The Simpsons review contains spoilers.

Lisa gets bumped up from first chair saxophone to high school second banana, and still is the smartest little girl in grade number two. The Simpsons’ “Girls Just Shauna Have Fun” is sweet, surprisingly sobering, and keeps its wit about.

The episode opens when a double-time toe-crushing marching incident leads Springfield Elementary’s most talented musician, Lisa, to sit in with Springfield’s high school marching band. Lisa’s expectations are set high early. She believes high school musicians are the coolest people in the world, that they actually care about music theory and tradition. In her internal musical world, Lisa is the ultimate optimist, and experiences life through filed reeds.

Shauna is the reluctant daughter of Springfield Elementary Superintendent Gary Chalmers (Hank Azaria), whose subplot involves making craft beer with Homer. Voiced by Tress MacNeille, who has been on every episode since 1990, Shauna is one of the better secondary characters on The Simpsons. Her throwaway delivery spices every sarcastic line. Some of the connections are inspired jumps of logic. When her father says he spent all afternoon hand-rolling gnocchi, she says she hates people touching her food.

Lisa is right to think their secret meaning of the word “losers” is anyone who isn’t Shauna or Lisa is cute. Shanna reveals things in shortcuts.The character is only shallow for show. Even the band she forms at the end, Brenda and the B-Words, is a clever punchline which connects subtle dots.

Lisa’s relationship with Shauna has a completely effective arc. One goes from embarrassed to inspired, the other gets deserted at a teenaged pizza party, after hours, when all the slices are gone and the beer comes out. Lisa truly captures the loneliness, betrayal and fear of a kid in a place she knows she shouldn’t be.

Marge is the designated annoyed parent role. The immersion into horror romance could have been mined for more than a closing credit punchline. At least Bart gets to bask in delicious awkwardness. Maggie’s jealousy should have been given a bit more time to grow before it is left festering unattended. Bart has a point when he points out Lisa “made a very fussy enemy,” but it registers as an afterthought.

Homer and Chalmers get less time but produce a high yield. It is interesting to watch Chalmers as more than a sidekick to Principal Skinner, even if it means having a fake profile saying he is a Goth from Argentina named Rodrigo. He deepens his character by having to say he’d be the Lorelei on Gilmore Girls. The two relationships mirror each other in subtle ways. Homer learns beer has ingredients, Lisa learns the satisfaction of a fun older friend who is mean for no reason. Homer and Chalmers, together, learn to burp in harmony.

The Trappist Monk Beer portion is well aged with special Simpsons flavors. The montage of drunken monks is visually engaging, and grin inducing. We know Homer has been waiting to be asked the question “Do you like beer?” since before he popped his first tab. But it does make more sense that he’s never actually thought about it.

Beer serves another purpose in Homer’s life than enjoyment. It is a means and an end. He’s been walking the Trappist Monk path all his life. Their responses to the final “epic party” challenge define the characters. Chalmers can’t bear the professional weight of inebriating minors, and Homer needs to save his precious home brew from those awful teens.

It’s a crime that the bit about the stolen beer is all fizz. If there is one thing The Simpsons taught us, besides alcohol being the cause of and solution to all our problems, it’s that non-alcoholic beer is a non-starter. The Wiggum oration is heavy handed, and works best as irony. While the line about subjecting the kids “to the best night of their lives” works as patented Simpsons irony, none of those kids wants to see what the sobriety leads to.

“Girls Just Shauna Have Fun” is a fun episode, loaded with emotional bits, one liners, and visual gags, like Mouth Mistake Hot Sauce. It is an original plot, which moves naturally, with effective overall character development. It also lets Shauna get off without a warning.