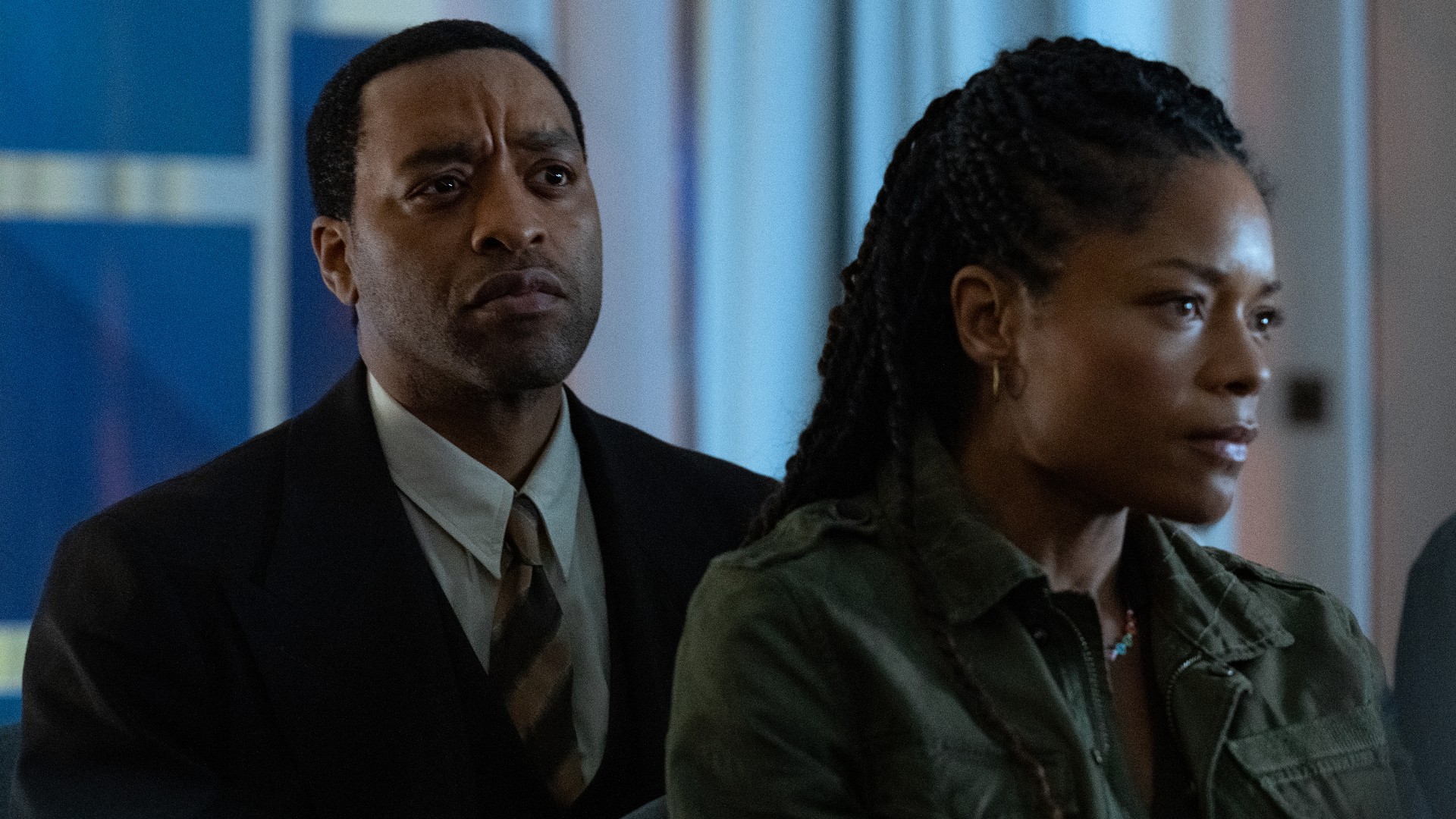 Ground control to Alex Kurtzman and Jenny Lumet: the stars are aligned, but look very different today. The Man Who Fell to Earth is a standalone sequel series, using Nicholas Roeg’s 1976 film as an alternative energy source. With Walter Tevis’ 1963 science fiction novel The Man Who Fell to Earth as a launching pad, the film starred David Bowie as Thomas Jerome Newton, an overstay from a galaxy not that far away. Showtime’s new series stars Chiwetel Ejiofor as K. Faraday. He is an immigrant from that same planet, Anthea.

The fusion between the two projects is clear from the opening mission statement. Newton came to “the planet of water,” because his home planet is burning dry. Earth has the resources he needs to save it, but terrestrial forces get in the way. The new series takes place half a century after Newton built a corporate conglomerate with the wealth to build a rocket to send him back to Anthea. He was ultimately distracted. His overheated planet is now a final warning to this simmering space ball. His successor arrives as the last hope of a planet Newton barely remembers.

“I am an immigrant, a refugee. To survive, I had to be reborn,” Faraday says as he introduces himself to an audience of great scientific minds. It will turn out to be an understatement. Ejiofor brings tenderness into the role, but also a great deal of humor. Faraday learns the English language as he goes, and Farsi in a cab. Like most immigrants, the first word he retains is a curse. He learns this from the police officer K. Faraday (Martha Plimpton), from whose badge he adopts his name. It becomes a running gag. In one very funny scene, he pays it forward to a parrot, teaching it to say “Fuck it.”

In the film, the wittiest lines come from secondary characters. “My father used to say ‘Oliver, when you get a gift horse, walk up to it, pat it, quiet the animal down and then, using both hands, force open its jaws and have a damn good look in its mouth,’” Newton’s lawyer Oliver Farnsworth (Buck Henry) tells his lover, who believes it is sound advice. “My father was always wrong,” Farnsworth bemoans.

The series has quite a few characters which are not in the film at all. Justin Falls (Naomie Harris) is a former M.I.T. marvel, who failed at cold fusion and now does toxic clean-up work as her own personal penance. She has a daughter, Molly (Annelle Olaleye), and a sick father Josiah (Clarke Peters), also a former science genius, but 26% less intelligent than his daughter, quantifiably.

Sonya Cassidy plays Edie Flood, and Rob Delaney plays her brother Hatch. They are the heirs to the company Newton built, World Enterprises Corporation, and his patents, the last of which is hidden in sealed documents. There is no specific Flood family in the movie. It is conceivable they are stand-ins for the family of scientist Nathan Bryce (Rip Torn), who could have conceived a number of children in the original movie.

Jimmi Simpson plays Spencer Clay, a CIA operative who has his own history with aliens. “On my watch 1,502 rapists, criminals and parasites were deported out of this country,” he recounts at one point. He is the series’ most versatile villain, fine with the legalities and the ethics of screwing up a Ukrainian family off camera, and crushing butterflies and birthing calves while it is rolling. His handler, Drew, is played by Kate Mulgrew. The book and film both had CIA and FBI infiltration. Some overt, others less so. Who is the watcher observing Newton’s arrival in the film? Is he connected with a giant corporation, the government? RCA Records?

The series opens with a flash-forward. Faraday is presenting the biggest evolution in scientific invention to a crowded theater. He could be described as a more human Elon Musk, if he wasn’t “The Man Who Fell to Earth,” or a tyrannical Jeff Bezos type, planning his earthly escape aboard the Blue Origin. This is disappointing because it tells the audience he is going to overcome whatever is thrown at him. This sucks the suspense from the upcoming events.

When Bowie’s Thomas Jerome Newton lands the audience doesn’t know how alien he is. As he moves through our planet, expectation forces our mind to alienate him. He otherwise blends into humanity, speaking the language in the Queen’s English, and reluctantly selling a gold wedding ring at an antique store for slightly less than what it is worth. Only when it is revealed he has a string of rings does the audience understand it is just a way to trade with the natives.

When Faraday crashes, he lacks basic communication skills, does not have a wardrobe, sticks a garden hose impossibly far down his throat, and gets Tased, arrested, and has to demand gold standard in a pawn shop. Faraday doesn’t care at all about presenting himself in a way in which the people of earth can be comfortable. He’s got a mission to complete, and niceties are not in the equation. His species is nearly extinct.

Ejiofor’s approach doesn’t mirror Bowie’s at all. It is an inspired contrast. Because we’ve seen who he becomes, he never actually appears frail. The audience never quite fears something will forever damage him, until he comes to understand emotional agony in a human sense. Newton was practically dissected alive, and the naturalness of Roeg’s simple cameras make it agonizingly real. Contemporary special effects are so improved, pain has become surreal. In the film, Newton is revealed to have a sexless body, at least as far as human anatomy goes. When Faraday enters a hotel room naked at one point in the series, Hatch commends him on his penis.

Bill Nighy plays an older version of Thomas Newton in the series. This contradicts the movie. In the final scene of the film, Bryce tracks down Newton through a musical album the reclusive extraterrestrial released under the stage name The Visitor. Everyone around Newton has aged, but he is the same youthful, rusty haired alien he was at the beginning of the film.

In Roeg’s film, overlapping frames and disjointed scenes make it appear there is more to Newton than meets the eye. He picks up radio signals, chatter, and static, we don’t know if he is telepathic. “Get out of my mind,” he yells at TV screens. The series makes it clear that Faraday has overactive senses. He hears faraway conversations, smells fear, and tastes loneliness. Newton learned everything he knows about Earth from television, which shows images but doesn’t say anything.

The biggest difference between the series and the film is approach. The series is straightforward storytelling, while Roeg’s film is a work of expressionism, and peripherally myopic. The Man Who Fell to Earth is unlike any other science fiction movie. Roeg experimented with narrative in most of his films. Time is fluid and unpredictable. It moves disjointedly. Director Roeg gets as distracted by human dalliances as alien Newton. The movie is filled with digressions, gaps of logic and continuity, and extreme tone changes.

The series is a more conventional science-fiction adventure, with clearly delineated good and evil players. It is a purposeful adaptation of the characters in Tevis’ novel, set in today’s world. This is part of the evolution Faraday promises, in some ways. When Bowie’s ethereal extraterrestrial first crash-lands in a lake in Kentucky, he is a stranger in a strange land, new and still adjusting his eyes. When Ejiofor’s interstellar immigrant spirals into the New Mexican desert, he is following the first emissary. In the interim, earthlings achieved eye-opening technological proficiency on a global scale. We all got wired, as well as becoming familiar with alien presence through Star Wars, Close Encounters of the Third Kind, Alien Nation, and The X-Files.

Kurtzman directed the first four episodes made available to the press, and wisely assumes the TV audience’s comfort with aliens living among us. Mork, from Ork, sat on his own face in our living rooms, and for every cautionary tale like Roswell there are warm affirmations of life to be found on Third Rock from the Sun, no matter how big your head is.

The series plays with the impressionistic ambiance of the film in subtle and mischievous ways. Kurtzman clashes tones, and mixes bizarre cosmic visual swells with in-the-moment foreshadowing. He mimics the film with real-time, handheld camera sequences, as well as cinematographer Tony Richmond’s panoramic framing. But it never gets weird enough to scare the uninitiated, and still takes the time for a twisted “I don’t think we’re in Kansas, anymore” scene.

The Power of the Space Oddity

In Tevis’ novel, Thomas Jerome Newton is unmistakably alien. He is 6-feet, 9-inches tall, “improbably slight, his features delicate, his fingers long, thin, and the skin almost translucent, hairless. There was an elfin quality to his face, a fine boyish look to the wide, intelligent eyes.” He sounds like Ziggy Stardust in 12-inch platform fuck-me pumps. Bowie’s alien is an outsider, but played internally and with the weight of his stage persona to fill in the blanks.

The Man Who Fell to Earth was the first leading-man role in a major motion picture for Bowie, who studied theater under Lindsay Kemp, who also taught Kate Bush. Roeg knew how to translate a musician’s sonic identity onto celluloid. He got an amazing performance from Mick Jagger in the film Performance, and went on to make Track 29 for former Beatle George Harrison’s HandMade Films in 1988.

Man Who Fell to Earth capitalizes on who Bowie was and represented. The movie did it contemporarily, the series mines his legacy. During the film’s making, Bowie was in as transitional an artistic phase as Newton is galactically. Roeg let the singer choose his own wardrobe, hairstyle and colors. The series uses Bowie song names as episode titles. When Bryce goes to a record store in the movie, Bowie’s Young Americans is on display. The series dialogue is filled with lyrical reminders, such as quoting the song “Space Oddity” conversationally.

The film’s tweezer-in-the-eye scene is a harsh reference to the experimental silent film Andalusian Dog, which Bowie projected during tours. There is a long-held misconception that Bowie’s eyes are each a different color, but it is only an illusion caused by a permanently diluted pupil. In the film, the FBI or the CIA solder Newton’s contact lenses to his eyes so that he can never prove he is an alien.

Showtime’s The Man Who Fell to Earth is a parable on the climate crisis, race relations, immigration, evolution and extinction. It is a standalone sequel to the film and novel, but it follows the same plot. Both Tevis’ novel and Roeg’s film end in failure. It feels like Newton does everything he set out to do. But it was never going to happen. He is doomed from the start.

Though he didn’t mention the hotel by name in the original 1963 printing of the book, Tevis, who also wrote The Queen’s Gambit and The Hustler, predicted the Watergate break-in, and CIA involvement in Republican politics. He was off by four years. The Man Who Fell to Earth sequel series promises to finish what Newton started, and gives earth less than a decade to do the same.

The Man Who Fell to Earth airs Sundays at 10 p.m. on Showtime.