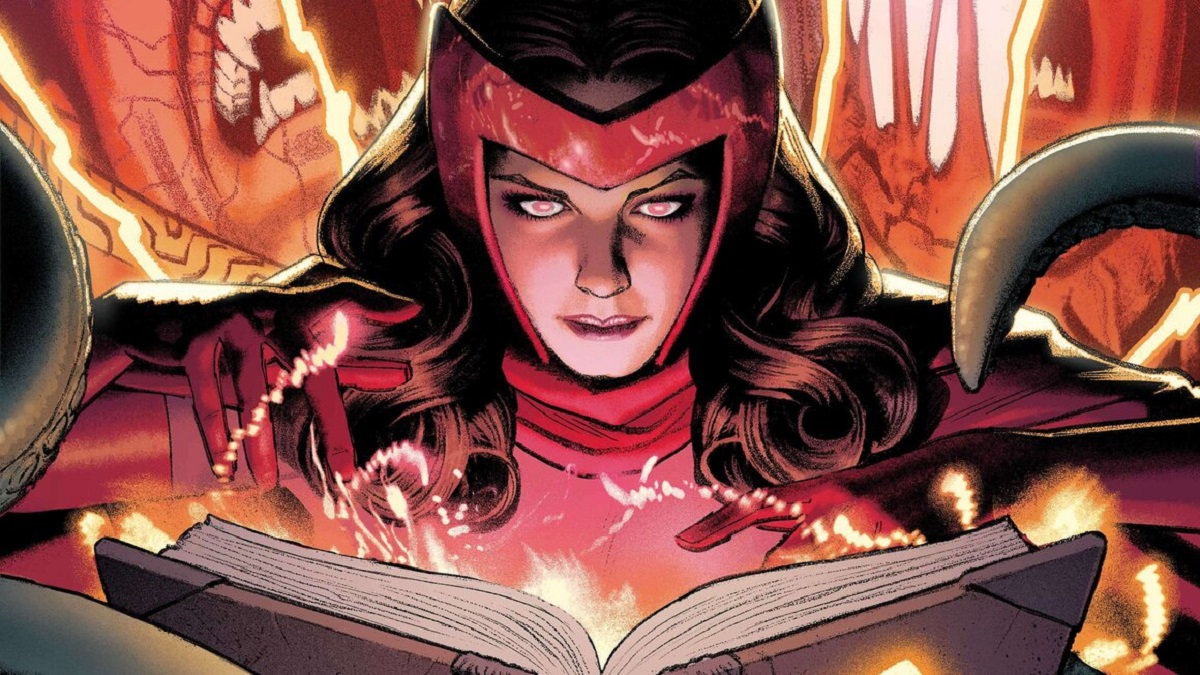 This article contains Doctor Strange in the Multiverse of Madness spoilers.

Doctor Strange in the Multiverse of Madness is the latest MCU entry and a lot of people have been checking it out, starting its first weekend off with $450 million internationally. While much of it feels inspired from Sam Raimi’s other work, it is a comic book movie featuring a lot of different elements. When you leave the theater, you or one of your friends might be interested in checking out the comics that inspired this movie.

Even when a Marvel Cinematic Universe project is based on an existing story, it’s only loosely so. Captain America: Civil War, Avengers: Infinity War, and Hawkeye are probably the most faithful to the source material (Civil War, Infinity Gauntlet, and Matt Fraction’s Hawkeye run respectively), but they only connect in the broadest of strokes.

Doctor Strange’s newest adventure has a lot of moving parts that are taken from the comics: the Scarlet Witch’s mental imbalance, the wrath of the Darkhold, the follies of the Illuminati, the journey of America Chavez, and so on. It’s a comic book cocktail.

So here are some comics you can look at to keep riding that Doctor Strange in the Multiverse of Madness wave. And that’s without even factoring in the strong influence of the most famous X-Men story of all, The Dark Phoenix Saga, in to the equation, which definitely has echoes of Wanda’s fall from grace in this film.

Rise of the Darkhold

Like Moon Knight, the Darkhold was introduced in a story about Werewolf by Night. While a powerful maguffin, the Darkhold has rarely been interesting enough to carry its own story. Instead, it has been instrumental in various minor Marvel stories involving the likes of Strange, the Avengers, and Thor.

Instead of getting the Infinity Gauntlet treatment where there’s a huge event surrounding its threat, the Darkhold instead has a single volume that collects various classic stories that tie into its existence. From the wizard Mordred using it to corrupt the Scarlet Witch to Doctor Strange fighting Dracula, these tales go all over the place.

While not the first time Wanda let the darker elements of her personality take hold, this West Coast Avengers story is perhaps the most infamous. As we’ve seen elsewhere, this was the first instance where Wanda was faced with the reality that her children weren’t real, and thus proceeded to make life a living hell for everyone around her. This is a particularly icky version of the story, though, so feel free to skip this one.

The 2004 story Avengers Disassembled by Brian Michael Bendis and David Finch kicked off the lengthy string of major events overtaking the Marvel Universe when Bendis was writing various Avengers comics as the backbone of the company. This story told the tale of how the classic iteration of the Avengers came to an end, due to a shattered team and wounded reputation.

What threat is the team up against? I’m not even sure where to start! Over the course of hours, the Avengers appear to be hounded from unexplained, overwhelming, and even random situations. Sudden Kree invasions, Ultron attacks, She-Hulk losing her mind and going on a violent rampage, Tony Stark going on a drunken rant at the United Nations despite years of sobriety, and so on.

Who could be behind such a thing? Doctor Strange shows up to tell everyone and considering the basis of the article, it should not be hard to figure out who the big villain is. It’s not the most climactic Marvel event, but it definitely feels like the story that fits in with Multiverse of Madness’ narrative the best.

While she has her moments of lucidity, the Scarlet Witch is gradually losing control of her mind. Doctor Strange and Charles Xavier do their best, but it looks to be a fool’s errand. Wanda’s brother Pietro becomes afraid that one of the Avengers or X-Men will come to kill her for the sake of protecting the fabric of reality. He convinces her to transform the world completely.

In this new reality, mutants rule over humans and Magneto’s House of M is supreme. Wanda is happy, not because of being royalty, but because she can be with her sons. All the superheroes are placed in their dream situations to keep them complacent and prevent them from interfering. The problem is that Wolverine’s dream is to have all of his memories, meaning that from the beginning, he knows that everything is wrong.

Although it was introduced in the pages of Bendis’ New Avengers, the Illuminati eventually got their own miniseries, showing the history of the secret hero team and the shockwaves created from them trying to change the world for the better. Doctor Strange, Charles Xavier, Iron Man, Namor, Reed Richards, and Black Bolt meet up throughout the years to assess threats to the planet and try to network their way towards peace.

There’s also a pair of cameos by Scarlet Witch and Clea that are…very eye-opening when it comes to Strange. I’ll leave it at that.

While it’s not part of the Illuminati trade, it’s worth tracking down the issue Road to Civil War – New Avengers: The Illuminati. This one-shot shows the origins of the team, including how and why Black Panther refused to be a part of it all. It also shows the team falling to pieces between the decision to send Hulk into space and the coming of the Civil War.

The run of Young Avengers by Kieron Gillen and Jamie McKelvie is the perfect place to go if you’re jonesing for some America Chavez. Sure, she has her own comics, but this one fits with the movie’s plot while giving us an idea of what some of the younger MCU characters might be up to in the near future. America Chavez is on the run from a multiversal parasitic demon known as Mother. It’s a bit on the nose, isn’t it?

Among the Young Avengers, America gets to work alongside twin brothers Wiccan and Speed. So as an added bonus, you get to see Billy and Tommy in action instead of just singing weird songs about ice cream.

No, seriously, what the hell was that?

Jonathan Hickman wrote one hell of a string of epic comic runs in the mid-2010s. Starting with Fantastic Four and FF, he then did Avengers and New Avengers, which led straight into Secret Wars. As Avengers deals with a bloated version of the team fighting some major threats, New Avengers is more about what the Illuminati is up to. This time, the line-up is made up of Doctor Strange, Reed Richards, Iron Man, Black Bolt, Black Panther, Namor, Smart Hulk, and Beast.

“Everything dies,” Reed warns, as the multiverse is beginning to collapse upon itself. Every few days, “Incursions” are beginning to happen, where two alternate Earths are set to collide. Either one destroys the other or both are destroyed. The Illuminati must to do everything they can to survive and hopefully find a solution. Perhaps, even at the cost of causing genocide.

For Strange, his path includes damnation. He fully gives himself to the dark path of sorcery for the sake of saving his world. This gives us the telltale forehead eyeball that we see in the movie. While he does throw his soul away, Strange at least becomes important in saving all of reality when he meets the mysterious, worshiped being known as Rabum Alal.

Sometimes Marvel tries to write new stories that sort of tie into what’s going on in their movies. For instance, when Spider-Man 3 was in theaters, they made sure to release a flashback story about Spider-Man in his black costume fighting Sandman. Just before Black Widow finally came out, there was a Taskmaster miniseries where Black Widow was hunting him down. When Avengers: Infinity War came out, Marvel did a storyline called Infinity Wars, where Gamora wielded the Infinity Gauntlet and reduced the universe’s population by half in her own unique way.

For Doctor Strange in the Multiverse of Madness, the big tie-in comic is Darkhold by Steve Orlando and Cian Tormey. It’s a big team-up of random Marvel characters, but it mostly focuses on Scarlet Witch as she takes on Chthon, the demon who created the Darkhold to begin with. It also has a lot of Doctor Doom, which is always welcome.

Even though Scarlet Witch is meant to be a hero in current comics, the new status quo from the ending does leave her future a little open-ended and allows Marvel some easy creative freedom.

Doctor Strange and America Chavez aren’t really close in the comics, but if you want to see some multiversal hijinks between Strange and a teenage girl superhero, you can do worse than the third issue of Gwenpool’s comic. Gwen Poole is a girl from our world who ended up in the comic universe. Due to her understanding of comic book tropes, she knows that being a main character will keep her safer than being just a random bystander.

She comes across Strange in one issue, who helps her adapt to the world and at least gets her some paperwork and a working social security number. A true highlight is Strange peering into Gwen’s world, where he notices that the events of the Marvel Universe are echoed and recorded in the form of comics, cartoons, and films. Strange then notes, while looking at a movie theater, “Benedict Cumberbatch, eh? Sure, I could see that.”

Marvel’s Avengers Superior Seminar | Hulk
Why Google Stadia Failed and Is Finally Shutting Down
Taskmaster: Ranking Every Series From Merely Quite Good to Ludicrous Best
13 MCU Theories That Were Too Good to Be True
GamesMaster: Before YouTube and Twitch, Sir Patrick Moore’s Floating Cyborg Head Was the Pinnacle of Gaming TV