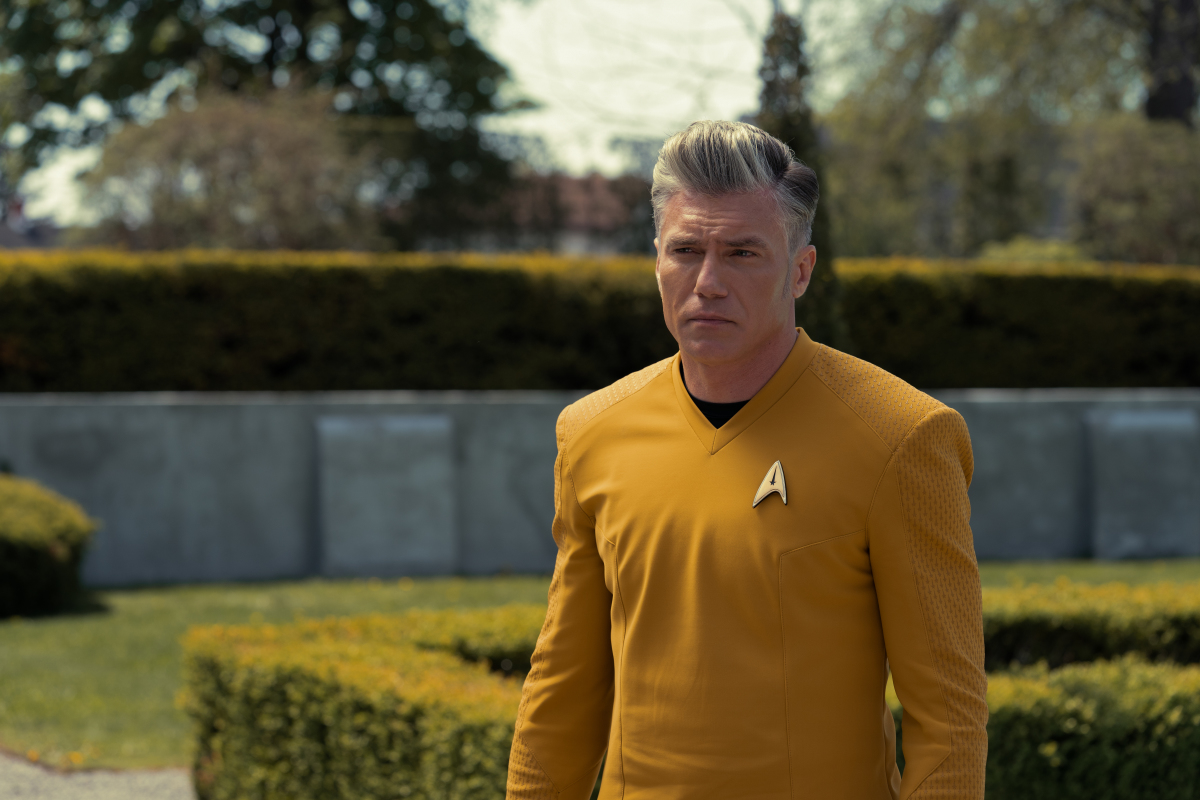 One of the best things about Star Trek: Strange New Worlds is the way that it completely blows apart the idea that week-to-week episodic television can’t be as deep, nuanced, or emotionally impactful as more serialized stories with season-long arcs. In fact, I’d argue that even though Strange New Worlds has self-contained adventures that take place in each episode, it is also telling plenty of meaningful, long-term character stories at the same time. The biggest and most obvious is the fate of Captain Christopher Pike, whose radiation disfigurement and paralysis won’t even occur for another decade, but still colors his day-to-day life thanks to the vision he saw of his own future.

Deciding who he’ll be in the face of that foreknowledge is now, essentially, Pike’s life’s work and Strange New Worlds will have to figure out how to tell stories about his character that reflect that inner struggle without getting either repetitive or overly saccharine about it. “Lift Us Where Suffering Cannot Reach” is the first predominantly Pike-focused episode since the series’ pilot, and is an hour that sees the captain not only truly fail for the first time, but face a serious and shocking betrayal from someone he clearly once cared deeply for. The hour also deftly reinforces why Pike is always going to be doomed—and reminds us, as viewers, why we shouldn’t wish him otherwise (as much as we may hate it, at times.) Because even if Pike’s future somehow isn’t written in stone, it is irrevocably tied to who he is, and the man he is will never put his own life ahead of those in his care.

This episode sees the Enterprise embark on a cartography mission to the Majalan system, a star cluster on the edge of Federation space that Pike himself once visited a decade earlier as part of a rescue attempt. But when the crew answers a distress call from a Majalan ship under attack, he’s reunited with an old flame—and his crew finds themselves charged with protecting an important child from a kidnapping plot. Though the Majalans were offered Federation membership, they declined it, preferring to keep their own customs and ways private. (It turns out there’s a really obvious reason they might want to do this, but I guess then-Lieutenant Pike was too busy falling for the pretty young girl named Alora to ask a lot of questions about how her society was structured and/or what weird sacrifice-based rituals they might have.)

Alora, now a Majalan leader in her own right, oversees a being known as the First Servant, a holy child chosen by lottery to embody the maxim of their people (“science, service, sacrifice”), though no one is ever too specific about what exactly any of that means. According to the Majalans, the First Servant’s imminent Ascension will usher in a new era for their planet and allow them to continue to live the way they do, complete with luxury floating cities and highly advanced medicine. Given the constant googly eyes she and Pike make at each other whenever they’re in the same room, it’s clear he’s not super interested in what any of this really involves on a larger cultural scale. It’s amazing it takes the two until the episode’s midpoint to hook up.

After all, a Starfleet captain falling for a pretty if slightly manipulative alien lady is a common enough tale in the Star Trek universe. The addition of a preexisting love connection between them makes this a little sweeter and generally less uncomfortable than some of The Original Series “relationships” we see Captain Kirk engage in (and is, on the whole, less life-changing than the official synopsis of this episode might have had some viewers believe). Yet, Alora’s presence isn’t really about their romantic relationship—however, you choose to define it—or about simply providing a reason for  Anson Mount to take his shirt off, it’s actually another surprisingly powerful window into Pike’s emotional journey, and the weight of the secrets he carries.

The bulk of the episode involves a complicated plot in which the Enterprise crew is charged with helping keep the First Servant alive until his Ascension Day, and though the episode drags out some of its more obvious revelations—of course, it wasn’t actually strangers trying to kidnap him, and, duh, Alora was lying about something—the twisty plot is full of tension and genuine stakes. I’m sure no one was surprised when it turned out that the Enterprise didn’t really accidentally kill a child, but I also doubt anyone expected that “Lift Us where Suffering Cannot Reach” would turn around and sacrifice the boy almost immediately anyway, as the First Servant’s body is literally turned into the battery which powers the bulk of Majalan technology.

To be fair, this is pretty grim storytelling for a Star Trek series, but perhaps a necessary reality check after this first run of Strange New Worlds episodes, which generally involved happy endings, daring escapes, and hijinks all around. Not every story can end well and not every alien race will be good, at least not in the way that we understand the concept. The fact that Pike, who so desperately wants to do something to help upend a civilization that literally powers itself with the lives of children, has no jurisdiction to do anything at all, is frustrating in a way that feels almost painfully realistic. (And, not for nothing, but Alora’s insistence that our human society simply doesn’t want to look at the sins it regularly perpetrates against its weakest members is…well, not entirely wrong.)

Perhaps Pike’s constant desire to tell all and sundry about his (presumably secret?) destiny of suffering and physical agony reflects his need to believe in the possibility of changing it—i.e. If he tells enough people about the future he saw it will force that future to change somehow or if he tells the right person he’ll find the one that can fix it. But, the fact that the first non-Starfleet-affiliated person he tells turns out to be the leader of a culture that powers its own comfort through child sacrifice basically affirms why Pike, perhaps the brightest, most empathetic figure in the Star Trek canon at the moment, is never going to turn away from the future he saw on Boreth. No matter how much some of us (read; me) might wish he would.

Pike is not the kind of man who would ever trade innocent lives for his own, or ask someone else to bear the weight of the choices he makes. It breaks my heart because I adore this character and he deserves a better future than the one this universe keeps telling us is waiting for him. But it also means that, when it matters, Pike will choose the right thing, simply because he is not willing to sacrifice others for his own gain. It’s what makes him such a great leader, and it’s what makes his fate such a tragedy. I know a lot of Star Trek fans out there probably also watch Doctor Who, so I suspect you will understand all this no matter how poorly I draw the comparison-–I don’t know if having “a captain” is a thing in this fandom the way having “a Doctor” is there (mine is Nine, for the record). But if it is, Pike is certainly mine—and it’s episodes like this that remind me of why.