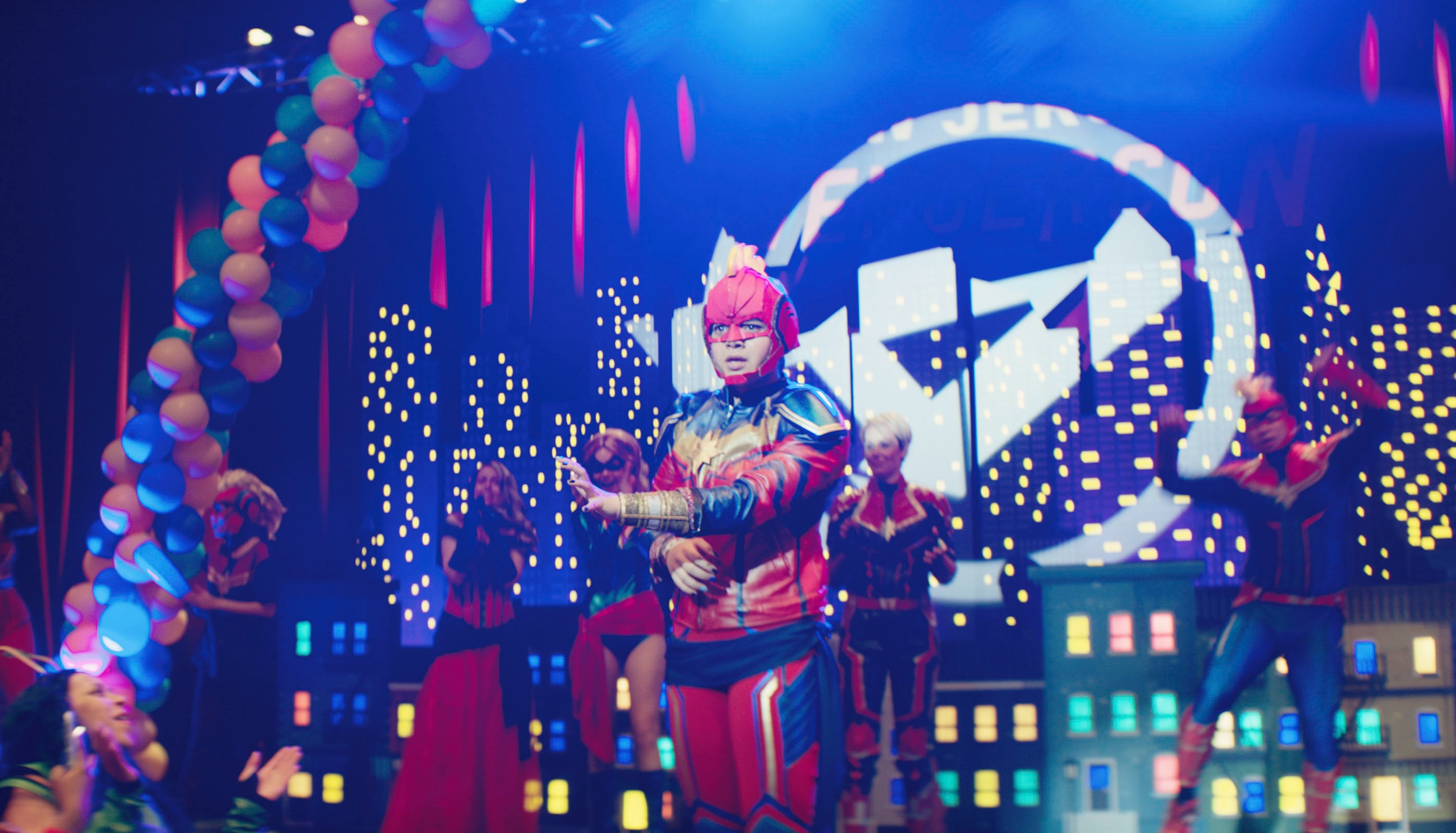 Being a fan has been part of Kamala Khan’s DNA since the character was first created for Marvel Comics back in 2013. So it seems only natural that the first fan convention in the Marvel Cinematic Universe occurred during the premiere episode of Kamala’s solo Disney+ series Ms. Marvel. In a world as rich as the MCU, it stands to reason that it would only be a matter of time before love for these heroes would coalesce into fandom conventions.

For Adil El Arbi and Bilall Fallah, the directing duo and executive producers who brought AvengerCon to life, the experience was exactly as much fun as you think it would be. They called it their favorite set ever. Distractingly so, though we can’t say we blame them.

“We were like fanboys ourselves, you know, taking selfies, playing around with all the stuff,” Fallah says. “The producer had to come to us and say, ‘Hey, guys, come on, direct! Focus.’”

The pair worked with production designer Chris Glass and cinematographer Robrecht Heyvaert to create, “an homage to all the fandom,” (that’s Fallah, but these two jump into each other’s sentences often enough that they’re clearly on the same wavelength.) He continues, “Creating that world and giving that respect to the fandom that makes the Marvel Universe so big and makes those superheroes big, that was really our love letter to them.”

Ms. Marvel often shouts out coming of age movies, but during the AvengerCon scenes, they got to shout out another screen icon. El Arbi says, “The coolest thing, I think, was coming up with the ideas with Chris Glass that the big Ant Man head would fall, and then he would create this Indiana Jones kind of action moment.”

If you’re hoping that AvengerCon might someday be real, you’re not alone. According to EP/head writer Bisha K. Ali, you have to line up behind the Ms. Marvel writer’s room. “There is a draft email from every single writer in the writer’s room being like, ‘Bisha, how do we pitch Kevin Feige to make AvengerCon real?’ I still have it in my drafts. I have not sent it, but I’m here for it.”

Thankfully, it seems like the Ms. Marvel writers (and half of the internet) will likely get their wish.

Ms. Marvel executive producer Sana Amanat shares that some of the AvengerCon props are going to be circulating, “I think on the Disney campuses,” which Feige seemingly affirmed at the same press conference, saying, “There might be a few places that you can go and visit the Ms. Marvel version of AvengerCon, yeah.”

Beyond putting some (admittedly very cool) objects in a glass display case, according to Feige, there’s a chance AvengerCon might actually become reality, saying it might be “fun to do sometime.”

Conventions are an essential part of fandom life for so many people, from cosplay and photo calls to merch and panels, connecting in person communities that typically meet online, a function that has only become more important in recent years. Feige explains, “We were definitely talking about that on the set. We shot that right, you know, in the middle of COVID protocol, so there hadn’t been a convention for a very long time. And it was very cathartic for all of us to see that.”

AvengerCon has a surprising connection to another part of the MCU: Spider-Man: No Way Home was filmed next door. Feige explains that “a lot of that crew kept sneaking over to see, and attend AvengerCon, walking around.”

The sneaking wasn’t just one-sided—Amanat recalled a story involving Feigi taking El Arbi & Fallah over to see the iconic “three Spideys” scene. Fallah shared that Tom Holland then came back over to the Ms. Marvel set to see AvengerCon, calling it “a pretty epic moment.”

Hopefully someday soon, we’ll all be able to experience AvengerCon, and maybe Ms. Marvel and Spider-Man will stop by that one, too.