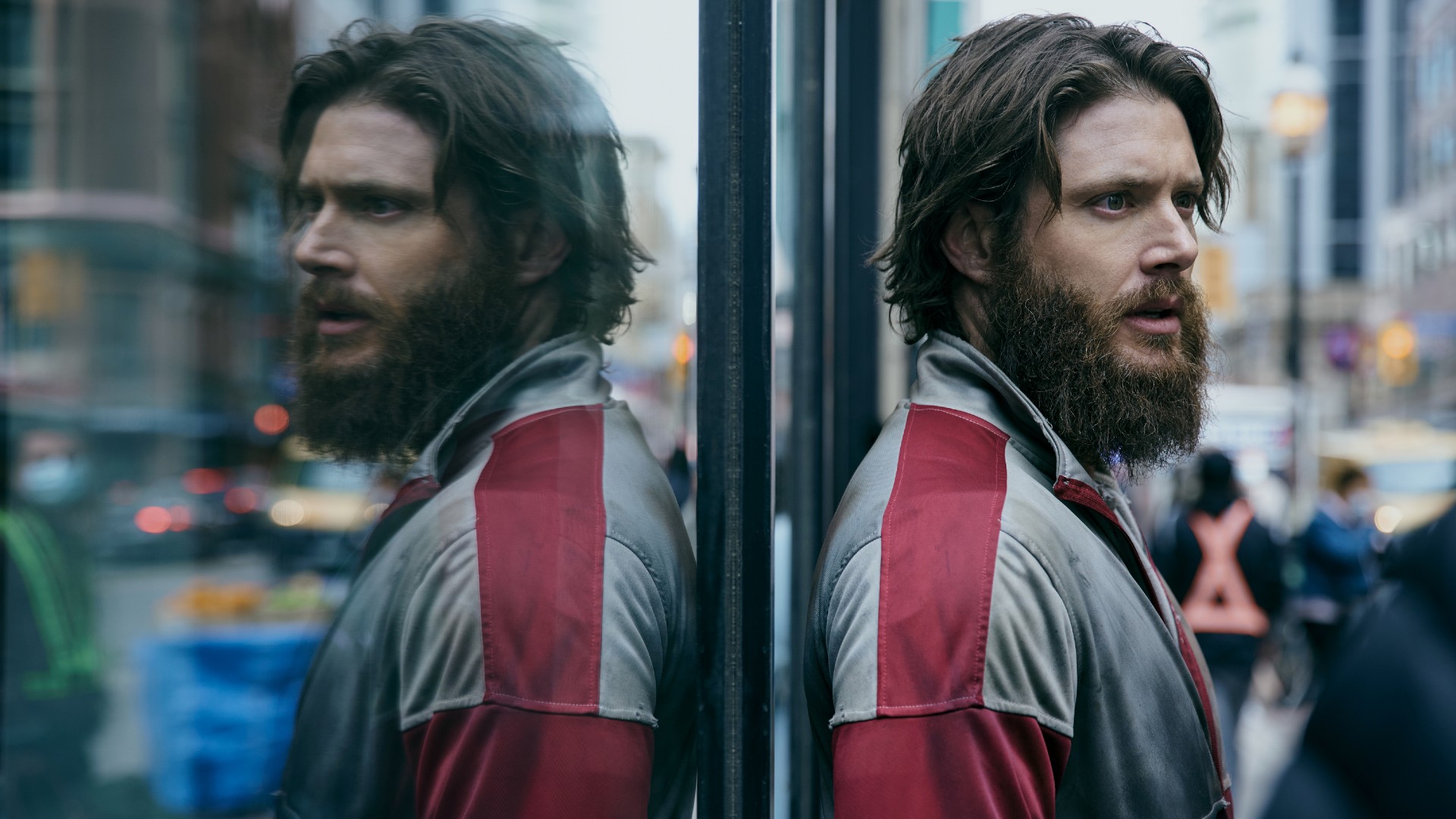 This article spoilers up to The Boys season 3 episode 5 and minor spoilers for all of Supernatural.

Jensen Ackles played Dean Winchester for 15 years on Supernatural – and he’ll be doing so again, in voice-over, for CW’s The Winchesters this autumn. Of course, Ackles is a professional actor and entirely capable of playing more than one character, and like his co-star Jared Padalecki (now playing Walker, Texas Ranger, for the CW’s Walker) he did other things during Supernatural’s run as well. But still, that length of time inhabiting one character is bound to have an effect on an actor’s choices. In fact, it can be a real bonus in creating a new character, even one as different from Dean Winchester as his new character on Prime Video’s The Boys, Soldier Boy.

The Boys isn’t totally unrelated to Supernatural, as it was developed for television by Eric Kripke, the creator of Supernatural and showrunner for its first five seasons. Kripke had already hired Supernatural alumnus Jim Beaver as – wait for it, Supernatural fans – Robert A. Singer, Secretary of Defence now running for President (a deliberate shout-out – it was Robert Schaefer in the comics). “Dakota Bob” even comes from the same area as Supernatural’s Bobby, thus confirming that The Boys is some kind of parallel universe where Bobby went into politics. But we digress.

By contrast, Jensen Ackles’ The Boys character is in many ways the polar opposite of Dean Winchester. Whereas Dean was a hero, Soldier Boy is most definitely a villain, and a crass, sexist, deeply unpleasant one at that.

In an interview with USA Today, Ackles talked about how Dean is “fighting the good fight in the shadows”, while Soldier Boy “pretends to fight the good fight in the spotlight”. This is probably the most significant difference between the two characters, and it’s where Ackles really gets a chance to stretch his acting muscles in new ways after 15 years. Although Dean was constantly pretending to be happier and more confident than he really was, Soldier Boy show-boats in a way Dean Winchester never would, and he lives his life in the public gaze and under the spotlights of the media. When Soldier Boy and the rest of his ‘Payback’ team land in Nicaragua in a flashback in Episode 3 of Season 3, it’s clear that Ackles is having a ball playing a character who demands attention and who expects – and gets – awed stares from everyone around him as they watch.

Ackles played villains on Supernatural a few times, usually when one villain or another was possessing Dean Winchester’s body. The two most significant were Demon Dean in the first three episodes of Season 10 (and occasional flashbacks) and Alternate Universe Michael in Seasons 13 and 14. Michael was a cold and calculating Archangel – very different in nearly every way from Soldier Boy – in voice, manner, how he held himself and even how he walked. Demon Dean was actually Dean himself, transformed into a demon, and therefore carried over some of Dean’s traits, but without the conscience.

Demon Dean in particular may be an inspiration for elements of Soldier Boy. Although Soldier Boy is clearly an unhinged villain, Butcher reminds us in episode 5 of Season 3 that “all the V does is just pump up all that shit that’s already inside.” Some of Soldier Boy’s traits are exaggerations of traits he even shares with Dean, but blown up out of proportion to the point of villainy. We saw some of these in Demon Dean, who had just a little bit of Soldier Boy’s swagger in his sense of humor, his carefree attitude to violence, and his toying with others’ emotions. These are qualities that were buried deep inside Dean himself, and that being transformed into a demon allowed out into the open.

We can see this really clearly in the attitude of both Demon Dean and Soldier Boy to women. Dean Winchester, when not a demon, had a Captain Kirk-like love of flirting and a fondness for porn and for admiring attractive young women that was usually fairly harmless. In 2005 when the character was 26 years old this was an amusing character tic; by 2020, when the character was 43 (more or less, including two time jumps and not counting time spent in Hell) and the world had changed, this aspect of Dean’s character had been largely phased out because it was coming across a bit uncomfortably.

Demon Dean transformed regular Dean’s largely respectful love of women into sexism and creepiness, calling women he slept with “skank” and accusing dead women of being “dressed like a whore”. We can see similarities here with Soldier Boy’s treatment of women.

Soldier Boy combines attitudes rooted in his early twentieth century origins with simple unpleasantness. He spent time partying with Hugh Heffner and is shown in flashback leering at Grace Mallory, calling her “pretty” entirely inappropriately given the professional, military context, commenting on her figure in the middle of a mission, and telling her “you should smile more”. There’s a reason that line appears both here and in Captain Marvel – it’s a deeply patronizing request women have often heard from a certain type of man. The fact Soldier Boy was betrayed by Crimson Countess in the 1980s suggests he wasn’t great in a relationship either. Ackles himself described “toxic masculinity” as something Soldier Boy “embodies” – where Dean Winchester was sometimes hurt by his own expectations of what it meant to be “manly”, Soldier Boy revels in the worst type of sexism.

There is one similarity between these characters that Ackles has had plenty of practice at – being tortured! Soldier Boy is at his most sympathetic when we see what the Russians did to him, and the effect it has had on him. These scenes will be all too familiar to Supernatural fans, since Dean underwent significant bouts of torture several times during the course of the show. Ackles has a well-known ability to expertly express both physical and emotional pain in his performances, and he does so just as effectively here as on his previous show. It’s almost enough to make us root for Soldier Boy, just for a moment.

Of course, there’s more to Jensen Ackles than Dean Winchester. It’s well known that Ackles has come close to playing superheroes many times throughout his career. Over the years, he has been considered for Superman (in the CW’s Smallville, which ran 2001-2011, starring Tom Welling), Captain America (in the MCU) and Star-Lord (ditto) and he is finally playing a major superhero by voicing Batman in animated film Batman: The Long Halloween, Part One.

Soldier Boy is a combination of all those heroes rolled into one. He is a direct parody of Captain America (crossed with just a bit of the Winter Soldier), and is set to clash with Homelander, The Boys’ answer to Superman. Both characters are deliberately and consciously opposed to their inspirations in terms of personality and morals, while coming across the same way as their more genuine good-guy counterparts in the media. Soldier Boy also draws on the darkness of Batman, a grim character prone to dishing out vigilante justice, but he does it with the swagger of Star-Lord.

Soldier Boy is a bigger, hammier, performance than any of these more serious superheroes, but in his confidence and big personality, especially in the flashbacks to happier times, we may be seeing a twisted version of what Ackles’ Star-Lord could have been. Deep down underneath though, whenever those flashbacks to torturous scientific experiments and past pain emerge, we know we’re seeing just the tiniest bit of Dean Winchester.

The Magicians Season 4 Episode 1 Review & After Show
15 Difficult NES Games That Were Easier in Other Regions
The Boys Season 3: How That Imagine Video Came Together
Sci-Fi Short Film: “Best Friend” | DUST
Stranger Things Season 4: Could Vecna’s Victims Be Key to Defeating Him?