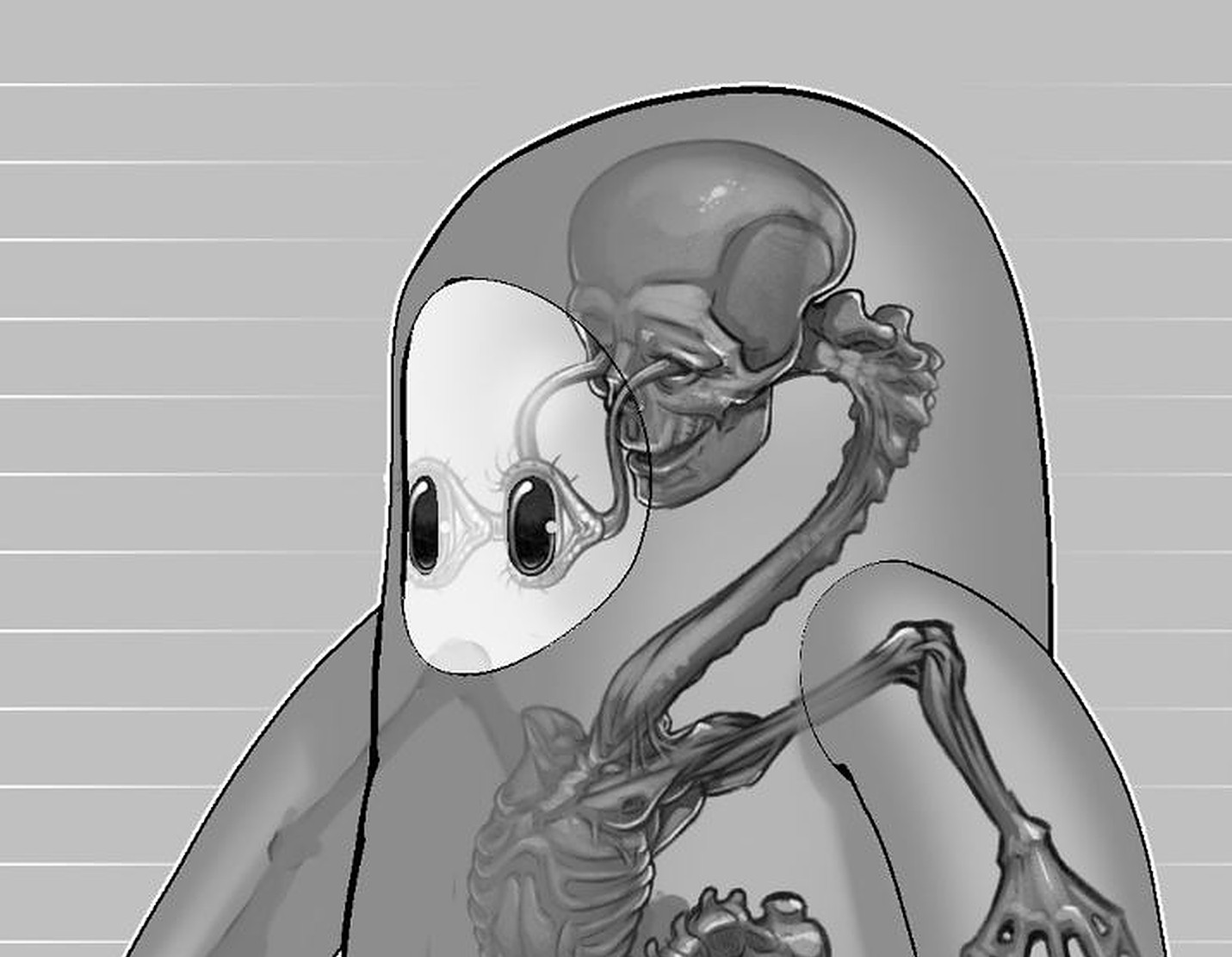 In 2020, Fall Guys became one of the biggest hits of what is sometimes referred to as the “pandemic era” of the gaming industry. While the platformer battle royale game fell off the radar a bit in 2021, Fall Guys‘ recent pivot to a free-to-play model has proven to be a huge success. Recent reports reveal that the game has even reached over 50 million players since the free-to-play transition occurred just two weeks ago. Of course, that also means that a lot more people are suddenly realizing that Fall Guys is built upon some truly disturbing lore.

Now, it’s perfectly possible to play and enjoy Fall Guys without ever thinking about its lore or world-building. Indeed, the chaos of the average Fall Guys match often makes it difficult to focus on anything other than “not falling down a pit” for more than a few seconds. However, those who have been playing the game for the better part of the last two years have started to ask questions about what is actually happening in Fall Guys and who the Fall Guys themselves are. While the Fall Guys team admits that they didn’t really craft intricate lore for the game ahead of its release, they’ve since been more than happy to answer a few questions people have about that aspect of the game. Unfortunately, the vast majority of those answers have proved to be…troubling.

Don’t believe me? Well, here are a few things you should know about the darker side of Fall Guys‘ lore.

The Simple Question “How Tall Are the Fall Guys?” Led to a Terrifying Reveal

Not long after Fall Guys was released, people started to ask “How tall are the Fall Guys?” While I’m not entirely sure why that question always seems to come up in relation to fictional characters (remember the Lady Dimitrescu situation?), the Fall Guys team was quick to respond to those queries with a seemingly simple answer.

Not entirely satisfied with that information, fans started asking even more questions about the Fall Guys’ anatomy and vital statistics. Said questions were again promptly answered by the Fall Guys team, though their response soon left many wishing they’d never even bothered to ask those questions.

Now, I don’t like to throw the word “abomination” around unless it’s absolutely necessary, but I’m struggling to find another word that better describes that X-ray image. It’s like someone asked H.R. Giger to draw the skeleton of a McDonald’s chicken nugget. I mean…are Fall Guys just constantly in pain? Because that image really makes it look like they are constantly in pain. There’s not a single part of that skeletal structure that is bending the way it is supposed to be bending.

At the time, that image simply seemed like the developers’ (effective) attempt to troll the Fall Guys faithful. Since then, though, we’ve learned a little more about Fall Guys‘ lore, and every new bit of information suggests that image is closer to the rule rather than the exception.

The Fall Guys Eat Through Their Feet

While you would think that the image above would eventually inspire fans to just stop asking questions about Fall Guys‘ lore, some gamers just couldn’t help themselves. Specifically, some Fall Guys players started to wonder how the Fall Guys ate food given that they seemingly have no mouths (and presumably must scream). Unfortunately, for all of us, Fall Guys‘ community director was all-too-happy to answer that question via a disturbing Discord message.

Before you start thinking that detail actually came from some wayward Fall Guys fan who is determined to keep trolling the rest of us, you should know that the official Fall Guys Twitter account responded to that reveal with an all-too-enthusiastic confirmation of that information.

As many Fall Guys fans have pointed out, that reveal opens up a number of truly disturbing possibilities. Does that mean that Fall Guys have to taste the courses they run around on? What is it like for them to get their feet stuck in slime or any of the game’s other hazards? Does this also mean that the sounds we hear Fall Guys make are coming from their feet? Is that why they sound so muted and painful?

While the team seemingly hasn’t answered those questions quite yet, everything else they’ve said about the Fall Guys tends to suggest that they’re really into the idea of forcing them to experience as much pain as possible.

Some battle royale games try to offer an elaborate explanation for why you’re competing against others in a “last participant standing” scenario, while others are happy enough for you to accept your circumstances without question. Fall Guys was a member of the latter camp until designer Joe Walsh offered this explanation for the Fall Guys contest in an interview with The Gamer:

“Fall Guys live to compete and do so 24/7. They’re either competing or waiting to go again…I like to think that the broadcast is going out across the universe for anyone to stumble across if they manage to find the frequency. Anyone can find Fall Guys TV if they twiddle the dial enough. Dials being a thing that TVs definitely still have.”

Yes, as if the Fall Guys’ agonizing anatomies didn’t cause them enough pain, it seems that the game’s developers would also have us believe that they live to participate in a never-ending battle royale competition that is broadcast over a pirate station. That last part is particularly disturbing. After all, the entire Fall Guys lore was already close enough to being body horror without the idea that the competitions are being broadcast over a Videodrome-like torture network being brought to the party.

It gets worse. According to Walsh, that cheering you hear when you’re playing Fall Guys is actually “pumped into the world to create more atmosphere for the viewers.” He even suggests that different viewers hear different cheering based on where they’re tuning in from. He described what we hear as the screams of “terrifying human children.”

Again, it’s obvious that the developers are making all of this up as they go along in order to have a little fun with us, but that doesn’t mean that they’re not sticking to elements of the game’s lore in official promotional materials. Actually, this shot from Fall Guys‘ Season 6 trailer seemingly offers a glimpse at the control room that broadcasts Fall Guys matches to the universe:

At this point, you’re probably thinking, “Well, at least I can offer my Fall Guy an escape from this nightmare scenario every time that they’re knocked out of a match.” So far as that goes, I somehow have even more bad news for you.

By now, you should know better than to ask any questions about the Fall Guys universe unless you want an answer you may or may not be able to handle. Even still, I’m willing to bet that every Fall Guys player has wondered what happens to their character when they fall off-screen and lose a match. Unfortunately, Walsh has an answer for that too.

“A moment of displacement, serenity, zen-like detachment from all worldly and physical bonds… Then they pop back onto the podium to celebrate their achievements!” Walsh says regarding the nature of the Fall Guys’ afterlife. “What you’re seeing when you respawn is the same Fall Guy, so the more you play the more you’ve been through together. You’ve put that Fall Guy through a lot, you know.”

It’s that last part that really stings. It’s bad enough to know that we’re regularly yanking Fall Guys out of their serenity in order to do our bidding (aka the “Buffy the Vampire Slayer“), but the fact that they seemingly remember the many, many times I’ve failed them is truly tough to bear. It’s bad enough that I have to be reminded of the many Fall Guys matches I’ve lost over the years. I don’t see why the Fall Guys should also carry that psychological trauma with them.

As if that wasn’t enough, Walsh suggests that Fall Guys simply “fill the void” when they’re not actively participating in the competition. Honestly, I just don’t want to sympathize with my Fall Guy as much as I do.

While developers have gone to some pretty desperate lengths to get you to buy cosmetic DLC over the years, few have resorted to suggesting that not buying a character skin means forcing your character to compete while naked. As you’ve undoubtedly figured out, though, that’s exactly what the Fall Guys team is willing to do.

“I can confirm they’re naked when you don’t equip a top or a bottom,” Walsh said. “Luckily they can’t feel the cold (or be embarrassed on live TV) so we’ve decided to embrace it.”

It’s nice to know the Fall Guys have no shame (I suppose that’s a side effect of enduring an eternal existence built around a universally broadcasted competition), but I’d like to think it’s not up to me to offer them basic garments by winning or spending a little money. Again, though, I’m honestly shocked that the Fall Guys team jokingly offered that explanation before EA or Activision Blizzard threatened their fans with similar microtransaction-friendly lore.