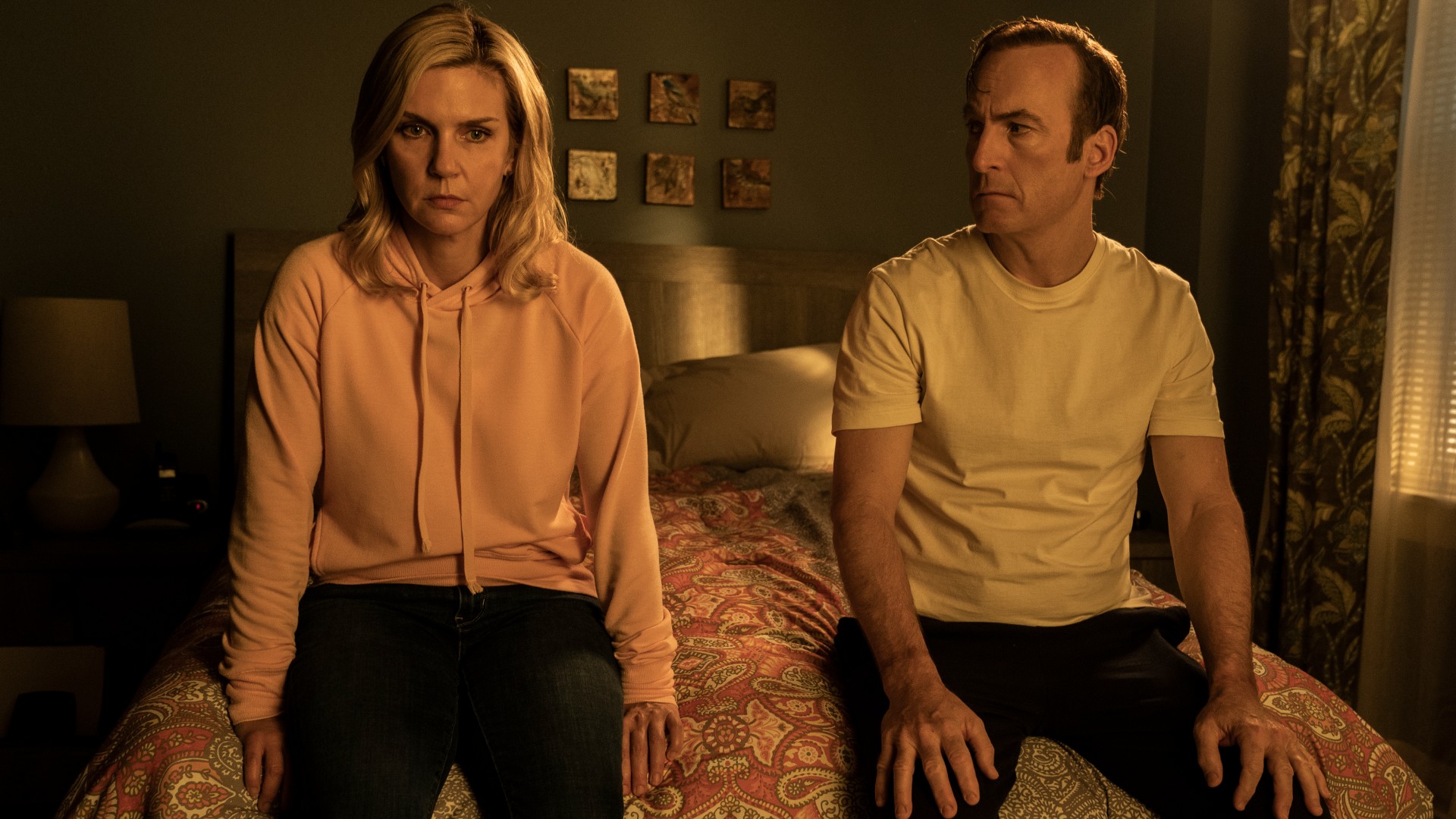 Better Call Saul is supposed to be a crime show, a lawyer show, and a spinoff of Breaking Bad that gives us some great Easter eggs that tie the universe together. It’s a show about brothers (Jimmy and Chuck), and it’s a show about regret (Mike and his son). But above all else, it’s a show about quiet romance. And there’s no love story on television like the one between Jimmy McGill (Bob Odenkirk) and Kim Wexler (Rhea Seehorn).

When we first meet these two characters, we don’t understand entirely what their relationship is. Are they just friends? Do they have benefits? Are they dating? The answer is all of the above, and then even more.

The pair don’t express their profound romantic kinship with each other in the way other fictional couples do. They only just said “I love you” to each other for the first time onscreen once their union was finished. They hardly ever kiss, or become passionate. And all of this is okay, because certain actions speak much louder than words.

To be honest, Jimmy and Kim love each other in such a deep and indescribable way that they have their own love language. They’ll do anything for each other, even destroy other people’s lives and commit crimes.

Their poisonous combination finally ended on Monday in “Fun and Games,” much to everyone’s dismay. The scene in which they break up is one of the most heartbreaking in recent TV history, so let’s try to be a little more positive and remember the good times between the Goodmans (as Lalo liked to call them).

We don’t know all of the details of Jimmy and Kim’s history together, but a flashback scene in the first season indicates the two have been working together for many years at HHM. They were both down in the mail room at one point, and Jimmy finds out that he passed his bar exam and will officially become a lawyer.

Kim is the first person he tells even though Chuck is right there in the room. Who we share our biggest accomplishments with first says a lot about who we love, and this is a special little moment that shows their significance to one another.

9. They Make Love After Being Naughty

Many people get frustrated that Jimmy and Kim never show much physical intimacy throughout the show, and they take this as a sign they aren’t actually in love. This couldn’t be further from the truth. In fact, they save sex for special occasions that indicate they’re really on the same page as a couple.

This happens usually after they have successfully completed one of their schemes together. From role-playing as Gisele and Viktor, to ruining Howard Hamlin’s career, the couple always top off a huge night by having intercourse metaphorically atop the misery of their opponents. This really drills home the excitement they feel for one another and the warped sense of accomplishments they desire.

8. Jimmy and Kim Are Proud to Be Married

Kim suggests that Jimmy and her get married halfway through the fifth season simply as a means to protect her in case she has to testify against him in court, and they have one of those 15 minute courthouse weddings with Huell Babnieaux (Lavell Crawford) serving as their only audience member.

As many people on social media have noticed since that episode, Jimmy and Kim subconsciously seem to take much more pride in their marriage than the average couple.

So even though they tell themselves they’re married simply for legal reasons, their matrimony clearly meant a whole lot more to them than they ever wanted to let on, and it’s absolutely adorable.

Jimmy and Kim love to scheme together. It’s their unique way of having fun that also incidentally ruins other people’s lives. This time late in season four is one of the times they are actually using their intellect and cunning to help someone with a scam, as they find a way to deceive the courts and get Jimmy’s bodyguard, Huell, out of a prison sentence.

Put this storyline in the column explaining Kim’s love for Jimmy, as she once again is putting her career on the line to help him. If anyone found out about all of the falsifying of evidence that the couple do to win their case, it would disbar Kim from practicing the law forever (although she does end up doing that anyway in this current season.)

6. Kim Breaks Down Finding Out Jimmy is Alive

Kim Wexler is not a very outwardly emotional woman. She keeps her feelings close to her chest, but the scene in which she finds out Jimmy is alive after he went missing in season five’s “Bagman” is one of most emotionally raw moments in the series.

There is a devastating cold open that details Jimmy and Kim’s juxtaposed mornings, the former wading his way through the desert and the latter worrying sick about him. It ends in Kim hearing Jimmy’s voice through a phone call, and the tears start flowing, both for the audience and for Kim. It’s a perfect way for the show to demonstrate the way both characters express themselves with each other.

5. All the Smoking Sessions

When Jimmy and Kim decide to smoke together, it’s almost their way of being physically intimate. There are so many different times throughout the show that they share a cigarette before a big moment, or in a time of solitude and cool down.

There’s the iconic first time in the parking garage in the pilot episode, to the fallacy of sunk costs quote in front of the glass windows of their shared law office. Whichever is your favorite, it’s sure to come with a genuine conversation of love and some beautiful cinematography that symbolizes their special romance.

When Jimmy has to defend himself in court against his brother Chuck in the middle of the third season to keep his law degree, Kim decides to represent him as legal counsel. By doing this, she is putting her name in the mud simply by associating with Jimmy. After all, he vandalized Chuck’s home and threatened him to try and destroy the tape that has his confession about botching the Mesa Verde Bank and Trust numbers (more on that later).

This is the biggest moment of Jimmy’s professional life to this moment, and it’s the tipping point in the feud with his brother Chuck. She serves both as emotional support and a strong partner in litigation. It’s another instance of the ways both characters support each other in multi-faceted ways rather than one simple gesture.

When Lalo comes to the apartment in season 5’s “Bad Choice Road” to interrogate Jimmy over his involvement in the desert in the previous episode, Kim decides to intervene and stick up for her husband even when she doesn’t know all of the details of what happened.

This moment of courage is one of the reasons so many people define Kim as an all-time strong female character, and it’s a towering moment of flipping gender roles. So often Jimmy feels he needs to be Kim’s protector, but she steps up to the plate with a psychotic drug criminal right in her living room. She truly is made of sterner stuff.

Kim thinks that acquiring Mesa Verde Bank and Trust for HHM will get her out of the dog house with Howard in the middle of season two. Instead, Howard only takes her out of the mail room once Chuck puts in a good word for her. This prompts Kim to leave HHM and enter into a battle for her own client with her former employer. When she loses out, Jimmy goes to great lengths to sabotage HHM’s case file filled with pertinent information regarding Mesa Verde’s proposal to open more locations.

This is one of the bigger felonies Jimmy commits in the show, and it sets up the conflict with Chuck that will eventually cause the older McGill to kill himself. He does it because he knows how much Kim deserves to represent the client she found for HHM, and it’s the biggest instance of Jimmy aiding Kim’s ascendance in law.

1. Jimmy and Kim Try to Protect Each Other From Lalo

This whole situation in the sixth season’s midseason premiere is the ultimate symbol of Jimmy and Kim’s love for one another. When Lalo tries to use Jimmy as a diversion so he can get to Gus’s laundry lab/meth lab by asking him to drive over and shoot Gus, Jimmy convinces Lalo to ask Kim to do it.

Why? Because whatever happens, he doesn’t want Kim alone with Lalo. It’s assumed that he wants Kim to run away from everything instead of following through with the murder attempt, but that’s not how Kim rolls. She actually takes Lalo up on his request and would have shot Gus at point-blank range if not for Mike intervening. This is someone who has never even fired a gun before, willing to become a murderer just so Jimmy is safe from Lalo’s torture.

These people are willing to kill and die for each other, something that can hardly be said about any other couple on television. Here’s to hoping that Jimmy and Kim meet up in Nebraska sometime during the last four episodes of the show. They don’t deserve a happy ending, but the audience does, right?

MST3K Season 13 is Embracing the Chaos
Streaming Tomorrow | Marvel Studios’ Shang-Chi and The Legend of The Ten Rings | Disney+
World of Warcraft Classic: Best WotLK Addons to Download
Sci-Fi Short Film “Golden Shot” | DUST
How to Get All Cyberpunk: Edgerunners Equipment in Cyberpunk 2077