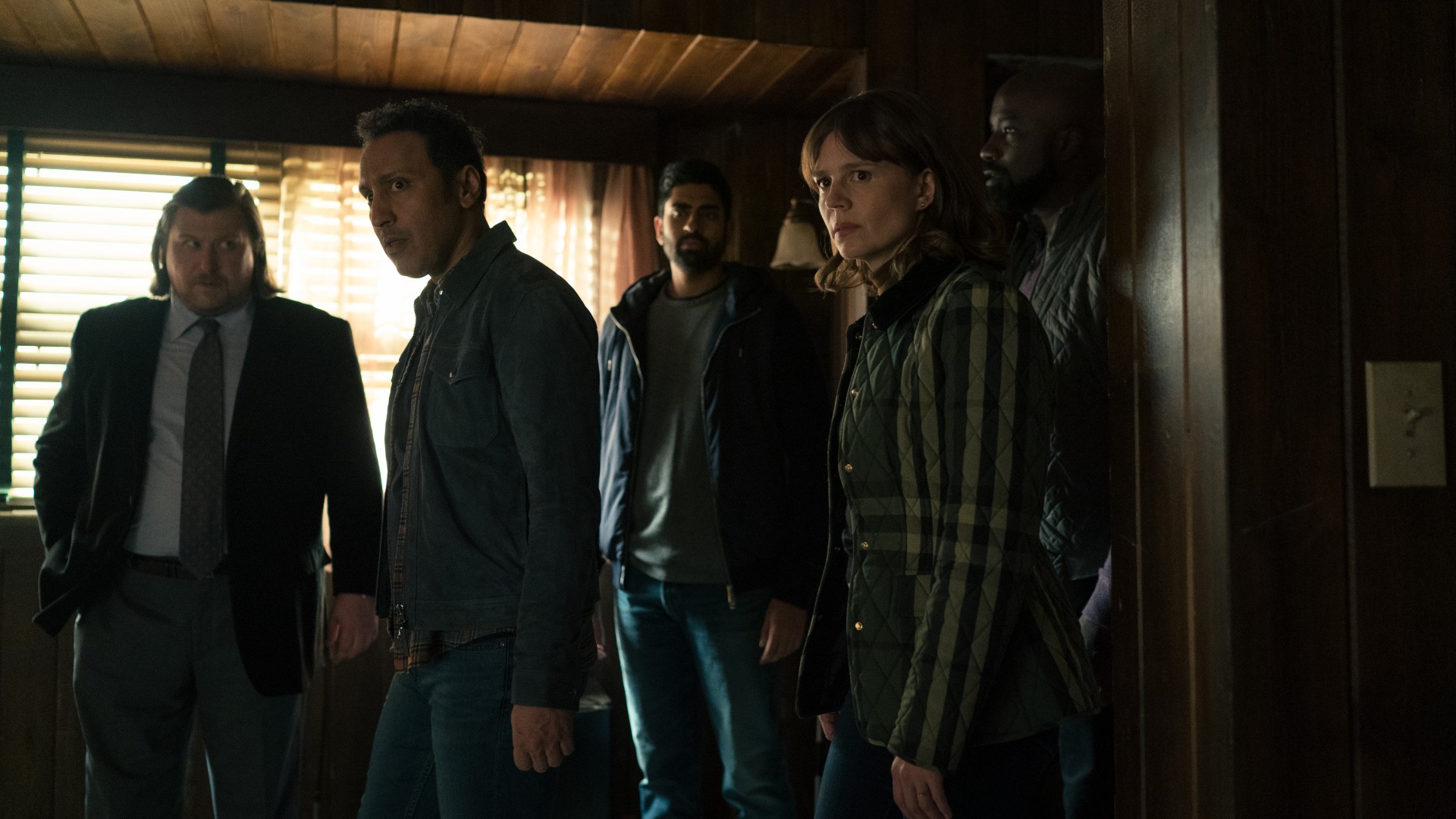 Evil, season 3 episode 7 “The Demon of Cults” is a fully immersive and self-conscious dive into almost everything the series is about. We get the conspiracies, possessions, brainwashing, love bombing, and the promise of a snippet of Sister Andrea’s (Andrea Martin) hair. David (Mike Colter) stands up the entity. Kristen (Katja Herbers) gets an inside look into clandestine operations. Ben(Aasif Mandvi) has his come-to-Jesus moment.

The case starts at a book-signing, the root of all evil. Dr. Paul, an exit counselor with 500 successful interventions under his ever-widening belt, doesn’t believe in things like demonic possession, but has come across a case which scares him silly. Wanna look? The glee with which Dr. Paul invites David and the others to peek in on his ward, Owen, is disconcerting enough to follow anywhere. By the time the team gets to the cheap secluded hotel room where anti-spiritual counseling is taking place, they have to move forward. We can see they don’t like what they are witnessing, but this is a viewers’ choice. The parental consent is frightening, the methods are appalling, the entire scenario is a train wreck. We want to rubberneck.

We also want to know what the danger is about this cult which opened the young man’s soul to possession. Evil does a very insidious thing here: we are so interested in the cult, it comes as a relief after its initial description, and we root for Ben, the magnificent atheist, to get sucked into it. He is separated from the group, entangled in the quantum physics of connection, and primed for slaughter. Not literally, but the audience would accept this as an arc because of how the cult was first presented by the anti-cult people.

Ben even gets a perfect last night on earth; with someone he can relate to. Someone he once flirted with: Jesus herself, and she already beaten him at kitchen appliance bomb-making in the Super Secret Science League. The indoctrinating seduction is set up so well, and Mandvi’s every blink and pause is so believable, any outcome will be thrilling. It is. Viewers will check how much time is left while watching. They will flail themselves in guilt for enjoying Ben’s tortured turnaround.

Dr. Boggs (Kurt Fuller) is feeling a little guilty about the testimony he gave at Sister Andrea’s ecclesiastic review. It is very revealing about his character to admit so openly how much she intimidates him. His takeaway from the demonic encounter, however, is exactly the opposite of what Sister Andrea will tolerate patiently. The two actors dance around the very literal words elegantly but she gives him reason to be intimidated. She offers pamphlets as penance. He picks up a record player because it’s easier to sing along to. The music box is a marvel of simple creeps.

The ritual which Leland (Michael Emerson) sets Dr. Boggs off on is an exciting taste of automatic writing. The two searches at the center of “Demon of Cults” mirror each other. The doctor is being sucked into a path of least resistance, just like Ben is happy to go along on a very friendly journey. Angelic is boring, Leland says, that’s why there are far more translations of Dante’s Inferno than Paradiso. Ben finds a little bit of both, and amused equally by each.

David is still struggling with a double life, and rebels from the outset. He holds himself to a higher standard than the entity, which won’t even call itself by the name. David is so incensed, in the very opening moments, he forgets his priestly constraints, and curses the representative of the high holy church. He does it right inside the church. But it is the response from Victor LeConte (Brian d’Arcy James) which may hold a key clue to a more damning future.

Michelle and Robert King get a kick out of throwing clues to horror classics in order to foreshadow upcoming events, ambiguous as they may be. When Victor mildly reprimands David for swearing in the house of the lord, the restraint and amusement d’Arcy James puts into it is reminiscent of a pivotal scene in Angel Heart. When Johnny Favorite is in counsel with Louis Cyphre (Robert De Niro) in the back pews of a Catholic church, the golden throated detective utters a small blasphemy. This is to the delight of the devilish plot which is enfolding.

When LeConte notes the bad language, he is signaling bad intent, or at least a malevolence beyond the apparent. Much later, when Kristen is shown the elaborate ways in which her family fits into a much larger scheme originating at RMS Fertility, we have to wonder. Just how much of her life has been tracked, and to what extent is she being manipulated. David’s rebellion is a natural response given who he is. He would never agree to endanger a very good friend. The entity would know his predisposition, and it seems like they wanted Kristen on the inside all along. It might be a red herring, but it is one more layer to ponder in a series which loves to peel.

The opening sequence, when David is approached by the entity for a favor, makes its conclusion far more frightening. It feels like a meeting with Deep Throat in All the President’s Men. A secret service, whether it is servicing the government institution or the church, is the elephant in the room, and elephants never forget. Though it’s never said we are now worried about David. Is he a liability to the entity? Evil throws so many underhanded threats into the mix, we never know when or where they will land, but the beauty of it is we are looking for it, whether we realize it or not.

Like Kristen’s Pop Rock Margaritas and Ben’s ultimate conclusion about the lengths people will go for religion, “The Demon of Cults” is a guilty pleasure. It hits all the notes, even the sour ones, with a full appreciation of how they will echo. The episode presents two conclusions, each with an acceptable amount of ambiguity, and still leaves unanswered questions, and hazardous scores to settle.