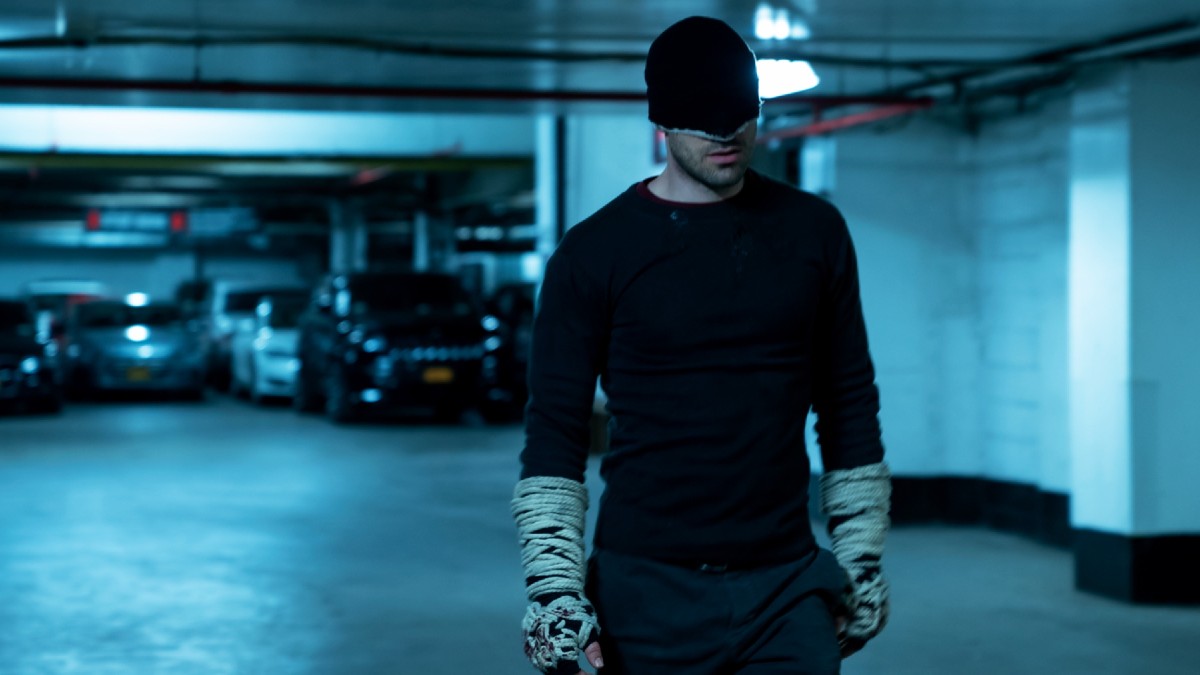 After months of hints and speculation, it has finally been confirmed that Daredevil is back, this time on a different streaming service, Disney+. The original series that ran for three seasons on Netflix starred Charlie Cox as blind lawyer/superhero Matt Murdock and Vincent D’Onofrio as Wilson Fisk, the Kingpin of Crime. The series also featured some of the most savage superhero action this side of Punisher: War Zone. As Cox and D’Onofrio made their way into the far more family-friendly MCU, many assumed that they would have to tone down the violence. But the subtitle of the new series throws that into question.

During the Marvel panel at SDCC, MCU boss Kevin Feige revealed that the 18-episode Daredevil: Born Again will arrive on Disney+ in Spring 2024. For most people, the subtitle simply refers to the fact that Cox is returning to the role after six years. But for comic book readers, the title refers to one of Daredevil’s best stories — and one his bleakest.

Written by Frank Miller, drawn by David Mazzucchelli, lettered by Joe Rosen, and colored by Christie Scheele, “Born Again” covered Daredevil #227–231. The story begins when a drug-addled Karen Page sells Daredevil’s secret identity to the Kingpin in order to get a fix. Using this information, Fisk systematically takes apart Murdock’s life, rendering him homeless, broke, and deeply paranoid. After helping Karen get clean and rededicating himself to justice, Daredevil teams with Captain America to fight the crazed super-soldier Nuke.

Parts of “Born Again” were already used in the first and third seasons of the Netflix series, but there’s still plenty left for the Disney+ show. While Cox already showed up in Spider-Man: No Way Home, and will be in both She-Hulk: Attorney at Law and Echo, we don’t know when he’ll see partners Karen Page and Foggy Nelson again (played by Deborah Ann Woll and Elden Henson on Netflix). Using the “Born Again” story would be a good way to show a new status quo for Matt and to suggest why Karen and Foggy have been missing.

On the other hand, “Born Again” is an incredibly dark story, much more than any we’ve seen in the MCU so far. In addition to the brutal battle between Nuke and Daredevil and Kingpin’s utter ruthlessness, the story forces Matt to question his reason for living, to seriously contemplate suicide and giving up. Even the ending, which sees Murdock finding new resolve, stems from a desire to give up material goods, something far more austere than we’ve seen even by Bruce Banner on the run. “Born Again” pushes Daredevil to darker places than most ever experience.

Disney+ has been pushing its rating boundaries lately, adding the Netflix shows and R-rated movies Logan and Deadpool. And the MCU has long wanted to tell different types of stories, bringing Deadpool into the larger universe. With Born Again, Marvel will get a chance to move toward those desolate places while maintaining connections to Spider-Man, Hawkeye, and other mainline characters.

Quantum Leap Showrunner Has a Secret Plan for Original Star’s Return
Wrath of the Lich King Classic: How Long Does it Take to Reach Level 80?
Did The Rings of Power Just Bring Back a Missing Lord of the Rings Movie Character?
The Walking Dead: The One Big Daryl Change Norman Reedus Asked For
Natalie Jongjaroenlarp guests on Z Nation Season 5 Episode 11 Review & After Show