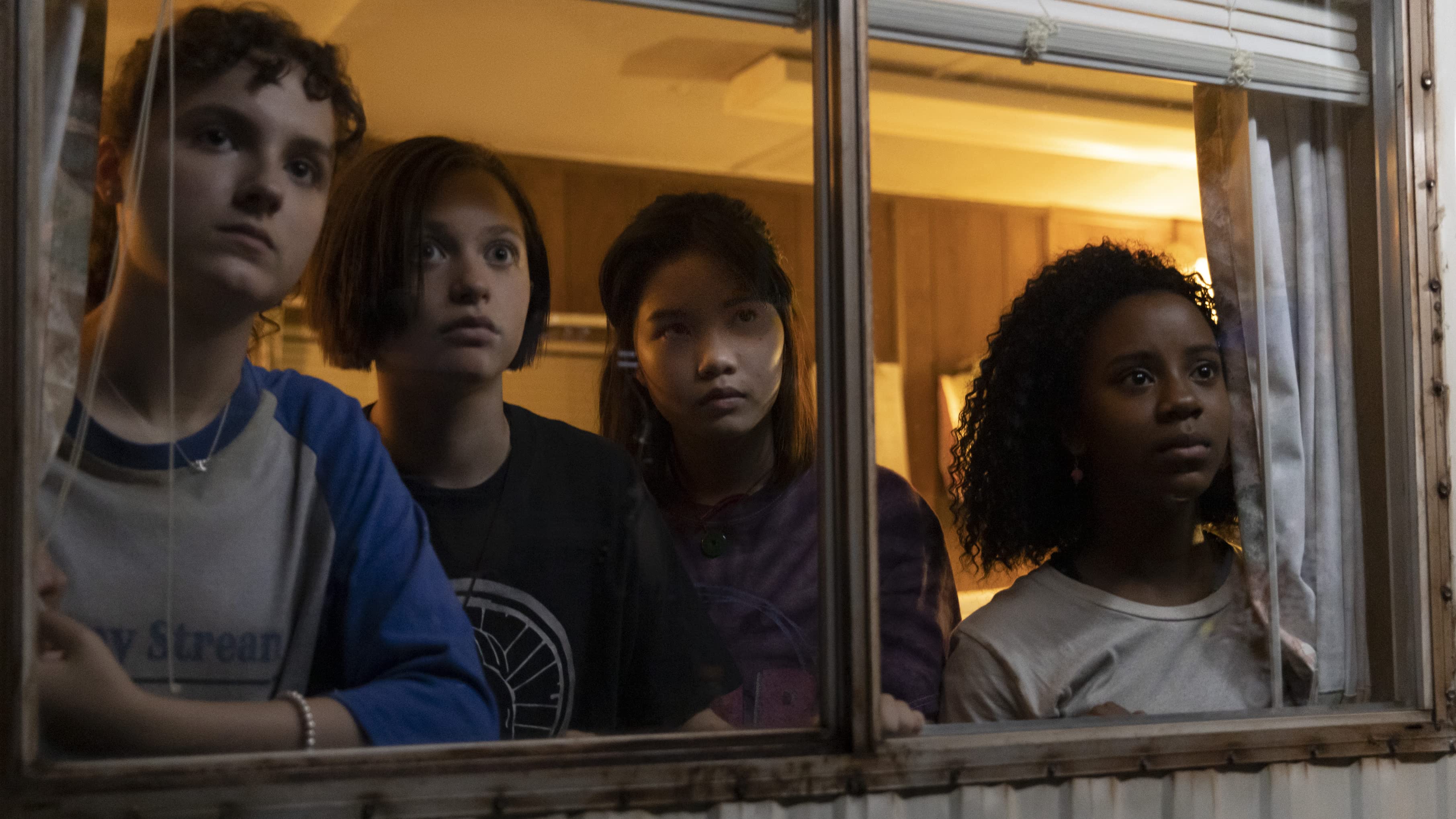 The main thing working against Paper Girls — Amazon’s mostly excellent TV adaptation of Brian K. Vaughan and Cliff Chiang’s multiple Eisner-winning Image Comics series — is Stranger Things. Seeing how both chronicle the adventures of 1980s pre-teens who are unwittingly thrust into supernatural conflicts in which the fate of humanity is at stake, some comparisons are bound to arise. This, combined with the fact that Stranger Things is the hugest thing in genre television in recent memory, means that the negative/most vocal aspects of fandom are right now sharpening their Demogorgon-esque claws to dismiss Paper Girls as a derivative rip-off of the blockbuster series.

Not only would this be wrong but wholly inaccurate, as Paper Girls (the comic of which actually pre-dates the Netflix juggernaut by a year) is its own original entity that shares only the most surface and fleeting similarities with that other Reagan-era series.

A quick rundown of the show’s labyrinthine plot: On Nov. 1, 1988, newbie paper girl Erin (Riley Lai Nelet) finds her first day of work complicated by everything from racist locals to mischief-causing teens in the Cleveland suburb of Stony Stream, Ohio. She is quickly befriended by the tech-savvy Tiffany (Camryn Jones), who in turn introduces her to the neighborhood’s other paper girls: rich girl KJ (Fina Strazza) and abrasive rebel Mac (Sofia Rozinsky).

Together, the four young women find themselves thrust into a time-hopping adventure that sends them into 2019, where they encounter adult versions of Erin and Tiffany (portrayed by the always excellent Ali Wong and Sekai Abenì), as well as separate factions in an eras-spanning war that resulted from the discovery of time travel in which those who dare to exit their own timelines face immediate execution at the hands of the Prioress (an excellent Adina Porter, best known for her role on True Blood) and her superior, the enigmatic Grandfather (Jason Mantzoukas, bringing a sinister edge to his typical humorous scenery-chewing). Together, the girls attempt to stay alive long enough to make it back to their home time.

Given the comic’s dense narrative, one would be forgiven if they thought that the showrunners — including Christopher C. Rogers and creator Stephany Folsom (who left the series during the first season’s production) — wouldn’t dare to add any more material. Audaciously enough, they do just that by introducing the characters of Larry (Nate Corddry), a time operative with his own agenda, and Dylan (Cliff Chamberlin), Mac’s once-hoodlum brother-turned-doctor who is surprised to see his little sister for reasons that are obvious to anyone familiar with the show’s source material. None of this material feels extraneous however, and the additions lead into big comic moments seamlessly.

Humanity was the focus of Brian K. Vaughan’s writing in the comics, and if anything that is only enhanced here. To paraphrase one of the book’s most touching moments, these aren’t just paper girls, they’re friends. Over the course of these initial eight episodes we get to watch their relationships evolve in an honest way. Whether bonding over the shared trauma the characters are experiencing, or dealing with the tumult of puberty (the topic of one’s first period was never been tackled with such candid grace on TV before) or discovering same-sex attraction, Paper Girls always feels genuine. This is no small feat in a story that threatens to overwhelm the viewers with chrono-centric info dumps from, um, time to time.

The theme of what time does to us and our dreams recurs throughout these eight episodes, with the girls having to come face-to-face with the consequences of decisions they have yet to make that have shaped their future selves. It’s a fascinating aspect of the series that implores the viewer to analyze how their 12-year-old self would feel about where they wound up. The ability to generate deep rumination about one’s life is a staple of great science fiction, and it is something that Paper Girls excels at.

Each of the leads get an opportunity to take center stage here, and it’s easy to imagine how much of an inspiration these characters will become to young viewers who will find a way to sneakily watch the series despite its realistic use of profanity and at times surprising violence. The performances are across the board excellent, marking the latest casting coup of unknowns from Amazon. (Expect Paper Girls to be the group costume this Halloween if the show takes off).

Also of note is how the series replicates colorist Matt Wilson’s neon-drenched aesthetic from the comic, rich with the pinks of a sky at twilight. This series often looks stunning, especially in the second half of the season which more than makes up for the bottle show feel of the initial outings. (There’s a surprisingly cheapness to the first two episodes that is quickly forgotten once the narrative starts bringing to life some of the comic’s literally huge moments as the story progresses).

Less successful is the stiff direction of the pilot, an hour of television that has the burden of introducing our characters and throwing them into a conflict. Unfortunately, the debut episode is the weakest of the bunch, somehow anchored by both too much exposition and a lack of explanation as to what the hell is happening. One wonders how those unfamiliar with the Paper Girls saga will respond to this initial outing and its shortcomings.

To be clear though, stick around, by the time episode three rolls forward the show has completely found itself. Amazon is wise to roll out all of the installments at once, as this is a series that binging benefits greatly due to the dense nature of the material and rapid plotting as it approaches a stunning cliffhanger.

Those tuning in expecting pop culture references a la the previously mentioned Stranger Things might be a bit disappointed as Paper Girls is way more interested in setting up its own detailed mythology. That said, there are some “Running Up That Hill”-esque needle drops here and subtle homages to everything from Flight of the Navigator to Terminator 2: Judgment Day.

Despite some slight shortcomings, Paper Girls is a series that manages to be a satisfying adaptation of its printed self while also taking the story to bold new places. You can expect to see lots of folks saying that Paper Girls delivers in the days ahead, and you know what? Cliched though it may be, that declaration is true. This is a series that deserves to be as beloved as Stranger Things. It is certainly as great.

All eight episodes of Paper Girls are available to stream on Prime Video now.