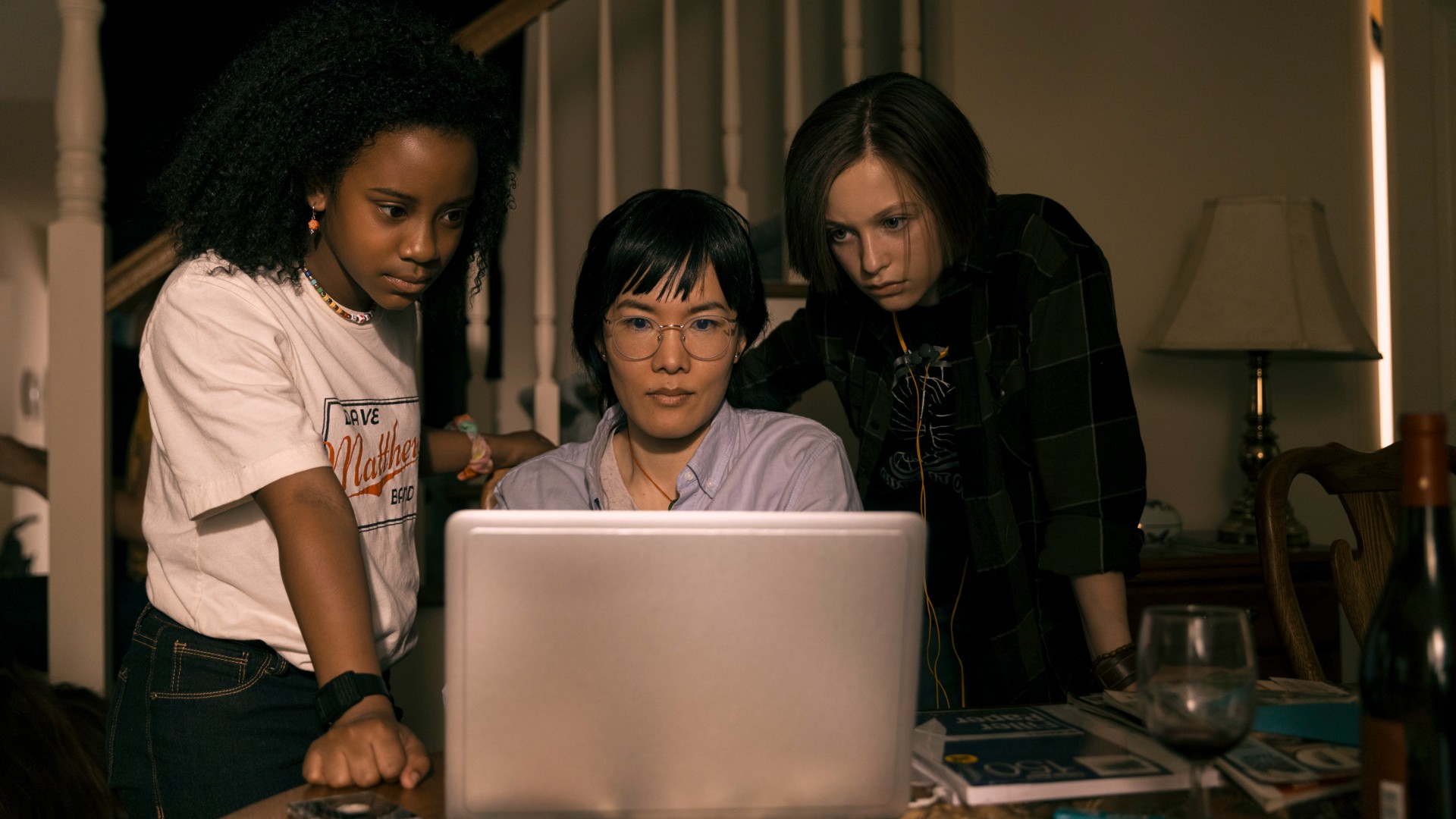 With the first season of Paper Girls currently airing, binge-watchers everywhere find themselves curious about where the story will go next if the series is renewed by Amazon for a second season. (Which feels more than likely given the buzz the show is generating). Seeing how the show diverges from the comics it was based on, much of what you are about to read is timey wimey speculation. That said, we’ve taken a look at both the source material and the seeds planted by the initial eight episodes to see what the future — or the past — will hold for KJ, Mac, Tiffany and Erin.

Tiffany and Erin Do The Time Warp Again

In the first season finale, Tiffany and Erin have escaped from the Old Watch’s time ship with the help of the (seemingly doomed) Prioress. They journey through a folding and land in Larry’s farm, but there’s no sign of Mac and KJ. Hearing some noises nearby they stumble into a drive-in theater that is showing the Burt Reynolds’ football comedy The Longest Yard. Unfortunately for the duo, they aren’t in a retro drive-in but have in fact landed in 1974…roughly two years before they were even born. (A fact substantiated by the makes and models of the cars in the parking lot). A potential second season will show Tiffany and Erin struggling to get back to their own era, a goal that they will need the help of someone from the STF Underground of the Old Watch to achieve.

When last we see KJ and Mac, they are in a capsule that will send them back through a folding into 1988. Or will it? Seeing how the Prioress went from being the series’ primary antagonist to apparently on the side of our leads, she could be tricking them by sending them to some other time period. (Although then again her sudden behavioral change could just be bad writing). If the pair do in fact wind up in their timeline they will try their best to be reunited with Erin and Tiffany…a goal that they will have to pair up with someone from the Old Watch or the STF to achieve.

Adina Porter imbues the Prioress with equal parts charm and menace. We know hardly anything about the character other than she unwittingly became part of the war between The Old Watch and the STF Underground. The Prioress also seems to have an admiration for the brilliance of Tiffany, who apparently helped invent time travel at some point. (Although the Prioress’ actions in the finale seem to be influenced by directly undoing this). “I believe the future can be what we make it,” she declares, unwilling to accept fate or any pre-destination paradoxes. Although on death’s door the last time we see her, she could just be playacting in order to trick Grandfather. There is still so much we don’t know about her — for example, what’s up with her changing attitude towards KJ following her brother’s death at the youth’s hands? — so there’s plenty of story potential here. Any second season could see the Prioress trying to destroy the Old Watch from within while also trying to invent Tiffany from making time travel a reality.

Mac’s cancer is a huge narrative thread in both the comic and television versions of Paper Girls. She seems doomed by the disease, and despite all the time-hopping she endures it remains untreatable. Although something tells me that the television writers may take a less bleak route and find her a cure.

KJ watching her future self kiss her college boyfriend is a graceful portrayal of the confusion and exhilaration of the coming out process. Mac seems like she is figuring herself out too, and this theme will carry on through the remainder of the series just as it did the comics.

The STF vs. The Old Watch

The lines between good and bad blur when it comes to the war between the STF and the Old Watch as both sides feel that they are in the right. There’s is a battle of ideology as much as a literal journey through the ages, and one that demands to be explored more because as it stands now neither side seems particularly great or noble. Larry is no hero, but he’s not a sandal-and-socked jerk like Grandfather either.

What are each group’s ultimate goals? How exactly did their battle begin? What is Grandfather’s deal and why is he in charge? These are questions that must be answered in future installments.

The Old Watch are apparently a bunch of hypocrites. For all of their talk of destroying the mix tape of the universe they also employ a pterodactyl as a pet/hench-dinosaur. This is super cool, because it means we will hopefully see more fantastic dino-related deaths in the future. Even if it doesn’t make a hell of a lot of sense story-wise.

In the season finale, the Prioress namechecks Dr. Joan Braunstein as one of the individuals who worked with Tiffany to event time travel. The comic introduces you to the doc in its third story arc, a prehistoric yarn which drops the bombshell that interfering with the past “fucks with the very fabric of reality.” But can she be trusted by the girls?

The longer Paper Girls runs, the more chance we’ll have to see some of the comics truly out there moments on screen (such as giant tardigrades, more robots, a future where the Y2K bug wreaked havoc, etc.) brought to life. With the series picking and choosing elements from the original work to choose from, and also creating its own unique stories, it will be interested to see how this saga — which had a tight 30 episode run with a definitive ending — plays out. So hopefully we will have more Paper Girls to look forward to…