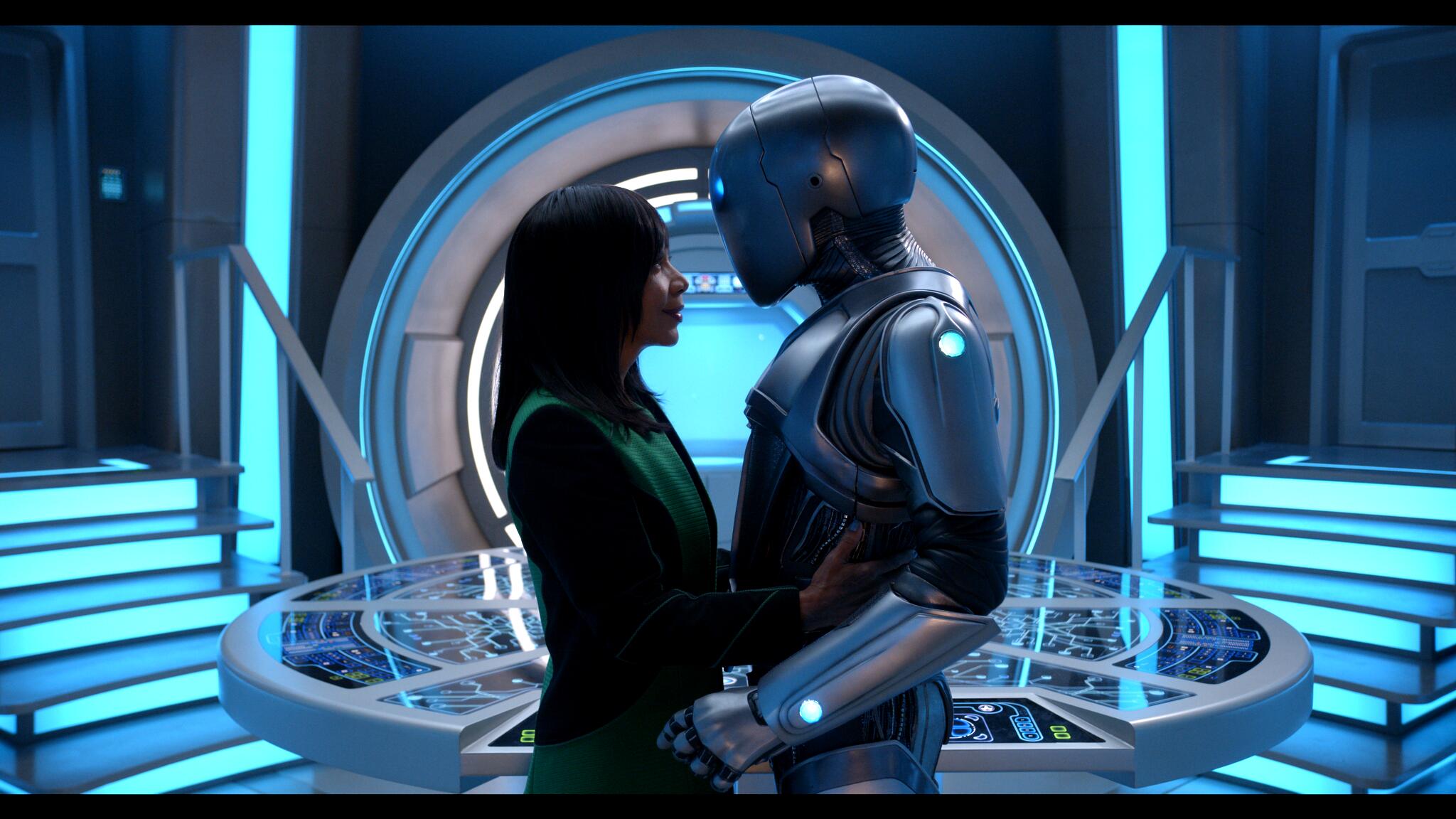 This review of The Orville: New Horizons contains spoilers.

The episode title “Future Unknown” represents so many aspects of what is occurring both on and off screen within the Orville universe. Most notably, the show is still awaiting word on an official renewal from Hulu and parent-company Disney. Yes, fans want to know about their beloved show, and what is going to happen in our reality, but within the fictional reality of the series, there’s much to deal with as well.

After last week’s universe-shaking episode, “Domino,” there was a major shift in the dynamic of the overall story. An uneasy peace was reached with the Kaylon, the Union found themselves up against a new antagonistic alliance, and most importantly: we lost spitfire Ensign Charly Burke when she sacrificed herself to save the Kaylon race and, in turn, foster that aforementioned fragile truce.

Sadly, it would seem that the writer and director of this finale, Seth MacFarlane himself, could not really follow “Domino” with anything as exciting or dynamic as that penultimate installment, and in a lot of senses, he should not be completely blamed for that. “Future Unknown” is predominantly about how Isaac (Mark Jackson) proposes to Doctor Claire Finn (Penny Johnson Jerald), and how their marriage could possibly function going forward. Their relationship has been a long running thread throughout the entire show’s run, and there is something very comforting about seeing how it has progressed.

There have often been comparisons to the show that inspired The Orville in the first place: Star Trek: The Next Generation, and Isaac can easily be compared to the iconic Data, played by Brent Spiner. However, the writers of The Orville should be applauded for not turning away from this romantic storyline when it could have died many times over, simply because it pushed the relationship into unfamiliar territory. This is something TNG writers never tried – to have a human and an artificial lifeform actually married is new territory, and both the actors and the writers do well to give the emotionless Isaac moments of real connectivity and make the relationship worthwhile enough for viewers.

Issac’s desire to be with the Finn family long after Claire is gone is strangely sweet, despite perhaps the heartbreaking implications of her mortality and Isaac living forever. Penny Johnson Jerald and Mark Jackson should both be acknowledged for their layered (and very different) performances, and for keeping this storyline interesting, at least enough. If the show is to continue, this is a well that the writing team can drink from as often as they would like.

That is, as long as they are willing to keep pushing the boundaries of this unconventional romance. With “Future Unknown”, there is only just enough interest to keep viewers’ attention. The intrigue of the Isaac/Claire relationship, and how their “future is unknown” is understandably a story worth watching, but it also certainly doesn’t challenge viewers at this point, which is something the show hasn’t been afraid to do for the most part this season. If it is to be revisited in the future, a better balance in regards to how often audiences get an Isaac/Claire story needs to be found.

Most of “Future Unknown” is wedding preparations, which leads to several humorous exchanges, but quickly becomes overplayed. Granted, Isaac getting terrible advice from John LaMaar (J Lee) only to have Claire confront John is fantastic. But then the humor with Bortus (Peter Macon) hijacking the best man duties from Malloy (Scott Grimes) is only chuckle-inducing at best, and falls flat at times. MacFarlane tried to make this a much lighter episode and embrace the humor the show was known for in its infancy, but sadly, the humor often felt… simply infantile. However if a pole-dancing Kaylon with tassels on his robotic nipples is your idea of funny, then this episode was undoubtedly entertaining, and so achieved its goal of irreverence.

Interspersed with all the awkward jokes is another callback to the first season’s “Majority Rule”, and with it comes this episode’s strongest plot thread. Lysella (Giorgia Whigham) somehow calls The Orville from her home planet, Sargus 4, still rife with the metaphorical latent governing system which judges people based on a social media type platform. Lysella tells Mercer (MacFarlane) and Commander Grayson (Adiranne Palicki) that things have not gotten any better on her planet, and she’s had friends who have been publicly executed based on this ridiculous system. She seeks asylum, and is granted it after Mercer and Grayson quickly discuss the issue.

This subplot is the only subtextual element of “Future Unknown,” which has certainly been one of this season’s strengths when it comes to the writing. As Grayson takes it upon herself to acclimate Lysella to the Union’s way of life, Lysella, representing our own 21st century ideals, has a tough time grappling with her new utopian reality. It was yet another great example of how MacFarlane, a massive TNG fan, pushed the concepts of that show even further, and tried something new. There was always the Prime Directive in Star Trek: the steadfast rule that you do not interfere with a developing planet or culture, but it was never shown so explicitly as it was in “Future Unknown”.

Lysella, seemingly changing her mind and wanting to return home at one point, was merely using her supposed change of heart as a ruse to steal advanced Union technology blueprints. When she is inevitably caught, Grayson takes her to the simulator to show her Gendal 3, an industrialized planet not unlike Sargus 4, and therefore not unlike our own. Grayson tells Lysella about the early days when the Union were more akin to mercenaries, openly sharing their technology, even if the culture was not ready.

She quickly advances the simulator five years to the future where the planet is all but desolate, save the sudden appearance of a random mutated Gendalian responsible for a genuine jumpscare in what was assumed to be a calming episode. Audiences see first hand what can happen when a culture is given tools without earning them, or without developing the responsibility to use them, something that Star Trek rarely touches on so vividly. Once again, “Future Unknown” is a clear allegory about how our world needs to get it together and begin advancing in productive ways, and how the fate of humanity itself is up in the air.

Without this subplot, the episode would have felt far too light, perhaps even vapid. Lysella’s story was certainly a welcome Roddenberry-esque parable that fit seamlessly with the rest of the season, and yet it is also understandable why MacFarlane leaned in the direction of light-heartedness. While the humor and wedding plot was certainly not the episode’s strength, it had to be done.

The final meaning of “Future Unknown” plainly relates to the fate of the show itself. No one at this point knows what the future holds for The Orville: New Horizons, as the audience and the show creators are both in the dark until Disney officially renews the show. What that ultimately did for this finale is put MacFarlane, as both writer and director, in a tough situation. The show has to serve two purposes: be a season finale, and yet, on the off chance the show is not renewed, everyone has to be at least mildly satisfied if this were to be the series finale.

It also puts this review in a new situation. Can the show be judged on its fan service moments, attempts at humor, or a story line that doesn’t really offer any conflict or challenge? Is it unfair to compare it to last week’s episode that was arguably one of the strongest of the entire run of the show? If the show was renewed, would “Domino” have been the season finale instead?

It is almost as if you have to approach this episode much like Dr. Schrödinger would have with his cat. Due to its strange mix and the situation the show finds itself in, “Future Unknown” justifiably, feels like a mixed bag. There are genuine laughs, the fan service is occasionally fun, including a return of Alara (Halston Sage) which was one of the most gleeful moments of the season, and yet, perhaps with the future being truly unknown, there’s an uncertainty in regards to how to appreciate this episode. If there is a season four, “Future Unknown” merely feels like a placeholder. If it is the last episode fans will ever see, it certainly gave everyone enough sickly sweet moments that felt like a warm hug goodbye to the Orville family. It simply won’t be known until the future unfolds.

The Last of Us HBO Series Trailer Reveals Nightmarish Clicker Designs
House of the Dragon’s Own Long Dark Night Re-Introduces a Game of Thrones Issue
The Walking Dead Season 10 Episode 12 | AfterBuzz TV
Taskmaster: Ranking Every Series From Merely Quite Good to Ludicrous Best
GamesMaster: Before YouTube and Twitch, Sir Patrick Moore’s Floating Cyborg Head Was the Best in Gaming TV