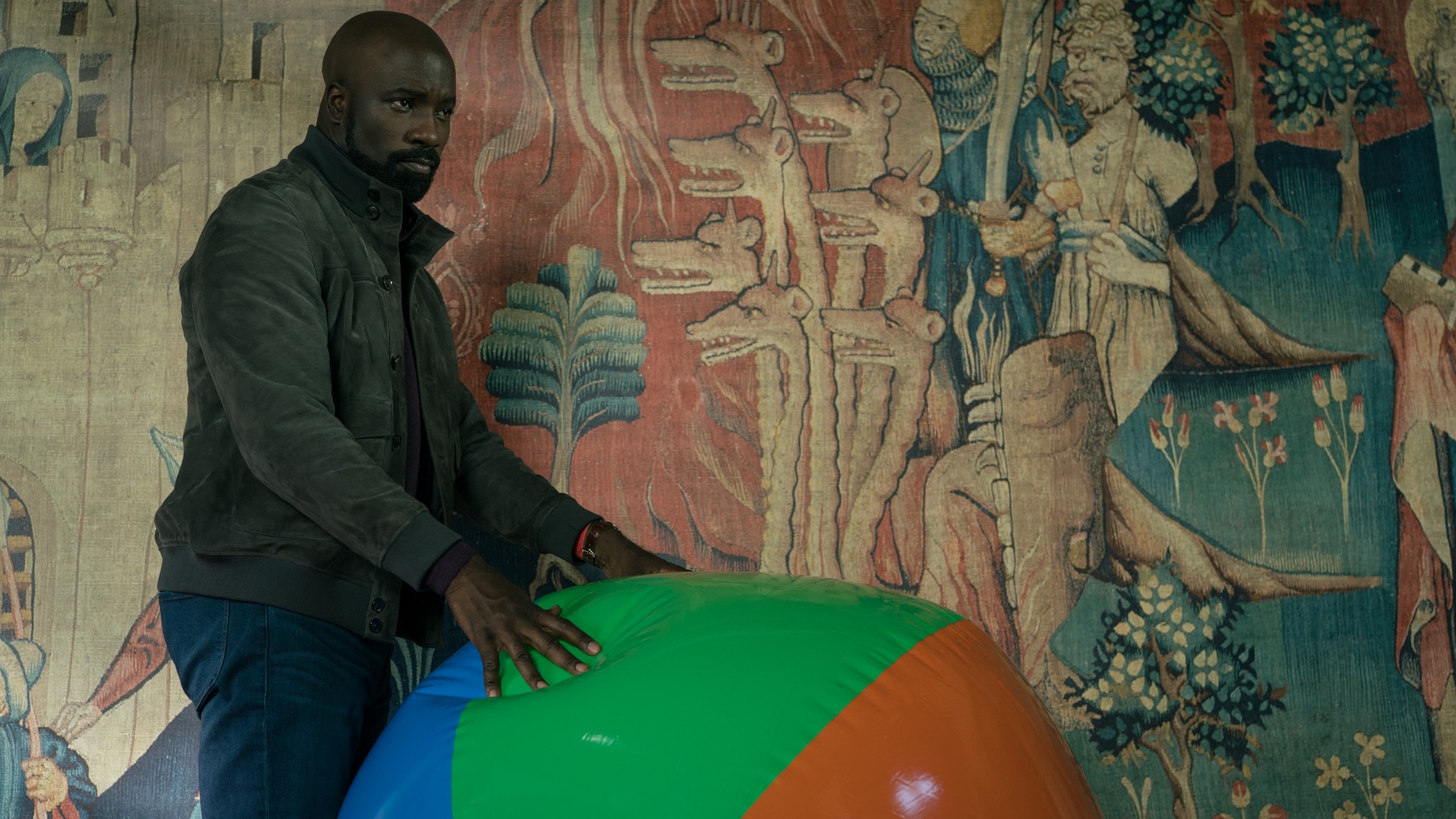 Evil, season 3 episode 9 “The Demon of Money” is an installment in motion. It begins in the therapeutic aftermath of a horrific incident and ends on a stunning, violent cliffhanger at the cost of a regular character, who we appreciate far more after the sacrifice.

The episode begins in Dr. Boggs’ (Kurt Fuller) office, where Kristen (Katja Herbers) is having a session on the traumatic scene she witnessed at the end of “The Demon of Parenthood.” All the audience saw of that grisly outcome was Kristen’s reaction to it, and that was enough to supply the terror to the ghastly horrors out of view. “The Demon of Money” supplies several reaction shots, often in tangent with the gore, which are as effective at pushing buttons as any of the frightening images.

It is very satisfying to see Kristen deal with the events of the previous installment, providing instant answers, and offering an opportunity to delve deep into her psyche, something which the character hides under layers of subterfuge and outward good will. The audience has observed Kristen grow darker as Evil has progressed, but to hear her admit she felt the destroyed fetus was a part of her, and the shame at the relief she felt when the situation came to its brutal conclusion, is a relief. Kristen also admits she may find herself relieved if her husband Andy (Patrick Brammall) doesn’t return from Tibet.

Kristen’s admissions confirm the suppositions the audience has been making, and color the entire episode with foreshadowing. Everyone is swimming in a downward current. Even Dr. Boggs is at a crossroads usually reserved for blues musicians looking for the perfect guitar lick. The hellhound on Dr. Boggs’ trail sings in French, and makes him cut his hand while shaving, which somehow sounds naughty. Even the murder Kristen witnessed, a fetus being torn from the mother by the father, is mirrored in the case the team investigates when stockholders rip out body parts to pay back the interest.

Evil likes giving an illusion that incidents come together by chance, and in “The Demon of Money” all the disparate elements assemble like the monster in Dr. Boggs’ book may, and converge into a pincer by the time it bleeds out. The monster-of-the-week is a fiduciary concern, a shadowy figure which haunts and taunts anyone who makes money off a certain stock. The company is called DF and its logo matches the sigil of one of the unholy families. The mystic Grace Ling (Li Jun Li) fills in missing pieces of the demonic family tree after meeting Kristen’s mom Sheryl (Christine Lahti) at a family gathering, which leads to the vaguely unforeseen events of the climax and Monsignor Matthew Korecki’s (Boris McGiver).

The monster of the week case itself gets familial. Ben (Aasif Mandvi) calls in his sister, Karima (Sohina Sidhu), for an appraisal and inadvertently brings her into the curse. It is fairly obvious she’s going to do the day trade from the moment we learn she has a portfolio, so it comes as no real shock when the dividends try to reap her. The DF case is interestingly covered. We see the team do the legwork, interviewing victims, chasing leads, comparing video captures, but Grace gives the crucial piece to the puzzle.

A pen with a sigil leads to the initial stockholder, who brings a collective gasp from the team. The makeup effects are very realistic, quite horrifying, and cringeworthy, but it is the pained looks on the faces of the interrogators which provide the atmosphere.

Ben gets solo reaction shots when he is being stalked by the murky DF collection agent, and when the young investor is chased off his yacht, Top of the World, in the middle of the night. Kristen is at her most discerning when she points out “The Ring is not a B-movie,” and at her most astute when she finds the perfect solution for the dicey stock tips. A forensic psychology pro for the team, her true expertise is in revenge.

Father David’s (Mike Colter) relationship with Grace Ling is vastly different than it is with Sister Andrea (Andrea Martin). Both spiritual visionaries, however, share a similar commitment. Ling throws herself into the priest’s caring arms and general concerns with full trust, and no doubts. David is the one resolve she has in an environment completely out of her control. Colter brings a touch of mirth to each encounter, allowing David to self-consciously enjoy such a deep and personal connection with an almost exalted being. It is also somewhat encouraging that after Victor LeConte (Brian d’Arcy James) backs David’s appeal for Grace’s personal space, the rest of the assembled holy men show him the respect of seeking his counsel.

David actively worries, and more so about the person than the mystic, but is also privately pleased. At the very least it brings a kind of contentment which Colter and Li Jun Li get to color in and outside the lines. Their best moment is when they are kicking an inflatable ball at each other. It is obviously a silent scream for help from the trapped true mystic, but it also very funny and extremely human.

The concluding cliffhanger culminates into an informational catharsis for viewers. Everyone appears to be out in the open, uncovered for who they are and what sides they ultimately land. Dr. Leland Townsend (Michael Emerson) truly comes into his own as he strikes a multitude of monstrously iconic poses on his trip up the slate stone stairs on his way to (unsuccessfully) kill Grace. The segment is as suspenseful, chilling, and action-packed as any yet offered on the series. It also contains a true casualty in the ongoing happenings of the show, and the cases themselves.

Evil has previously bid adieu to one of the team’s church handlers when Bishop Thomas Marx left the series (played by Peter Scolari, who passed away in 2021). But never has a departure of an ally been quite so violent as the Monsignor’s murder. The subdued frantic build of the scene also benefits from the lightness of the preceding scene, where Kristen pays the cursed stock tip forward to the asshole YouTube bully. The biggest scares come after laughs.

Written by Nialla LeBouef, and directed by Yap Fong Yee, “The Demon of Money” is a risky investment with an astounding dramatic payout. Evil allows the overall strategy of its philosophical and spiritual namesake to play out in elusive shadows. Now it appears the covers have been pulled off and the game forfeited, but it is in motion. Money is the root of all evil, a major character was pruned, and the rot was exposed. It leaves the season finale open for a structural closure of several arcs, but the series prefers to paint itself into a corner before breaks.