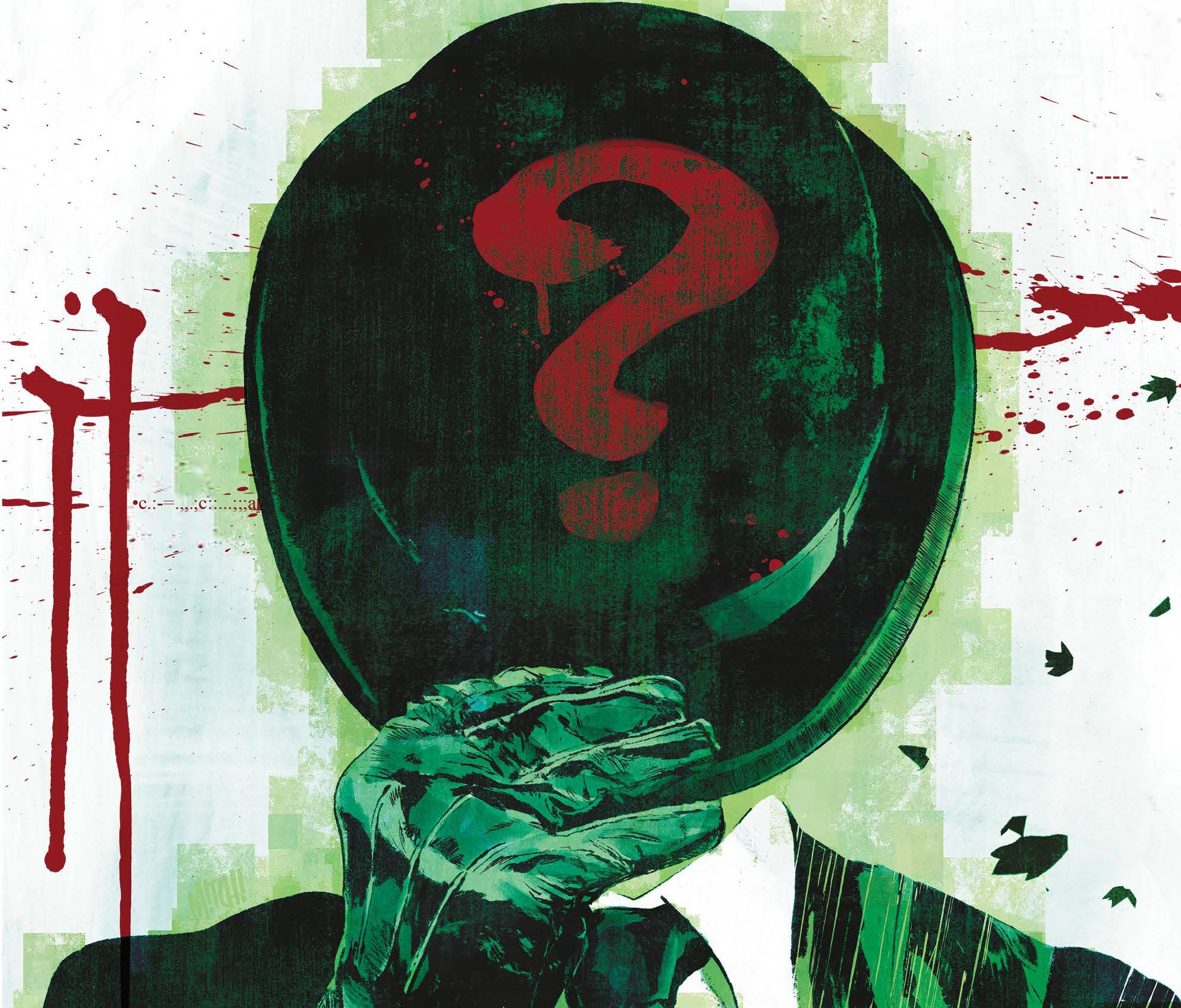 The Riddler is truly having a moment. One could argue that the character hasn’t truly held the imagination of the public since 1966, when the first season of the Batman TV series premiered, and the nation was gripped by a wave of what was dubbed “Batmania.” A character who had, to that point, only appeared in two comic stories suddenly became one of the most recognizable supervillains in the world, thanks in no small part to Frank Gorshin’s inimitable performance.

Of course, that Riddler was a (mostly) non-lethal mischief maker. A giggling livewire whose menace was overshadowed by his manic energy, ridiculous schemes, and a compulsion to leave outsized clues that allowed Batman and Robin to capture him. There have been many Riddler stories in the pages of DC Comics since, a multitude of animated series episodes, more live action performances…but none have managed to get out from under Gorshin’s lithe, spandexed shadow.

Until recently, that is. The Batman featured Paul Dano in a haunting, brutal, Zodiac Killer-inspired take on the character. And now DC has found a way to make the Riddler even more unsettling on the page than he’s ever been on the screen, with the newly-released Batman: One Bad Day – The Riddler, by Tom King and Mitch Gerads. The first of a series of villain-centric one-shots, that “One Bad Day” refers to a line of dialogue the Joker delivers in Alan Moore and Brian Bolland’s classic, The Killing Joke, and King and Gerads were tasked with delivering a Riddler story that would redefine the Gotham villain just as surely as that earlier tale did for the Clown Prince of Crime.

“I remember reading The Killing Joke as an 11 year old,” Tom King says. “My older brother bought the copy because I wasn’t allowed to read that, so I’d sneak into his room. It was the first comic that ever scared me. Not only that, but it changed how we saw the Joker.”

But in order to change how people see the Riddler, the creative team had to take a look at everything from his origin story to his costume.

“He’s my favorite Batman villain and I’ve always thought he looks like a total dope,” Gerads says. “I was never a fan of the huge muttonchops and the various ways he’s been done. But the versions of him that I have loved are the animated versions. I feel like Batman: The Animated Series was the touchstone for our entire generation of Batman fans. I really liked the animated suit with the bowler hat and the purple mask. But then [in more projects] like Harley Quinn, he’s a bald guy with eye makeup. He’s not as sexy as he is in the modern comics. He’s this sallow, creepy looking guy. So I kind of ran with that because that always just struck me watching those things. It was the perfect time to bring that in, both thematically with what happens in the story and how he now views his role in Gotham and in the world.”

However, there was one obstacle to creating a definitive Riddler story: the inherent simplicity (some might say silliness) of the character’s classic origin, first told in 1948’s Detective Comics #140.

“The Joker’s origin, it has that Red Hood element, it has the falling in the vat of acid. It has some coolness, some weight to it,” King says. “The Riddler’s origin story, not as much. He’s had a few origin stories over the years [like] Jim Carey with a mixer on his head or in the cartoon, where he’s a programmer who just is really bad at his job. But in the actual comic books, in continuity, his origin, if you look it up in Wikipedia to this day, is at some point he cheated on a test and then decided to become the Riddler. That is the worst origin story of any super villain ever. And that hasn’t been fixed in 70 years.”

Of course, in Batman: One Bad Day – The Riddler, to some extent, that is still the character’s origin story, albeit with a far more horrific and shocking undertone.

“We had to somehow take just that small fact of, how does cheating on a test lead you to change your life to make it about riddles and, and doing this thing where every time you commit a crime you want someone to catch you,” King says. “Because the Riddler could get away with his crimes. That could be the easiest thing ever, but he always leaves something behind and then Batman finds him and that’s every single Riddler story. Why does that come from cheating on a test? And why in this does he finally evolve beyond that?”

The answer is both shocking and horrifying, and we won’t spoil it here, but needless to say, it takes that very first Riddler story and adds unsettling new layers to it. Check it out in Batman: One Bad Day – The Riddler.