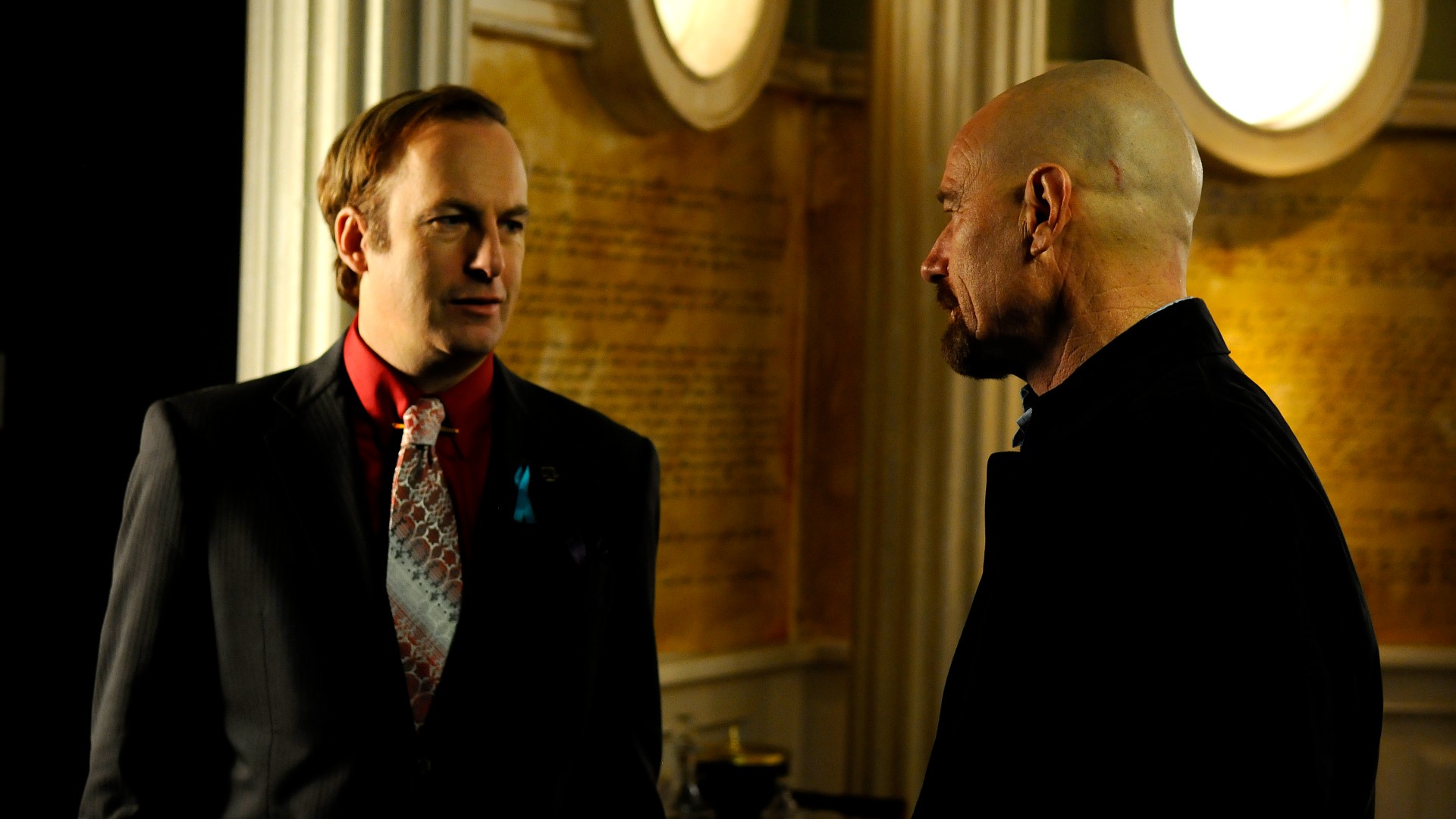 With the conclusion of Better Call Saul’s final season, it looks like audiences around the world have to accept that Vince Gilligan’s New Mexico meth-verse has come to a close. With more than 120 episodes between Breaking Bad and its prequel series, we’ve been treated to some of the greatest televised entertainment ever produced. Not many thought that this creative team could make a spinoff series that would rival the original in just about every measurable category, but that’s exactly what happened.

All of this means we can finally do a comprehensive break-down to decide which show is the better overall product. From the uncanny acting ability of Bryan Cranston and Bob Odenkirk, to the pristine neo-Western style of the cinematography, a lot of factors will sway our decision. The one thing we know for sure is that we will be hard pressed to ever be treated to multiple series in the same universe that are this incredibly crafted ever again. This fight should require more bouts than two middle-aged lawyers’ petty boxing matches. Let’s get started!

Both of these shows feature monster performances by their lead actors. Walter White and Jesse Pinkman (Bryan Cranston and Aaron Paul) are a TV duo so iconic that they now have their own statues in Albuquerque. They have an aura that hangs over this entire universe, and it’s hard to match. The main reason they are now legends of the medium is because the two actors playing the roles had such immeasurable chemistry.

Every time Walt and Jesse are on screen, they pull back a new layer of their characters for the audience to contend with. Cranston and Paul bounce off of one another with emphatic intensity. The wit and sarcasm comes in droves, the hardcore emotional moments break our hearts, and the many different phases of their relationship are played with poignance and a deft attention to each character’s place in each other’s lives.

If you watched Better Call Saul, you would know this sounds pretty familiar, right? Jimmy McGill and Kim Wexler (Bob Odenkirk and Rhea Seehorn) are equally tethered together. Their love story is one that will never be replicated any time soon. Both characters bring out the best and worst qualities in each other, and we root for both of them the same way we did for Walt and Jesse.

So if we’ve decided that Walt/Jesse and Jimmy/Kim is a draw, it comes down to the supporting roles. Breaking Bad and Better Call Saul share many of the same tertiary players. Gus Fring and Mike Ehrmantraut (Giancarlo Esposito and Jonathan Banks) were introduced as tremendous antagonists in the original show, but the prequel series fleshed them out in ways we never got to see before.

This gave both Banks and Esposito room to maneuver their characters in revelatory ways, grounding them as humans rather than just drug dealers. Mike’s trauma as a Philadelphia cop and Gus’s sexuality are just two of the areas that were never fully touched upon before Better Call Saul.

Breaking Bad deserves tremendous credit for two of their supporting characters that don’t factor into the successive series. Hank Schrader and Skyler White (Dean Norris and Anna Gunn) are fascinating individuals who play as opposition to Walter. As they become more and more important to the outcome of the plot, and we get to see some of their motivations and their struggles, we feel them trying to become their own characters outside of Walt’s world.

It would have been nice for Gilligan to explore that section of his show the way Better Call Saul does with Mike and Gus, as well as Chuck McGill and the tragic Howard Hamlin (Michael McKean and Patrick Fabian). It is in this plethora of mesmerizing performances that Better Call Saul takes a slight edge over Breaking Bad in acting and character work. Almost everyone revolves around the Walter and Jesse sun in Breaking Bad, but the other characters in Better Call Saul are their own solar systems. They don’t need to be planets orbiting Jimmy to be interesting or to matter.

The experience of watching these two shows is so much different than viewing a typical crime drama. The look and feel of Vince Gilligan and Peter Gould’s world is entrancing and engrossing at a level that might have never never been matched on television. The way we perceive these stories is able to change because of how the camera is positioned, but it’s never distracting. It’s like when an author uses a specific type of language technique to get the point across.

There are several signature filmmaking techniques that have made both programs arguably the best-shot shows in history. Both shows love to use object POV shots and wide angle perspectives. The object POV does a fantastic job of immersing you into the setting. When Walter White is looking into his stash of drug money, putting the camera inside the safe as if Walt is looking at the viewer is absorbing. It allows an abstract plot line to feel like it’s in our living room.

The wide angle shots do the reverse. They demonstrate that a scene is just one piece of a broader puzzle. They often relax the viewer, or make the morbid feel more mundane. The best example of this in Better Call Saul is when Mike executes Werner Ziegler in the fourth season finale, “Winner”.

This is a devastating turning point in Mike’s life. The eerie wide-angle makes us able to dissociate with the hefitness of the murder. These filmmaking abilities are what make these shows true works of art. The directors and the cinematographers are painting a picture of their story; they are showing instead of telling.

It feels almost unfair to choose one as being superior in this category, but we’ll go with Better Call Saul by a millimeter. For the most part, the same people worked on both shows, and they upped their game just a little bit more in the prequel series. The artistic endeavors are slightly more refined. The montages are crystal clear and expository. Special props for the choice to shoot the majority of the final four episodes in a black and white filter and have it serve the story perfectly.

It’s like when Michael Jordan and the Chicago Bulls won 73 games in the 1996 NBA season. Absolute masters of their profession giving their magnum opus.

One of the unfortunate things about being on AMC instead of a network like HBO is that Vince Gilligan and Peter Gould may not have gotten as much creative liberty in choosing the music for their shows as perhaps someone like David Chase on The Sopranos. It’s pricey and arduous to work through the rights to use someone else’s songs, and the result is that the sound department milked every last drop out of the tunes they chose.

Both shows feature pieces that complement the action on-screen perfectly. Frank Sinatra’s “Something Stupid” has become a requiem for Jimmy and Kim’s relationship. Breaking Bad has what seems like an entire album of meth anthems that corroborate Walter White’s love for the drug, such as “Crystal Blue Persuasion” and “Baby Blue”.

But it’s one scene’s gravity in Breaking Bad that separates it from Better Call Saul in this category. The moment when Walter finds out that Skyler has taken all of his fortune and given it to her boss, Ted Beneke (Christopher Cousins), is something that rivals anything in a Jordan Peele horror film.

The background percussion echoes the audiences’ heartbeats. It’s an unbearable climax to four seasons of tension, and the sound design is what makes the entire thing work.

Breaking Bad’s final season is an unrivaled juggernaut, and a modern marvel of dramatic entertainment. The way Walter White’s story closes makes complete sense with nary a plothole to be seen. It was universally beloved at the time of its airing and remains so a near-decade later.

“Ozymandias” is the only episode of TV with a 10.0 rating on IMDB. “Felina” closed the door with an epic finale hour. And Hank discovering the true meaning of Heisbenberg mid-poop is an all-time mid-season break.

Better Call Saul’s sixth season is held back a bit by a first-half sequence that included a little too much time spent on Jimmy and Kim’s character-demolition of Howard. “Plan and Execution” makes the first half-season feel all worth it, but we have to use the complete season to make our judgments here. It concludes with an emotionally ravaging final two hours that rival its predecessor’s, but the season as a complete package is slightly inferior to Breaking Bad’s culmination.

Better Call Saul did all it could to compete with its predecessor here. Unfortunately, Easter eggs and actor cameos are glorious for fans in the know, but they ring somewhat hollow unless you have a love and appreciation for the source material.

Breaking Bad remains on the Mount Rushmore of television concepts. Network executives must have thought Vince Gilligan was insane when they first heard what his show was going to be about. A high school chemistry teacher transforming into the most powerful drug lord in America, all while running out of time on his cancer clock? Let’s just admit it’s something that should have gone awry. Instead, Breaking Bad is the most creative show in its genre, one that was exquisitely planned and executed (pun intended).

With their imagination as their only constraint on storytelling, the show helped launch the streamer Netflix into the modern binge-watching movement. Each episode ends on a semi-cliffhanger, with a character-defining moment settled or a novel plot thread being opened, with sometimes both occurring simultaneously.

Better Call Saul always stays a little closer to the vest because it’s indebted to Breaking Bad, both literally and metaphorically. The emotional impact of what happens in both shows is remarkable, but only the first one makes you feel like you are truly . . . *Walter White voice* . . . alive.

With both shows completed now, Breaking Bad and Better Call Saul tower over their competition, their only rivals being each other. But if Lalo Salamanca (Tony Dalton) had his gun pointed at your head and said you have to pick, we have to admit that Breaking Bad would roll off the tongue quicker.
Even though Better Call Saul surpasses it in terms of many technical aspects of television like character work and cinematography, the originality and the unparalleled final season of Breaking Bad allow it to remain on the throne. Maybe Vince GIlligan’s next series that takes place outside of the Southwestern United States will surpass both. Never underestimate these writers. Bravo, Vince and Peter.