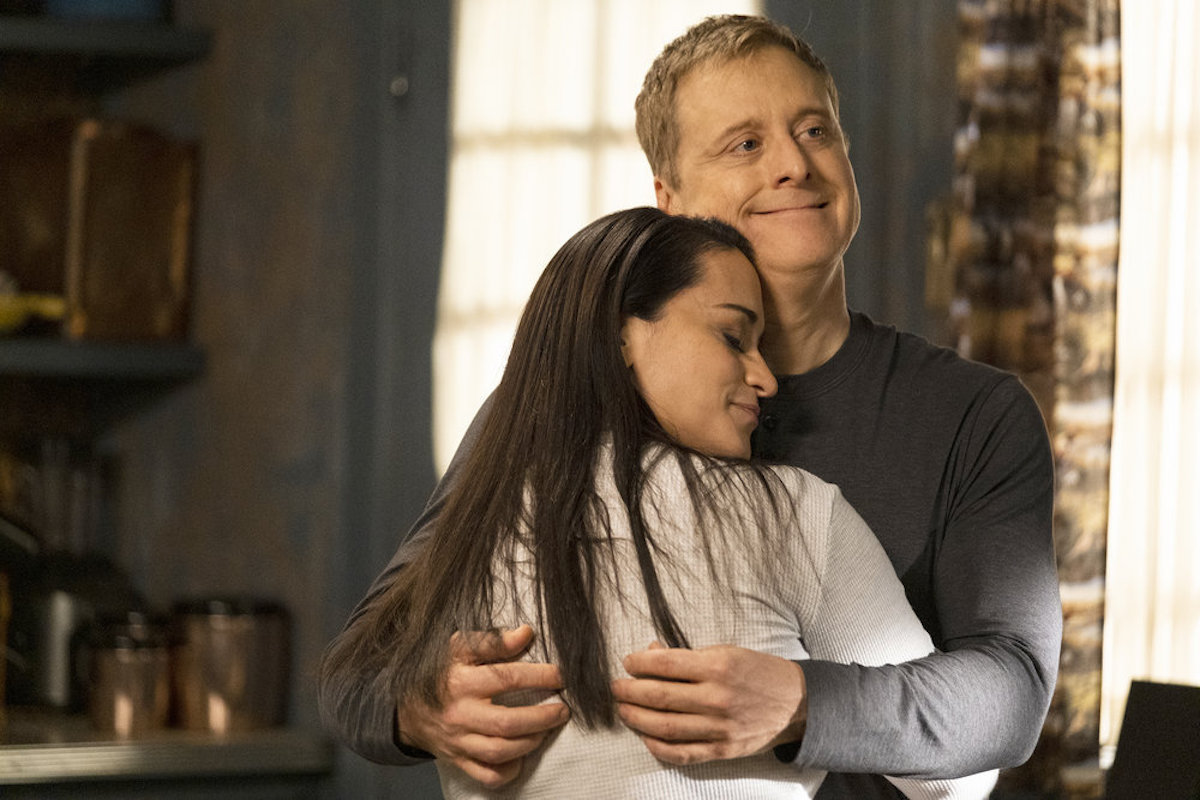 SYFY’s Resident Alien is at its best not when it’s showing us how different Harry, an alien living in disguise on Earth, is from the humans around him but how much he—perhaps despite himself—actually has in common with them. Like many of the residents of Patience, Harry is just another being trying to belong. And over the course of the series, we’ve him explore many aspects of himself as he slowly makes sense of the oddities of human behavior and emotion, from love and affection to anger and fear.

Yet, it’s the murder of a stranger—-a man sent to kill Harry because the real Harry Vanderspiegle got caught up in some shady dealings that resulted in doctor Sam Hodges’ death—that brings the concept of death into stark reality for the alien, as well as several other Patience residents. From Asta, who kills a man to save Harry’s life, to D’Arcy, who helps her friends hide his body, and even Harry himself, who is forced to confront his own mortality in a very direct and uncomfortable way after being shot, the back half of Resident Alien Season 2 is clearly very concerned with themes of death and the ways our feelings about it can influence how we live our lives.

What’s most interesting about “The Ghost of Bobby Smallwood” is that the episode barely moves the needle on any of the season’s major arcs. Sure, we now know the baby alien is masquerading as a dead child who went missing in Patience many decades earlier and the local police department has officially teamed up with their Jessup counterparts to investigate the murder of the man who shot Harry, but other than that almost every major development in this hour is an internal and emotional one.

This isn’t exactly a new development for a series that has constantly used Harry’s exploration of specific human traits or foibles as a mirror for the various dilemmas that are also facing many of his neighbors. (The layers the show has given these seemingly secondary characters and the depth of the relationships between them is one of the reasons Resident Alien is so good to begin with.) But this episode balances these competing narratives brilliantly weaving at least five different subplots together into a rich, cohesive whole.

D’Arcy mends fences with Kate and makes a conscious decision to stop self-sabotaging her budding relationship with Elliot, allowing herself to stay the night at his house. Sheriff Mike opens up to Ben about his own firsthand experience with the ways that shoving your emotions under the rug for too long can be dangerous. And Ben tries to talk to Kate about their marital problems but fails utterly when his decision to do so in a public place (taking Mike’s admittedly sketchy advice about potential husband murder at home) causes her to realize he’s afraid of her.

Yet, rather than give up, Ben tries again, seeking to reconcile with his wife by recreating how they first connected. And while it’s unlikely that Sheriff Mike would approve of his methods, his unconventional idea of the two of them talking to one another over the phone, the way they used to when they first met, helps bring down some of the walls between them and pushes the pair closer together than we’ve possibly ever seen them on the show.

That, as the kids say these days, is growth.

And as for Asta, she learns the truth about her missing memories, but Resident Alien doesn’t use this moment as a chance to drive an unnecessary wedge between her and Harry (or keep her in the dark about the things she’s forgotten for longer than half the episode, thank goodness). She doesn’t rage at him for controlling behavior but instead tries to understand his decision in the context of the lingering trauma caused by his own near-death experience. The result is a surprisingly honest heart-to-heart between the two about death, grief, and pain, in which Asta not only explains the concept of comfort eating but how allowing ourselves to truly feel the scope of the things we experience—for both good and ill—is part of what makes us stronger (and better) people.

Grief and pain are important elements of what it means to be alive, and, yes, part of that journey is realizing our time here is finite. But it’s also about the realization that life is meant to be lived  It’s a remarkably grounded, serious moment for an episode that also includes jokes about deep-frying pie, but because we’ve watched Harry’s struggle with his growing, distinctly human feelings for the better part of two seasons now, every emotional beat feels completely earned.

On a different sort of show, Harry’s fear of his own mortality might be used as a way to punch down, to give the audience an easy way to feel comfortable laughing at a difficult topic, or simply make his character the butt of a broader joke. Instead, Resident Alien takes a different tack and shows us a Harry literally confronting death head-on, with all the complex emotions that necessarily involves. One of his patients, a terminally-ill man named Gerald, has requested that Harry, as his doctor, bring him some pain medication. But what he really wants is for him to perform a supervised euthanasia.

Visibly nervous and uncomfortable in the face of Gerald’s calm acceptance of his choice, Harry finally manages to admit that he is afraid of death, before granting his patient a final act of mercy and an easing of the pain (both bodily and otherwise) that his life had become. It’s a profound moment, and a fairly brave one too—after all, it’s hard to think of any other current genre series on the air that regularly deals with such morally weighty topics in quite so a deft manner, certainly not any that are marketed as awkward alien comedies at any rate. Harry’s soft “What is it like?” just as Gerald slips away is a gut-punch combination of anxiety and curiosity and wonder—because, after all, isn’t that what we all want to know? Isn’t that why we find death so scary? That we don’t know what’s next? And we can’t know, until it’s too late.

A theme of quiet, often unexpected bravery runs throughout this episode, as almost every character is asked to face something that scares them—whether that means finally opening up to another person or being present for their dying breath—in the hopes of coming out someone different, someone better on the other side of it. Which is, in its way, the best metaphor for being human I can think of.