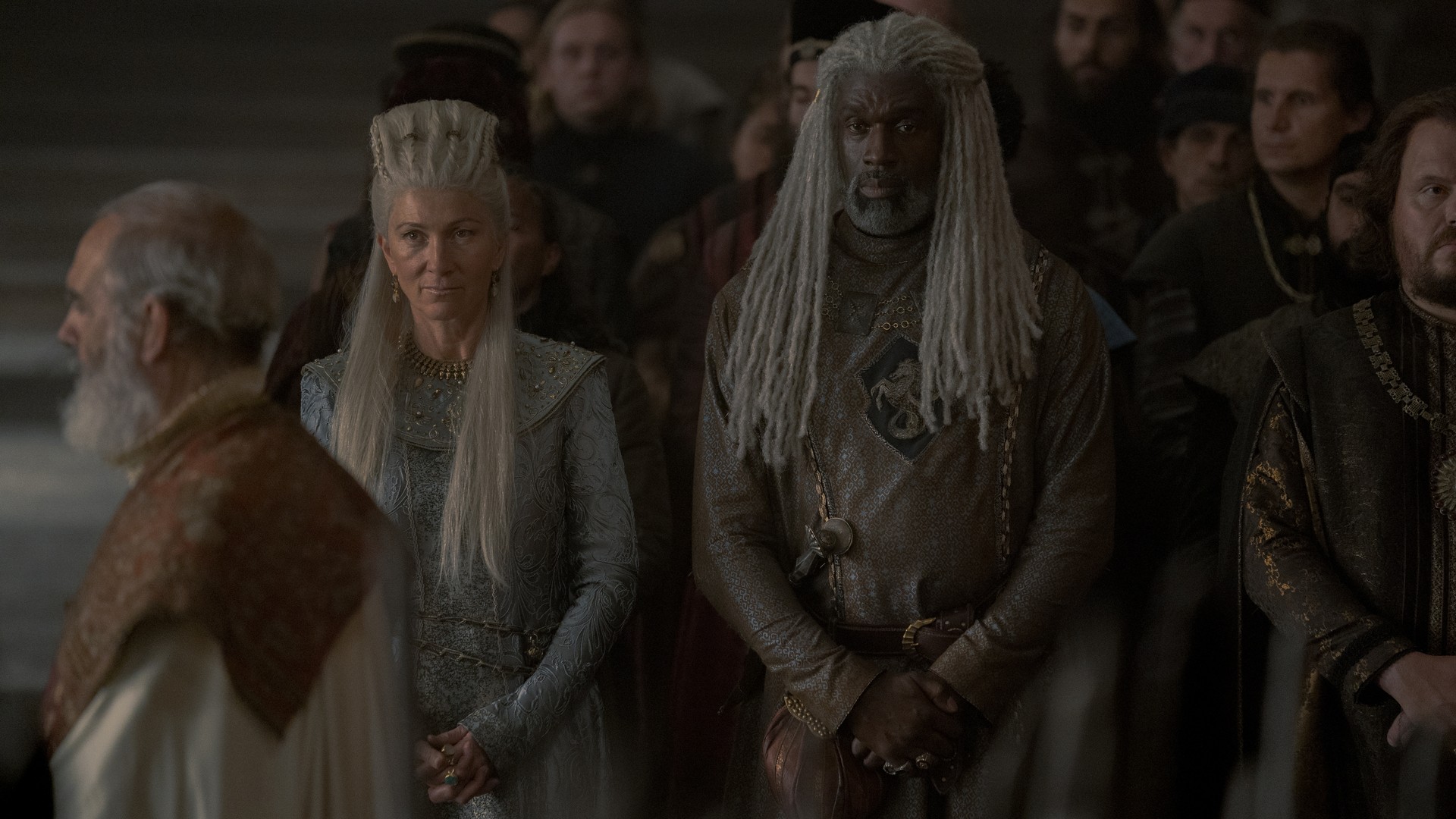 The upcoming Game of Thrones prequel, House of the Dragon, will feature an extensive ensemble cast. Even though the focus of House of the Dragon will primarily be on the Targaryens and their bloody civil war, there are plenty of characters outside the titular house of dragons that will help expand the world of Westeros during this time period. Set 200 years before the events of Game of Thrones, we get to see familiar houses and families at different stages of power, as well as powerful houses like the Velaryons who are all but wiped out by the time Game of Thrones begins. Like its predecessor, House of the Dragon will likely have plenty of drama, conspiracy, and questionable relationships between its characters as the season moves forward, but here’s what we know about the main cast so far.

King Viserys Targaryen, father to Princess Rhaenrya Targaryen and older brother to Prince Daemon Targaryen, is a “warm, kind, and decent man” who wants to do right by his family and carry on his grandfather’s legacy. Actor Paddy Considine, who also starred in the HBO miniseries The Outsider, plays this Targaryen patriarch. Edgar Wright fans may recognize Considine from his roles in Hot Fuzz and The World’s End.

The first born child of King Viserys, Princess Rhaenyra Targaryen has been selected  as his heir despite the Targaryen’s history of patriarchal lineage. Her pure Valyrian blood makes her a natural dragonrider, like her uncle, Prince Daemon, but the fact that she is a woman makes her path to the throne less certain. Australian actress Milly Alcock plays Princess Rhaenyra in her youth. While this may be Alcock’s first major role in American television, she’s appeared in Australian miniseries The Gloaming and Pine Gap, which can be watched in the U.S. on Starz and Netflix respectively. The adult Princess Rhaenyra is played by Emma D’Arcy, who you may recognize from the short-lived Prime Video series Truth Seekers and the Netflix original Wanderlust.

The eleventh Doctor himself, Matt Smith, is Prince Daemon Targaryen. The younger brother of King Viserys, Prince Daemon is a fierce warrior and dragonrider who seeks the power of the crown for himself. Aside from Doctor Who, Matt Smith has also starred in The Crown, Edgar Wright’s latest film Last Night in Soho, and Morbius.

The wife of Lord Corlys Velaryon, Princess Rhaenys Targaryen almost became the first Targaryen Queen after the death of the Old King Jaehaerys Targaryen, but the Great Council chose her younger cousin, Viserys, as his successor instead. Eve Best, who you may recognize from Fate: The Winx Saga or Nurse Jackie, plays this formidable dragonrider.

Steve Toussaint as Lord Corlys Velaryon a.k.a. “The Sea Snake”

Like the Targaryens, House Velaryon hails from Valyria. While the Velaryons may not have dragons at their disposal, their seafaring capabilities make them formidable opponents and powerful allies. Before his marriage to Princess Rhaenys, Lord Corlys was an adventurer and explorer. Now he leads one of the richest families in Westeros. Steve Toussaint brings an extensive filmography to this role, including movies like Judge Dredd and Prince of Persia: The Sands of Time. Toussaint also appears in the Australian Netflix series Pine Gap with young Princess Rhaenyra actress Milly Alcock.

Rhys Ifans is no stranger to roles in genre fare. From his brief appearance as Xenophilius Lovegood in Harry Potter and the Deathly Hallows: Part 1 to his villainous turn as Dr. Curt Connors in The Amazing Spider-Man, Ifans has played characters that aren’t afraid to use or manipulate others to get what they want. Otto Hightower is the Hand of the King and serves both the Old King Jaehaerys I and King Viserys as their most trusted adviser. Otto sees Prince Daemon’s desire for power as a threat to the realm and therefore uses his position to influence King Viserys’ perception of his brother.

Daughter of the Hand, Alicent Hightower is played by Emily Carey in her youth and by Olivia Cooke as an adult. Because of her father’s position, Alicent was raised in the Red Keep and grew up as a friend to Princess Rhaenyra. House of the Dragon isn’t the first time that Emily Carey has played the younger version of a strong and powerful woman. She also appears as the 12 year-old version of Diana in 2017’s Wonder Woman and as the 14 year-old version of Lara Croft in the 2018 Tomb Raider film adaptation. Olivia Cooke has had many roles in horror and drama films and TV series including Bates Motel, Ouija, Thoroughbreds, Sound of Metal, and Ready Player One.

Ser Criston Cole is “the common-born son of the steward to the Lord of Blackhaven” and although he doesn’t have any land or a title, he is an incredibly skilled swordsman. Ser Criston is played by Fabien Frankel, who had a small role in the movie Last Christmas with Game of Thrones alum Emilia Clarke and a recurring role in the BBC miniseries The Serpent.

Despite coming to Westeros with nothing, Mysaria has risen in status to become Prince Daemon’s most trusted ally. Fans of Alex Garland’s work may recognize actress Sonoya Mizuno from her roles in his projects Ex Machina, Annihilation, and Devs. You may also recognize Mizuno from the Netflix miniseries Maniac.

Ser Harrold is a figure of chivalry and honor in the Kingsguard, where Harrold has served since the days of King Jaehaerys. This pillar of strength is played by Graham McTavish, an actor with many credits in genre work including The Hobbit trilogy, The Witcher, Outlander, and Preacher.

Ser Harwin ‘Breakbones’ Strong is the eldest son of the Master of Laws Lyonel Strong and is said to be the “strongest man in the seven kingdoms.” ‘Breakbones’ is played by Ryan Corr, who you may recognize from the movies The Water Diviner and Mary Magdalene.

Twins Jason and Tyland Lannister are played by Jefferson Hall, who you may recognize from the Hulu series Devs, in which he starred with Sonoya Mizuno. Hall also had a small role as Ser Hugh of the Vale in the first season of Game of Thrones. Lord Jason Lannister is the Lord of Casterly Rock while his brother Tyland is a “crafty and calculating politician.”

Like Otto Hightower, Grand Maester Mellos is a trusted adviser to King Viserys. Mellos is a voice of reason amidst the more crafty and calculating members of the King’s court. Mellos is played by David Horovitch, an actor you may recognize from the films Young Victoria, Cassandra’s Dream, and the live-action 102 Dalmatians.

The younger brother of Ser Harwin, Larys Strong is brought into the King’s court by his father. Larys is played by Matthew Needham, who has had small roles in Chernobyl, Sherlock, and Doctor Who. Needham has also appeared in the period drama Sanditon.

Bill Paterson is Lord Lyman Beesbury, a member of King Viserys’ small court where he serves as the Master of Coin. Paterson will most likely be recognized for his role as Fleabag’s father in Fleabag, but he has also appeared in The Sandman and Good Omens.

Father of Ser Harwin and Larys, Lord Lyonel Strong serves on the King’s court as the Master of Laws. Lord Lyonel is played by Gavin Spokes who has appeared in the TV series The Ipcress File and the Peacock original Hitmen.