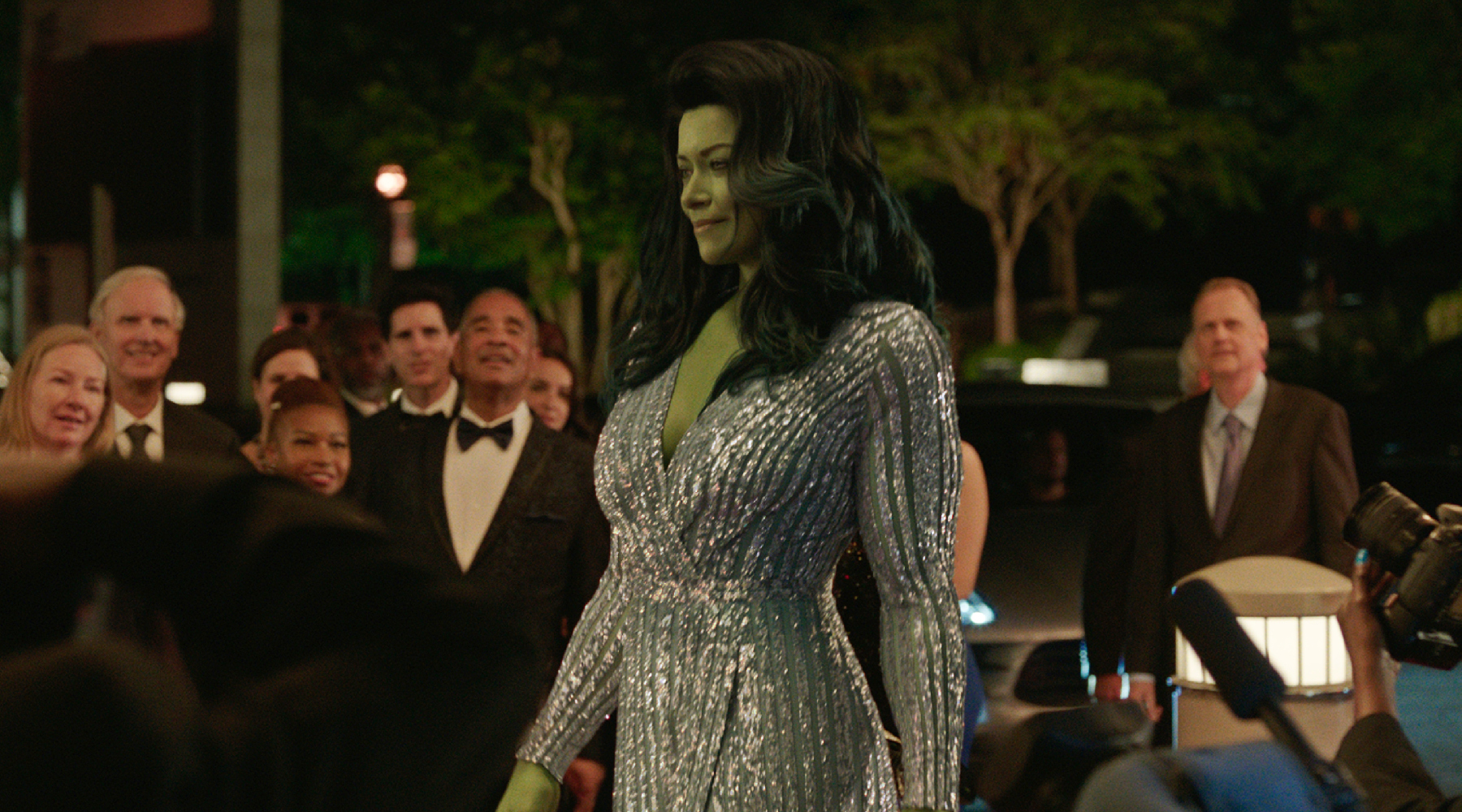 This article contains spoilers for episode one of She-Hulk: Attorney at Law.

She-Hulk, aka Jennifer Walters, made her entrance in the pages of Marvel Comics in February 1980, when her debut book, The Savage She-Hulk, hit the stands. In the book, Walters is a criminal defense attorney who runs afoul of a crime boss with a beef against her father, a Los Angeles County Sheriff. The boss orders a hit on Jennifer, who is gravely wounded and in need of blood.

It just so happens that her cousin, Dr. Bruce Banner, is on the scene and – since their blood type and DNA match – gives her an emergency transfusion. But since his blood is full of gamma radiation, it has the same effect on Jennifer that it did on Bruce – it turns her into a large, green-skinned monster whenever she exhibits anger (in the comics, Jennifer eventually gains more control over her transformation and later becomes She-Hulk permanently).

For She-Hulk: Attorney at Law, the new Disney+ series produced by Marvel Studios, the show’s creators changed Jennifer’s origin story for the show’s premiere. Instead of getting shot by a mob assassin, Jennifer (Tatiana Maslany) is on a road trip with Bruce (Mark Ruffalo) – with whom she shares a warm relationship – when their car is sent flying off the road by an Sakaaran vessel looking to pick up Bruce.

Both Bruce and Jennifer are left injured and bleeding once the car comes to a stop after tumbling down a ravine, and unfortunately Bruce’s gamma-irradiated blood drips into the open wound on her arm – with the same results as the comic. Jennifer transforms into She-Hulk, but much to Bruce’s surprise after he shepherds Jennifer to his secret lab in Mexico, she is able to manage her transformation and keep her personality intact even when she goes green.

When Den of Geek asked She-Hulk head writer Jessica Gao about the change to Jennifer’s origin story, she told us that the mandate came from Marvel brass – but how to change it was left to the writers. “Up top at Marvel, they specifically didn’t want to do the mob hit story because it just felt like it didn’t fit and wasn’t that interesting to bring into this,” she says. “That was the only directive I really got.”

Gao explains that she also felt that the idea of Bruce Banner deliberately giving some of his blood to his cousin – even in a potentially deadly situation – ultimately didn’t make sense for the version of Banner that has been part of the MCU for more than a decade.

“I spent a lot of time thinking about Bruce and whether or not the Bruce that we know from the movies would actually give his cousin a blood transfusion, even if it is an emergency,” Gao says. “We watched him for so many years in so many movies, this version of Bruce Banner, and he’s really struggled with [turning into the Hulk]. He really saw it as a curse. He’s been tortured for so many movies. It took him over a decade to just come to a place where he’s finally okay with it.”

Indeed, the Banner of the MCU worked for years to find a way to control his Hulk persona, only for it to take over completely in Thor: Ragnarok, then go into hiding in Avengers: Infinity War when Banner needed the big guy most. It was only in Avengers: Endgame that we learned of Bruce’s successful endeavor to merge both sides of himself – Bruce and Hulk – into the hybrid known as Smart Hulk.

“He’s never ever seen it as a blessing,” continues Gao. “So I just can’t imagine that this guy that we watched be tormented by this for over a decade would be willing and cavalier to just curse his cousin with this. And to it’s not just a random person he’s saving. It’s his cousin, somebody that he cares about and that he knows personally, and it just didn’t feel like it made sense for this character.”

Gao’s other imperative was that she didn’t want to spend time setting up a back story about Jennifer’s interactions with local crime organizations, preferring instead to jump almost immediately into her transformation into She-Hulk and what impact that has on her life as a woman, her interaction with family and friends, her dating life, and her career over the course of nine episodes.

“I didn’t want to spend half an hour setting up all the circumstances and all the back story that would lead to an accident,” Gao says. “We wanted to just get to it, so then we can actually deal with the part of the show that we actually wanted to watch, which was like, how does she then deal with it afterwards?”

She-Hulk: Attorney at Law is now streaming on Disney+, with new episodes arriving on Thursdays.

House of the Dragon: Larys Strong Is the Tyrion Lannister of His Day
Taskmaster: Ranking Every Series From Merely Quite Good to Ludicrous Best
How to Get All Cyberpunk: Edgerunners Equipment in Cyberpunk 2077
Why the Multiverse Could Be the Key to Wanda’s MCU Return
The Last of Us HBO Series Trailer Reveals Nightmarish Clicker Designs