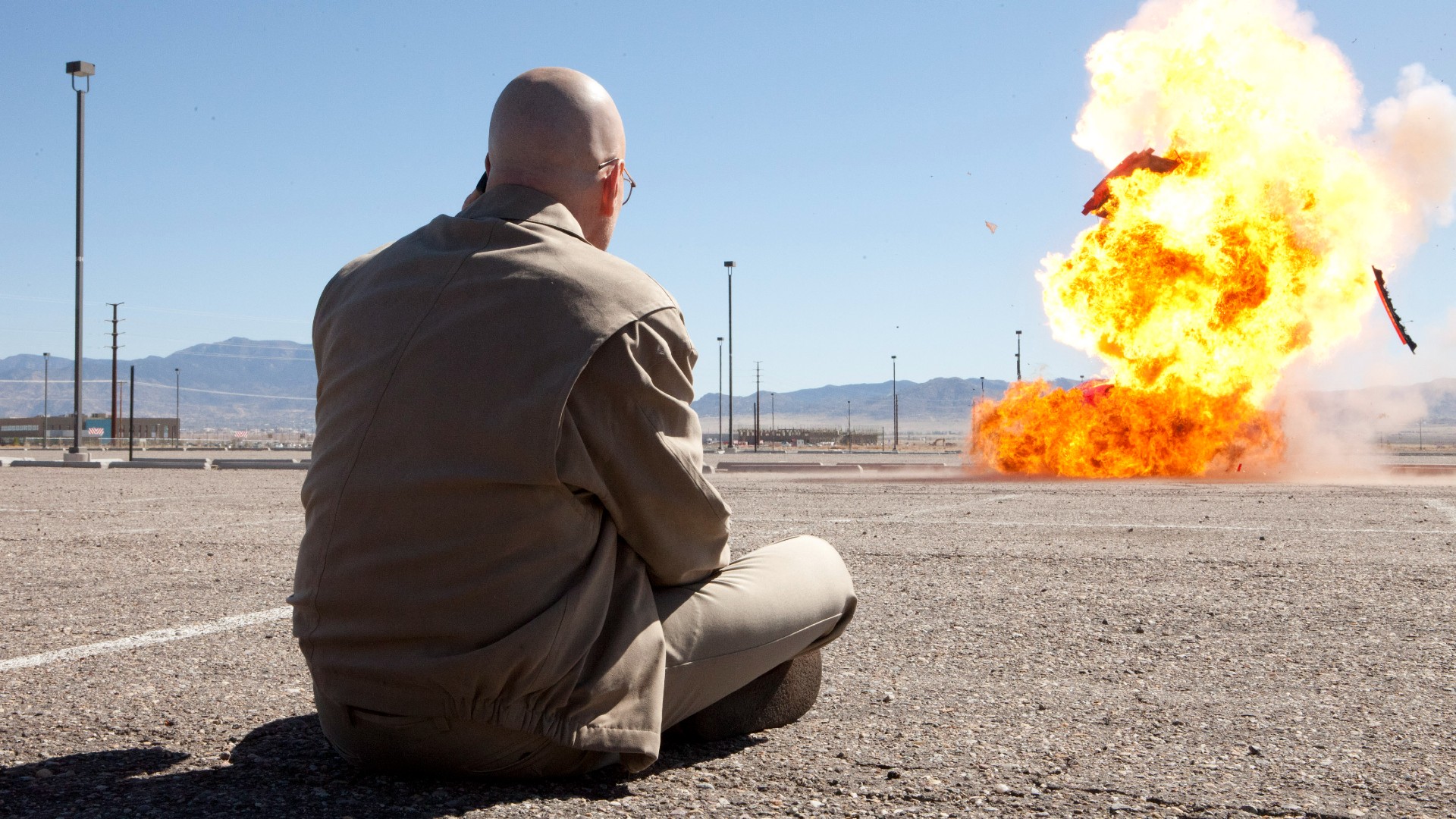 There have been so many movies turned into video games in the last several decades that it’s hard to keep track of them all. On the other hand, television-to-game adaptations have been a little more sparse. This might be because game developers don’t know what genre to fit specific TV shows into.

Turning a 1990s sitcom like Home Improvement into a video game resulted in a side-scrolling Mega Man-esque knockoff that saw Tim “the Tool Man” Taylor killing prehistoric animals with wrenches and hammers. It’s proof that many TV programs simply shouldn’t be translated to the gaming medium because there’s no sensible way to do so. Even when there is an attempt that makes sense, like the action-oriented The Sopranos: Road to Respect, the shoddy execution of the idea hinders the whole project.

That doesn’t mean we can’t dream of making the perfect video game experience for our favorite TV shows. It’s a creative endeavor that Breaking Bad and Better Call Saul showrunners Vince Gilligan and Peter Gould have thought about several times throughout the years. The pair told the podcast Inside the Gilliverse last month that they even wanted to contact developer Rockstar Games to see if they would be interested in making a semi-open world adventure in the vein of their biggest hits such as Grand Theft Auto.

With nothing tangible seeing the light yet, we thought it’d be really fun to brainstorm some of the most effective ways the ABQ meth-verse could become fully realized in a video game. We will try to survey several different genres and consoles to get the most creative, yet realistic results.

This is the highest-risk, highest-reward genre that these shows could be translated into. The beautiful New Mexican landscape from these worlds could be further fleshed out in an open-world adventure game, giving the fans a playground to wander around in and explore. It could either play out like Red Dead Redemption, where you play as Walter and you galavant around the desert and the metropolis, interacting with all of the citizens of Albuquerque. Or it could resemble the Uncharted series, where it’s a lot more action-oriented and with linear progression.

The developers would have to decide whether the missions would take plot lines directly from the shows, or whether they would be a mix of canon-fodder with novel stories. This option would allow for the game to fill in some of the things the shows didn’t get to spend time with. For example, a lot of us always wanted to see more of Jesse’s daily escapades with Mike in the fourth season of Breaking Bad, or Walt’s race to the top of the meth food chain in the middle of the fifth season. We can easily imagine this being a huge hit on the PS5.

RPGs are the best types of games for character-intensive experiences, and Breaking Bad and Better Call Saul are definitely that. Leveling up Walter White, Jesse Pinkman, Jimmy McGill, and Kim Wexler with new abilities and items would flawlessly mirror the way their characters change in the shows.

The biggest thing a developer would have to figure out is what type of combat the game would have. Turn-based seems like the best option. There aren’t enough antagonists or on-screen enemies to go around hacking and slashing like in Diablo. A role-playing adventure with these characters would have to be slower, more deliberate, and atmospheric.

A JRPG is kind of out of the question because of the neo-western themes. The closest thing I can think of that eliminates all of these disclaimers is Star Wars: Knights of the Old Republic. Choosing between all of the fan-favorite characters for your playthrough means going through the journey with a different character class that distinctly affects your trajectory in the game.

Walt and Jesse’s power-ups would be different from Hank and Gomez – they’d be more of a stealth class because they often win with guile or trickery, whereas their counterparts are more heroic because they are DEA agents. This would be a massive game that would live on PC and the PS5.

The best way to turn these shows into a puzzle game would be to make different mundane aspects of them into a set of brainteasers or minigames – think WarioWare or Cooking Mama. If the former served as inspiration, players would toggle through dozens of stand-alone minigames that show different parts of the world we’ve come to love.

Measuring certain chemicals while cooking meth, driving the RV through the desert after dark, getting documents out of Chuck’s house before he wakes up from his EMS-induced sleep cycle, etc. would all serve as great minigames in a Breaking Bad version of WarioWare

The Breaking Bad/Cooking Mama idea for a puzzle game would mainly be in the meth lab. Players would manipulate the drug-production process as Walt or Jesse, mixing ingredients and testing the meth for purity. There was even a fan-made game by a man named Juan David Gómez that turned some of these thoughts into a reality back in the show’s hayday.

The puzzle genre is so diverse that there’s really no limit to the different types of games you could make. A block puzzle game like Tetris would be fun to imagine in Gus’s meth lab. Moving different ingredients into the correct positions to get a high score would be addicting and fun.

A trivia game about the shows inspired by the Are You Smarter Than a 5th Grader video games would be a great party experience with a room full of friends. The setting of the quiz could be inside Walter White’s classroom, and Walt is the one proctoring the exam with his trademark smartassery. These games feel like they would have fit best on the PC or the Switch.

The visual novel genre isn’t one of the most popular in gaming, but it would fit Better Call Saul perfectly, especially the legal part of the show. If you think about the Ace Attorney series, you know that people are interested in engaging with courtroom drama and making decisions that could result in a guilty or innocent verdict for clients.

We hardly ever get to see Jimmy, Chuck, Kim, or Howard in their natural habitats, with their legal scenes often being interspersed with their personal lives in the series. In a visual novel video game, players could control each of these four lawyers and come to understand their very different litigation techniques.

Witty dialogue and thought-provoking puzzles would tie the whole thing together perfectly. This type of game would live on the Nintendo Switch most easily, but would have been even better on the 3DS.

As obscure as it sounds, the Breaking Bad universe actually has quite a few characters who could fit into a fighting game. Considering how violent the Salamanca family is, it makes complete sense to put them in a ring Street Fighter style and have them duke it out. Tuco, Lalo, the cousins, Nacho, Gus, Tyrus, and Mike would all have their own unique move set.

Nacho would be defensive because he is a naturally passive criminal. Tuco would be out of control and full of rage, forcing the player to harness that power to win the match. Gus would be calculated and use weapons instead of fists, as we know how much his signature box cutter would impact the fight.

There is certainly precedence for hand-to-hand combat in these shows, with Mike taking a licking from Tuco to get him in prison in the second season, and Howard and Jimmy boxing in the sixth season.

Involving the entire world of characters and not just those in the cartel-sphere would make for some wonky combinations and wacky attacks, and Super Smash Bros. and Multiversus have proven this type of game is possible. From Walter throwing pizza in the air to Kim twirling her ponytail at the enemy, there’s an infinite number of fighting possibilities. Online play would be ideal on the PC for this type of fighting game.

What would you imagine a Breaking Bad/Better Call Saul video game to look like? Let us know in the comments section below!