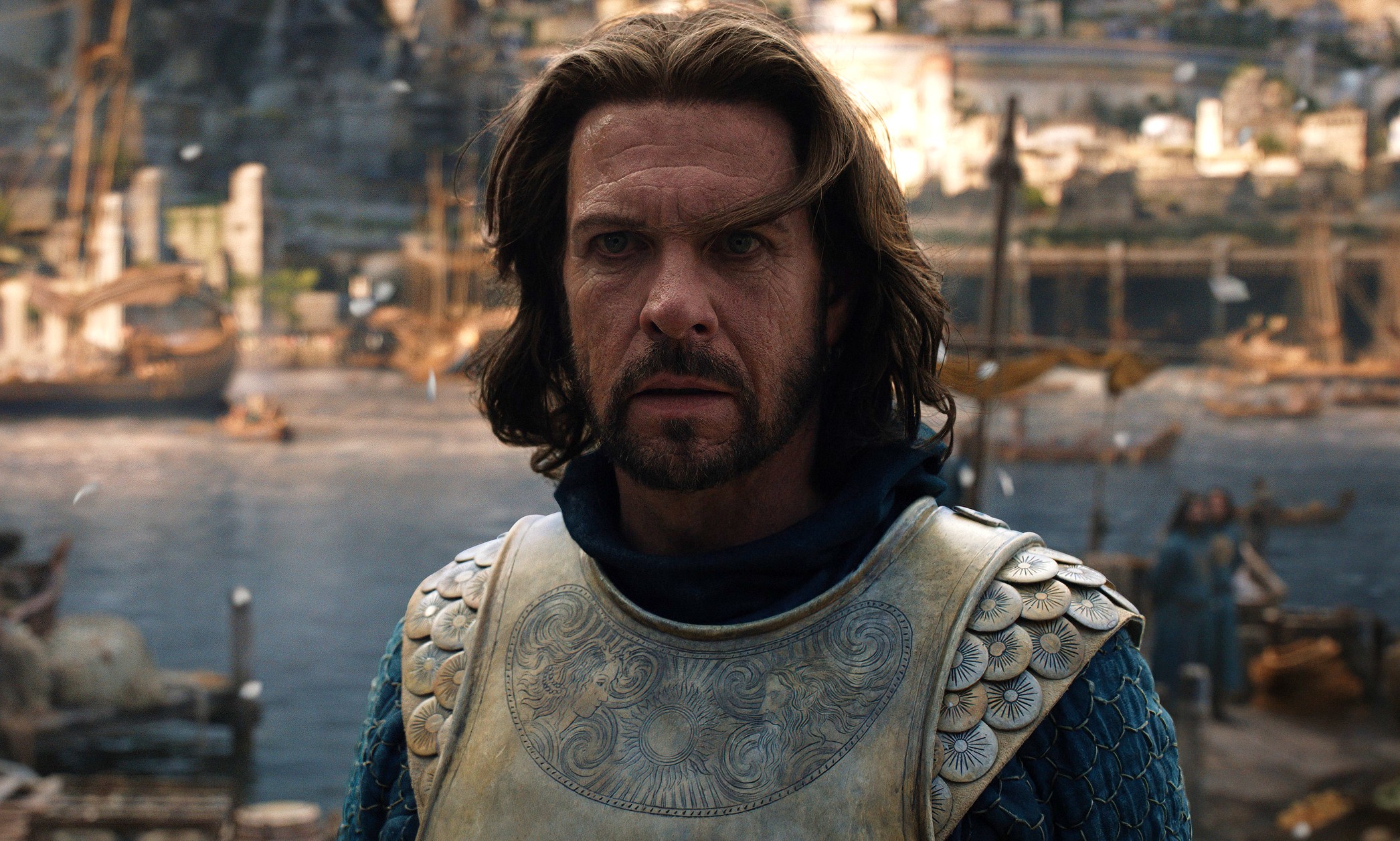 This Lord of the Rings article contains spoilers for The Rings of Power.

This week’s episode of Lord of the Rings: Rings of Power introduces Elendil, one of the very few characters in the series who also appears in Peter Jackson’s film trilogy. But if you blink you will miss him.

In the battle sequence of The Fellowship of the Rings‘ prologue, the character is played by Peter McKenzie. He has a go at fighting Sauron, dies immediately, and his sword is smashed into bits and remains that way until Aragorn puts them all back together again in Return of the King. Yes, Elendil’s appearance is brief, but one that casts a shadow over the entire Lord of the Rings saga, and his presence is felt even more keenly in the books.

“From when I read the books and how often he’s referenced it’s clear how important he is to everyone in the Third Age, to all of the men at least, down to Aragorn who’s his 38th great grandson. He’s a sort of hero archetype,” Lloyd Owen, who plays Elendil in the series, tells Den of Geek. “What one discovers particularly since doing this job and being around fans who know much more than me is how dear Elendil is to everyone’s hearts, and it’s surprising because there’s very little written about him.”

In the books, Elendil leads the survivors of the fallen city of Númenor, Tolkien’s version of Atlantis, to Middle-earth, he founds and becomes king of the realms of Arnor and Gondor before eventually dying in that battle with Sauron at the end of the Second Age.

And yet, despite a critical role in the defeat of Sauron, and his status as Aragorn’s ancestor, most of what we know of his drawn from The Lord of the Rings‘ appendices, Tolkien’s collection of stories and essays called Unfinished Tales, and the author’s own letters.

That Elendil is basically a mythical figure inside a story inspired by mythology means that the makers of The Rings of Power have had a lot of room to interpret and fill out the character.

“What’s been fascinating is how precious he is to folk without knowing him,” Owen says. “The privilege and real joy is to open him up in three dimensions. Obviously I’ve had plenty of discussions with J.D. [Payne] and Patrick [McKay], our showrunners, and there’s plenty in their imagination to fully round him out. I think much of their thinking will be that a hero isn’t born, they’re made, and how does Elendil get shaped so that he does make that sacrifice at the end of his life.”

The other major character in the opening scene of Jackson’s movie is Elendil’s son, Isildur, and his choices have far reaching consequences that, in many ways, are responsible for the entire Lord of the Rings saga.

Isildur is the one who takes Elendil’s fallen sword and slays Sauron, but ultimately refuses to destroy the One Ring at Mount Doom, leaving the door open for the Dark Lord’s eventual return. The relationship between Elendil and Isildur will prove to be a key strand of the Amazon Prime series, but Owen cautions against viewing it as a simple origin story.

“It’s not my job to write this but I’m sure the boys are wary of writing a bit of pop psychology and saying he had a difficult dad, and therefore was a troubled person, and therefore didn’t throw the ring in the fire, which is a story I don’t think Tolkien would be interested in necessarily,” he tells us. “But inevitably we’re all shaped by our childhood. If you take the nature/nurture debate, nurture is a larger player in it and that’s not just a parent but everything outside of that. It includes the effects of growing up in Númenor, the schism in that society, how that affects Isildur, how it affects Elendil, how it affects [Elendil’s daughter] Earien. At this stage of his life, as you see him in episode three, I don’t think you could argue Isildur would make the same decisions.”

That is of course a hypothetical, but Owen enjoys thinking about the “What ifs?” of Middle-earth.

“I’ve also posited the question that if Tolkien did write him, if [Elendil] had the ring, would he throw the ring into the fire?” Owen says. “I talked to Corey Olsen, a Tolkien professor and he immediately said ‘Yes! He would throw it into the fire!’ and that just revealed how close he is to people’s hearts.”

Owen, however, remains to be convinced.

“If Tolkien wrote it, I don’t know, would he not say that we don’t know what will happen if anyone holds that ring? We don’t know. And that’s really fascinating to me,” he says. “To that extent I started thinking about that question, just what informed how he would be if that had been the scenario? What in his life would make him throw the ring in or not throw it in?”

When we meet Elendil in The Rings of Power, there is one other relationship that will prove crucial to his story, and this character is even harder to find in the books than Elendil himself, as the showrunners invented her. However, even in introducing new characters, the writers have been careful to stay close to the spirit of Tolkien’s writing.

“J.D. and Patrick had the scope to introduce new characters and they have introduced new characters, but they’re all Tolkienian,” Owen insists. “Both showrunners are huge fans of Tolkien with encyclopedic knowledge of him, so the introduction of this character will absolutely fit into the themes of Lord of the Rings, and I think it’s quite brilliant.”

This new character is Elendil’s daughter, Earien (Ema Horvath). A lot like the hobbits in Lord of the Rings, this family will serve as a window to view the epic events of the Second Age from a very human perspective.

“The way they’ve set this sparsely written character of Elendil is they’ve set him up as a widower, so there are the repercussions of the death of his children’s mother, the death of his wife, and how that turbulence is reflected in the family alongside the current schism in Númenor that’s coming,” Owen says. “There is the personal, the effect of grief on a family, and the political and the way those two worlds collide. I think they’ve set up that family very well to reflect what’s happening in the wider world. Because every character in Tolkien is hugely affected by those events that are enormous and epic and beyond their control, so hopefully the audience will find a way in in a personal sense through this family.”

The Lord of the Rings: The Rings of Power streams on Fridays on Amazon Prime Video.

The Legend of Zelda: Who Created the Triforce?
The Last of Us HBO Series: How Melanie Lynskey’s Character Expands the Game’s Universe
House of the Dragon: Meet the New Princess Rhaenyra and Queen Alicent
MST3K Season 13 is Embracing the Chaos
Wrath of the Lich King Classic: Every WoW Class Ranked Best to Worst