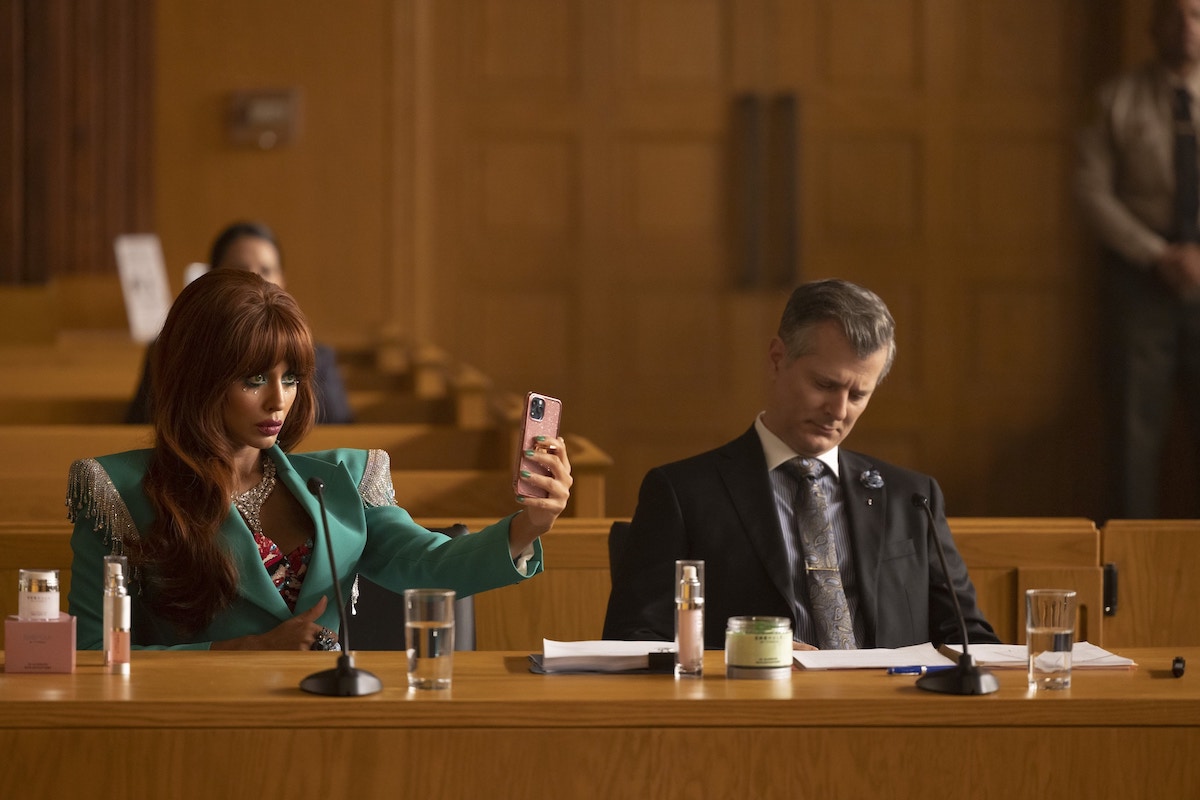 Like many (most?) other half-hour comedies, She-Hulk: Attorney at Law has taken a few episodes to settle into its groove. Between the series’ controversial fourth-wall-breaking narration and its embrace of a purposefully broad brand of humor that ranges from self-deprecating to downright uncomfortable, the show has definitely established itself as something very different from everything in the Marvel Cinematic Universe that’s come before it. But with the arrival of its fifth episode, She-Hulk finally seems fully confident in what kind of show it wants to be.

Though the reveal of Daredevil’s new helmet will likely dominate much of the post-episode discussion around this installment—and look, I get it, I am ready for the return of Matt Murdock, particularly since this episode definitely hints that the Netflix version of the character is more than likely still canon—”Mean, Green, and Straight Poured Into These Jeans” is the series’ most cohesive installment yet, one that actually uses its broader plot to say something significant about Jen Walters’ journey as a superhero.

That it does so in an incredibly silly fashion is par for the course at this point, but there’s something refreshing about the way that She-Hulk has decided to fully lean into its unique brand of Hallmark store feminism and goofy charm without apology. The long-awaited return of Jameela Jamil’s superpowered influencer Titania helps set up what will clearly be the series’ primary rivalry but, more importantly, kicks off a surprisingly nuanced story about identity and self-acceptance.

Jen Walters never wanted to be a superhero. She acquired her Hulk powers by sheer accident, was dubbed She-Hulk by popular demand, and was forced to embrace her secret identity publicly in order to keep a job she desperately needed. For much of the series to date, we’ve seen her resent and disdain her abilities, only begrudgingly embracing them when necessary to solve a problem or protect herself (as much as she seemed to enjoy beating the crap out of a day-glo Wrecking Crew a couple of episodes back). But by being forced to defend that identity in court, Jen is forced to actually think about what it means to be She-Hulk, and how much that moniker has come to mean to her.

I doubt any of us expected that trademark law would necessarily make for a compelling—or even remotely funny—story, but Tatiana’s decision to copyright the name She-Hulk in order to slap it on her range of Goop-esque scam beauty products forces Jen to not only defend her brand in court but confront the fact that She-Hulk has become an intrinsic part of who she is. And maybe she never wanted to be a superhero, but it’s apparent that that’s now how the world sees her, and, more importantly, how she’s starting to see herself.

Could I have done without that revelation arriving after some intense public humiliation subtly laced with the misogynistic assertion that Jen, as herself, is somehow lesser than her superhero alter ego? Probably. But this half-hour makes me hopeful that She-Hulk’s first season is building toward the idea that Jen and She-Hulk are simply two halves of the same whole, and that as Jen embraces her new identity and all it entails, that awkwardness will go away. (Fingers crossed, at least.)

Notably, “Mean, Green and Straight Poured Into These Jeans” is the first episode of She-Hulk that doesn’t feature any surprise cameos or guest stars, and, as a result, is the first time that it feels as though the series has a clear and purposeful identity of its own. Yes, its humor is still deeply cringe in places—Jen really needs to work on her dating profile game, and far too many jokes still involve cracks about her physical appearance—-but the overall feel and focus of the show is the most cohesive it’s ever been. For the first time, She-Hulk doesn’t need Bruce or Wong for its central plot to function and the absence of all the special guest stars finally gives the rest of the show’s excellent ensemble cast a chance to shine.

Following a blink-and-you’ll-miss-it appearance earlier in the season, Hamilton fan favorite Renee Elise Goldsberry properly makes her debut as Mallory Brook, Jen’s co-worker in the Superhuman Law Division, and while we know very little about her at the moment, her non-nonsense attitude is welcome grounding force on the canvas that also helps flesh out Jen’s professional world further.  And after several episodes of doing little but cracking jokes alongside Jen, her BFF Nikki Ramos finally gets the chance to carry part of the episode on her own, in a subplot that not only highlights the charming chemistry Ginger Gongonza has with virtually everyone she comes in contact with but allows her to perform one of the most important and necessary duties for any superhero series: Sourcing the costume.

Yes, the introduction of underground designer Luke is essentially little more than a vehicle for bringing Daredevil into this show, but Griffin Matthews’s disdainful demeanor is spot on and Jen’s utter lack of interest in traditional hero threads is completely on brand. And, let’s face it, it will be so nice to (hopefully) see She-Hulk in a suit that doesn’t look like it came out of a dumpster at Men’s Warehouse next week.  Plus, I can’t be the only person who would probably watch an entire episode of Nikki and Pug exploring the underground world of bootleg superhero merch (The Avongers!!). I have so many questions—is there a version of Canal Street in this New York that sells rip-off Black Widow vests or Stephen Strange capes? I must know!

Marvel’s Avengers Superior Seminar | Hulk
The Legend of Zelda: Who Created the Triforce?
Taskmaster: Ranking Every Series From Merely Quite Good to Ludicrous Best
John Constantine Explores Teenage Chaos Magic in New DC Project
Why the Multiverse Could Be the Key to Wanda’s MCU Return