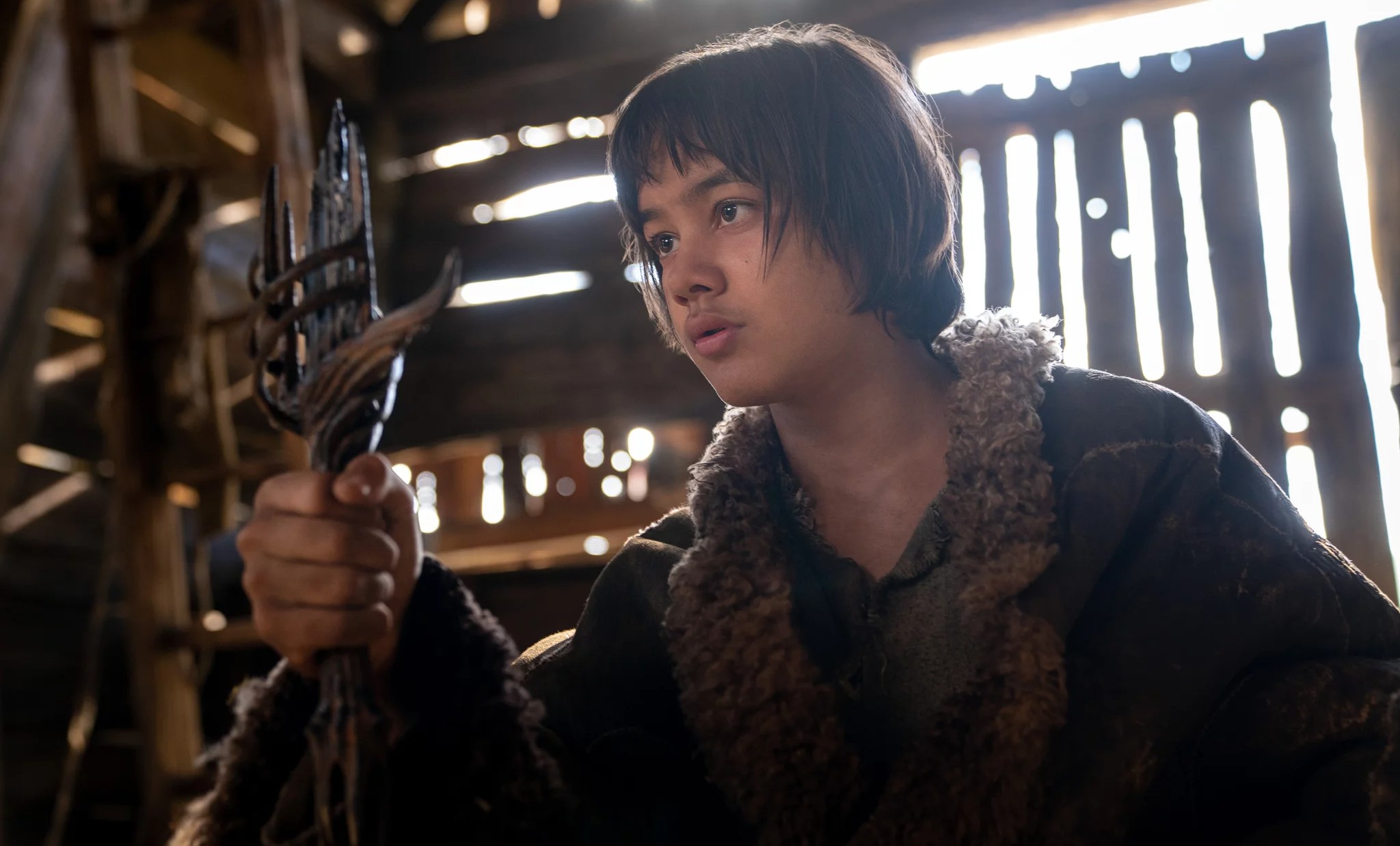 This Lord of the Rings article contains spoilers for The Rings of Power.

There are lots of special swords in Tolkien’s mythology – Narsil, the broken blade that Isildur used against Sauron; Glamdring and Orcrist, ancient Elven swords found in a trolls’ cave by Gandalf and Thorin Oakenshield; and Sting, Bilbo’s short sword from the same cave. But The Rings of Power seems to have introduced a new special sword into the story – and this time, it’s an evil one.

Back in episode 2 of The Rings of Power, young Southlander Theo found a mysterious sword hilt with the symbol of Sauron on it in a barn near his home in the Southlands (the land that will become Mordor). When a drop of Theo’s blood falls on the sword, it puffs up into smoke and the hilt begins to re-grow a full blade.

In episode 4, we found out a bit more about this mysterious weapon. An old man who also has a scarred mark of Sauron on his arm told Theo that “it is no sword” but rather a “power fashioned for our ancestors by his master’s own hand.” The old man goes on to talk about “the beautiful servant, he who was lost but shall return” and names this servant as Sauron (the master being ultimate Bad Guy Morgoth). So we know that this mysterious sword has something to do with Sauron, and it sounds like it was made for him by Morgoth.

Is the Evil Sword Just a Red Herring?

We think there are a couple of deliberate misdirection in this scene, though, as the show aims to stretch out its mysteries for as long as possible. The old man mentions the “starfall” that brought the Stranger and says that it “means his [Sauron’s] time is near,” presumably encouraging the audience to think that the Stranger might be Sauron. But note that he doesn’t actually say it was Sauron who fell, so the Stranger’s arrival indicating that Sauron is coming doesn’t imply it is the Stranger’s fault that Sauron is coming any more than it’s Galadriel’s fault that her washing up on Númenor is a sign of its impending doom. And we still think the Stranger is most likely Gandalf anyway.

There’s another possible misdirection at the end of the scene. The old man tells Theo to be ready and “save your strength, you’ll need it for what’s coming.” Then we cut to an Orc telling the Orc leader Adar that “they found it, it’s in the tower.” This could mean that the mysterious weapon the Orcs are looking for is the sword, and that the Orcs chasing Theo saw him carrying it and they now know it’s in “the tower,” i.e. the watchtower that Theo and the other refugees are staying in.

But there is another possibility, which is that the “weapon” they’re looking for is actually one of the palantíri. These ancient seeing stones can be used as weapons by showing people visions that lead them astray, and Galadriel touching a palantír in the tower in Númenor may have revealed to the Orcs told where it was. That’s perhaps a bit of a stretch, and it may yet turn out that they did simply mean Theo’s sword, but we’ll have to wait and see.

Who Does the Evil Sword Belong To?

But what is this mysterious sword anyway? Sauron was seen wielding a mace in the movie adaptation of The Fellowship of the Ring, in a tribute to his master Morgoth who also used a mace, and for most of the time after that he sits around in his tower looking around with his great big eye and having others do the work for him. Unlike many of his enemies, the Dark Lord doesn’t have much of a connection to a special sword in Tolkien lore. So why is there a fancy sword giving people his mark in the land that will become Mordor?

Some have speculated that the sword is Gurthang, a sword originally forged by a Dark Elf in the First Age and used by First Age hero Túrin to kill himself after he discovered his wife was also his sister (some of Tolkien’s legendarium is more similar to Game of Thrones than you might expect!). The old man’s description in episode 4 seems to make that less likely, though, as he implies strongly that the sword was made for Sauron by Morgoth.

Another theory is that this is the sword that will later belong to the Witch-King of Angmar, the leader of the Ringwraiths, with which he stabs Frodo on Weathertop in The Fellowship of the Ring. However, there are a few issues there. One, on a very basic level, it doesn’t look like that sword, the hilt is completely different. We also think that Halbrand is far more likely to turn out to be the Witch-King of Angmar than Theo, as the men who became the Nazgûl were warriors and leaders.

What is quite likely is that this sword is another “Morgul-knife” or “Morgul-blade,” since Elrond (in the books) and Aragorn (in the movies) describe the Witch-King’s sword as “a” Morgul-knife/blade, not “the” Morgul-knife/blade. Theo is young and may yet become a warrior or leader, and he may end up becoming one of the Nine Ringwraiths, and it’s possible that they all wielded Morgul-blades. The smoke that comes out of the blade in episode 2 as it re-forms itself is a reminder of the smoke that comes out of the Witch-King’s blade when Aragorn drops it and it disintegrates.

It’s even possible that this sword will be re-forged as the Witch-King’s sword, and this could still be the case even if Halbrand is the Witch-King, since swords can change hands. But we suspect that maybe this is another Morgul-blade, perhaps an even more powerful one, and an invention for the show, designed to fill the gap left by not being allowed to talk about the Silmarils, and not having any Rings of Power forged yet. In fact, perhaps when Sauron forges the One Ring, he will pour the evil energy from this sword into it, destroying the sword in the process, and connecting it even more firmly to Tolkien’s primary Evil Artifact.

One thing the old man said that does have us really excited is that “the beautiful servant” – that’s Sauron, who could appear very beautiful when he wanted to – is coming soon. We can’t wait to see how the series picks up once we actually get to see him!

The Lord of the Rings: The Rings of Power is streaming now on Amazon Prime Video.

13 MCU Theories That Were Too Good to Be True
How to Get All Cyberpunk: Edgerunners Equipment in Cyberpunk 2077
The Rings of Power: How Adar’s Origin Story Reignites a Long-running Tolkien Debate
Streaming Tomorrow | Marvel Studios’ Shang-Chi and The Legend of The Ten Rings | Disney+
Sci-Fi Short Film “The Recycling Man” | DUST | Online Premiere | Starring Benjamin Evan Ainsworth